A couple weeks back my Dad mentioned that my sister MSC would be in town one night for dinner. She has lived in Austin the past couple of years but would now be going off to Costa Rica for a couple months to work and live on a ranch/hostel. She had done this in the past, but this time will be for a longer term. Since she was busy unpacking her life at my parent’s house, they didn’t have a lot of time for dinner, so it was decided that we should find a place in the neighborhood.

Rossini’s is the quintessential old school Italian restaurant. I don’t think they have changed one thing in the thirty odd years they have been in business. I walked by countless times in my almost 7 years in the neighborhood, but never ventured in. It actually used to be a favorite of my Dad’s cousin, who brought my parents and Aunt years ago. They were not impressed with the restaurant at all and had never returned. Strangely enough, Blackboard Eats came out with a deal for Rossini’s back in February. Was the notoriously old-fashioned restaurant finally coming into the 21st century? This was our chance to find out.

After arriving, we saw that absolutely nothing has changed. From the dark covered walls to the pictures of various celebrities that dined there, right down to the tuxedoed waiters, we were back in 1978. Although I perused the menu beforehand(Yes, they actually have a pretty good website), I noted they charge Michelin level prices. Pastas for $22, most entreés for $30+. Last time I checked, Mario Batali had no affiliation with this restaurant, but it seemed like he set the prices.

The table already had a bread basket and plate of bruschetta for us to munch on. I wonder how long they were sitting there? I quickly found it that it must have been a while since the bread under the bruschetta was quite soggy. Take a look at that bread basket! 2 kinds of bread, breadsticks AND flatbread. You don’t see baskets like that served that often anymore. 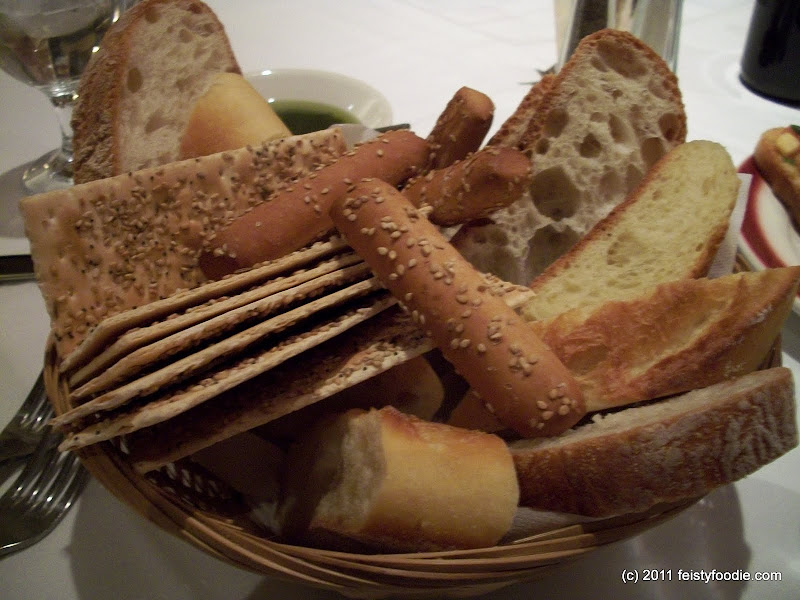 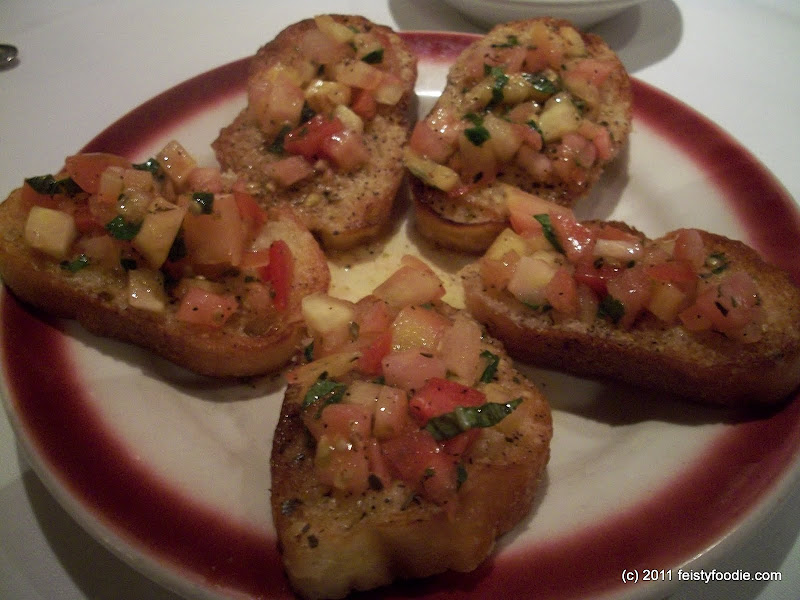 Since there was five of us and it was a huge table, I only took pictures of what CT & I ate. Also of note the restaurant was HUGE with tables spread a good distance apart. Not like most other NYC restaurants that tend to pack in as many tables as humanely possible and sometimes not possible. Unfortunately, we were also seated right next to the piano player. Yup, they have a guy playing all sorts of showtunes and of course Frank Sinatra.

CT started with one of the special appetizers of the night. Seafood and Avocado Salad. I am not sure how much it cost, but my best guess would be at least $15. I had a couple bites and it was nice with a good amount of fresh seafood with shrimp and scallops. The creaminess of the avocado pairs perfectly with shellfish. 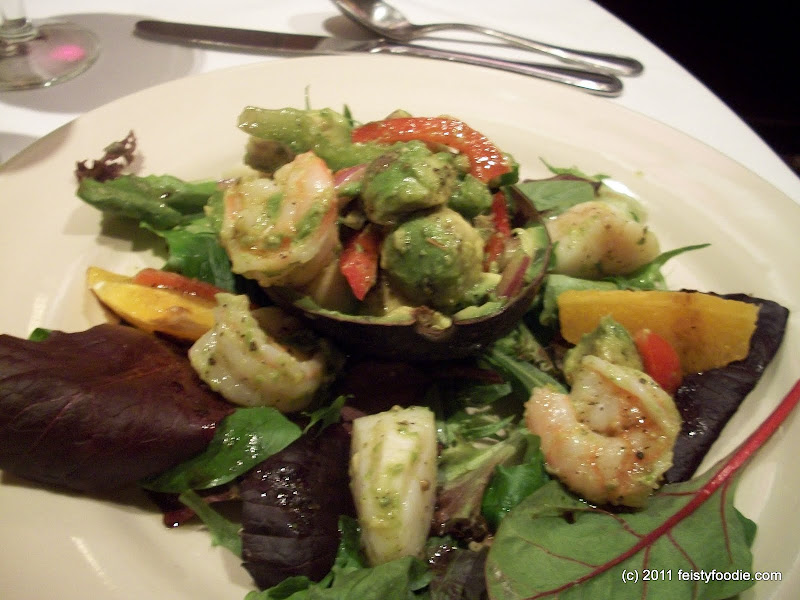 CT says: I wanted something light to start and I’m a sucker for an avocado salad. Though the overall prices were steep, I was happy to find that this salad did not disappoint. There was a solid amount of seafood, which seemed pretty fresh and well cooked. There was no fishy smell to it. Also, the avocado was nice and creamy, pairing will with the seafood. Overall, a good start to the meal.

I started with the fresh Spinach Salad served with a warm bacon dressing ($11). None of the appetizers really spoke to me, so I decided to stick to a salad. Of course, the bacon dressing caught my eye. Although it wasn’t very photogenic, it was tasty. The bacon was definitely present in the dressing without being too overwhelming. There were a few tiny bits of bacon sprinkled in between the spinach, but not enough to make the salad that un-healthy. 🙁 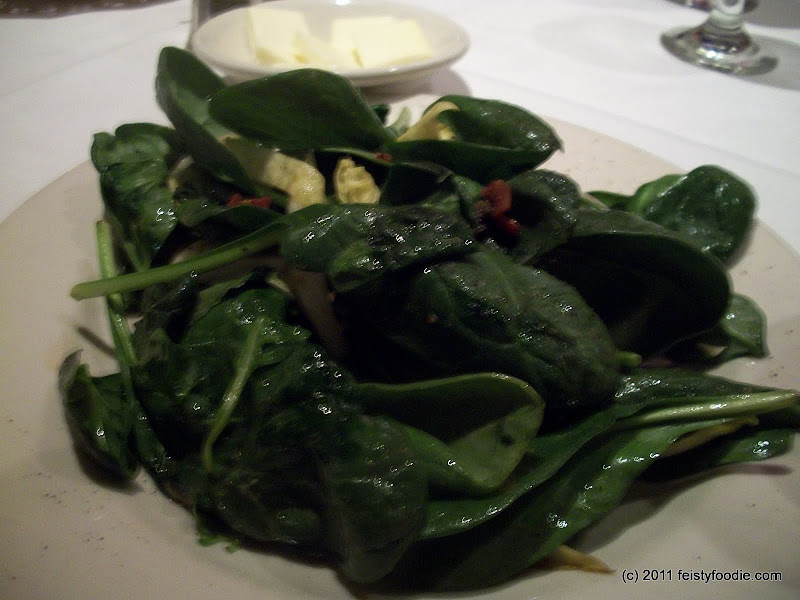 CT wasn’t super hungry so she had pasta for her main. Rigatoni al Filetto di Pomodoro ($22). The menu described it as “tubular pasta in a zesty pancetta and onion tomato sauce.” As you can see, her dish looks like something I make at home when I am bored. I think the parsley garnish sprinkled on the plate was actually cilantro. That touch of garnish keeps the 70’s alive! CT mentioned that any pancetta in the dish was microscopic. Pretty ridiculous to charge $22 if you ask me. 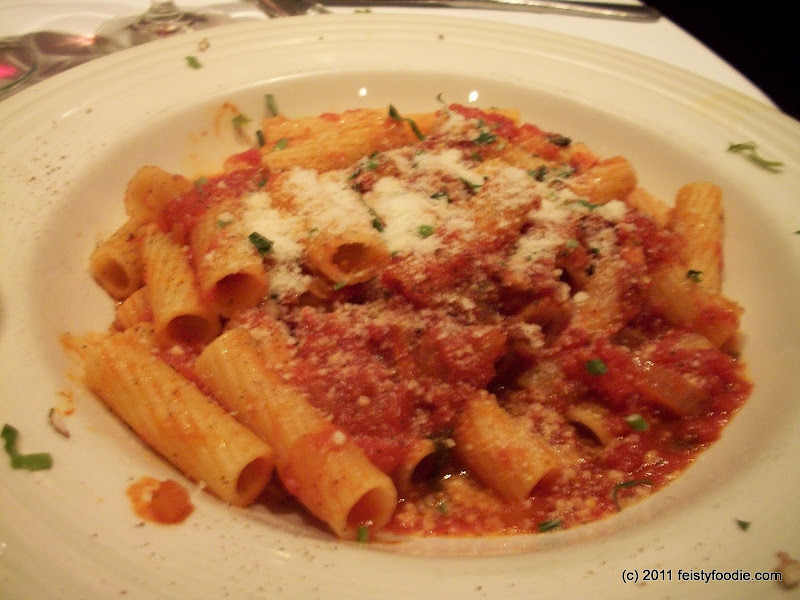 CT says: I realized this was a poor choice on my part, but I just wasn’t looking for a heavy meal. It wasn’t bad, but definitely not worth the money. The pasta was cooked well, but there was barely any pancetta. As TT said, I could make it at home, and it would probably have been better.

I was in a seafood mood so I went with the Calamari Casserola ($27). This was basically a bunch of sauteéd calamari in tomato sauce with a piece of garlic bread. It was actually quite tasty although the chef went a little heavy on the salt. The calamari itself was tender with the right amount of chew. I enjoyed the small bite of garlic bread even if it was a little oddly placed. 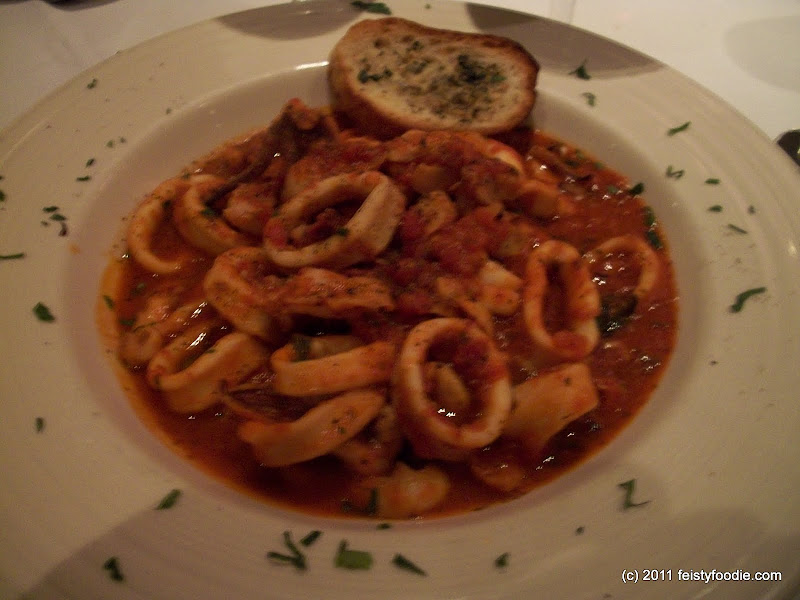 All in all, it was a pretty mediocre meal. The consensus at the table was that everything was just ok. With those prices, I would expect the dishes to be a little more spectacular. Service was attentive with all of our water glasses never falling below the full level. I was glad to finally try a restaurant that I walked by so often, but have zero desire to return especially without a 30% discount. Thanks Dad for taking the family to dinner before MSC headed down to Costa Rica.