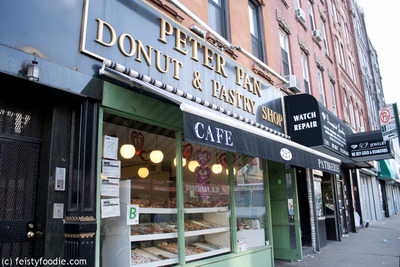 Following lunch at M Wells Diner with the other food bloggers, I headed over a short distance to Peter Pan Donut & Pastry Shop.  I’m a huge Doughnut Plant fan, but have heard for a long time from friends that Peter Pan Donuts is where it’s at – so of course I had to check it out.

I actually picked up three donuts – a regular chocolate glazed, a vanilla frosted with sprinkles, and a jelly with powdered sugar.  However, I didn’t take pictures of the vanilla frosted before I gave it to BF.  A few things to note: BF actually eats donuts fairly frequently and loves Dunkin’ Donuts’ “vanilla frosted” – which is a donut I didn’t even know existed until I heard him lamenting one day how he can hardly ever find it at Dunkin’ Donuts anymore.  In any case, he thought it was good, but only marginally so from Dunkin’ Donuts.  Slightly better texture. 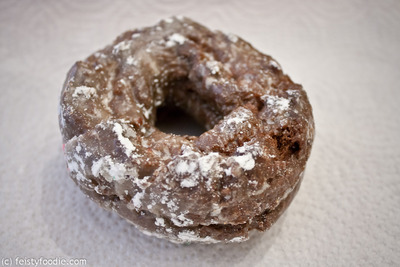 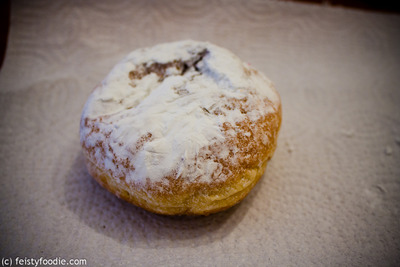 And the jelly, which is one of my favorites for regular donuts (well, I do love a fresh, still-hot regular glazed from Krispy Kreme…), was completely coated in powdered sugar on one side, while the other side showed a little more restraint in its coverage.  Biting into the donut found a wonderfully chewy donut, yielding to… 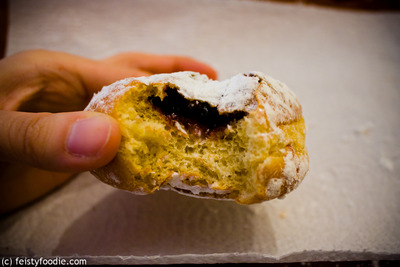 a blackberry-ish, raspberry-ish, jammy center.  Well, not exactly center, it was closer to one side than the other, as the picture shows, but you know what I mean.  And yes, this was a good donut – the jelly wasn’t too sweet nor too tart – and the donut itself was chewy in all the right ways.  But you know… I just can’t justify the price ($1 per donut) along with the travel needed to get donuts from Peter Pan.  I live 2 blocks from Dunkin’ Donuts… if I wanted regular ol’ Dunkin’ Donuts type donuts, I’d just go there for a quick fix.

Yvo says: While the quality is definitely better than Dunkin’ Donuts (I haven’t been to Tim Horton’s in New York so I cannot comment on that), it’s only marginally so, and at the end of the day, the increased cost with the travel necessitated by its location make it not worth it to me.  If someone offered me one, I wouldn’t turn it down, but I won’t go out of my way to get them either.  And in visiting Peter Pan myself, I realize that I cannot compare them to Doughnut Plant because DP makes specialty donuts with unique flavors and the like, which aren’t available elsewhere (which, of course, increases their value).
recommended, but I wouldn’t go out of my way for these again