I realize I usually reserve recipes for Recipe Fridays, but I have been baking so much lately that I have room for way more recipes!  I did promise over a year ago that eventually the site was going to switch over to more recipes and less restaurants… perhaps I’m finally making good on that promise?  😉  Plus, it’s a Monday… perhaps a particularly sweet one for you, perhaps not… either way, it’s the perfect time for a little treat. 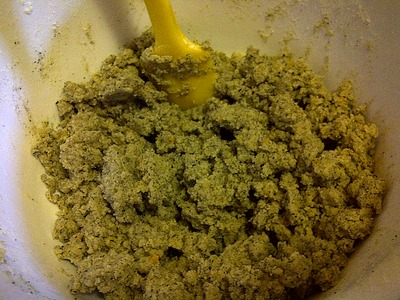 the dough, just as it’s come together

I was browsing around in a bookstore recently and stumbled on a recipe for what sounded really promising: cookies that aren’t all that sweet.  Tea cookies, if you will… made with actual tea.  Made with, in fact, Earl Grey which, if you know me, you know that I have about 5 pounds of loose Earl Grey tea in my apartment, because somehow word got out that I really like(d) Earl Grey tea, and 3 or 4 years in a row, every holiday involving gifts found me the recipient of more Earl Grey tea.  Yep. 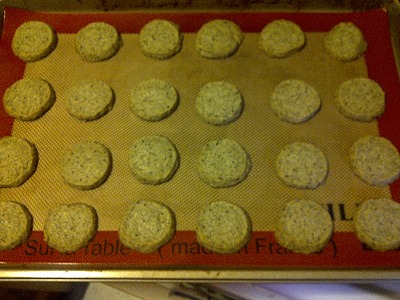 I’ll be honest: back in December, when I first started this strange baking project I appear to be involved with, I made cheese crisps/cookies.  They came out tasting OK – BF said “like Cheese Nips!” (look, if I want Cheese Nips, I can just buy the damn things) – with a few minor issues along the way, but most importantly, when I was trying to make it into a dough, all the frustration in the world wondering why it wasn’t coming together… and then suddenly it did… well, that experience really helped me with these cookies.  Why?  Well, it’s something that any really seasoned baker will tell you: you just know things because you’ve done it before, you’ve seen it, you know what went wrong or that this is just going to be that way.  Basically, I’d had trouble with the dough coming together with the cheese crisps, and as I worked the Earl Grey tea cookie dough, I realized it was similar to the cheese crisp dough.  So instead of feeling frustrated and wondering what I was doing wrong, or worrying that I was overworking the dough, I stayed calm and sure enough, it soon came together.  All was right in the world.

(Funny enough, the cheese crisps – which I’ll eventually get around to making again and then posting about – came out a little… wrong.  I posted a photo to Facebook, and Matt and Allison Robicelli [makers of the best cupcakes in the universe] both commented with some suggestions as to what I’d done wrong.  How could they tell at just a glance what I’d done wrong?  Well, as Matt put it, “It’s a gift called I’ve [made that mistake] a hundred times before.”) 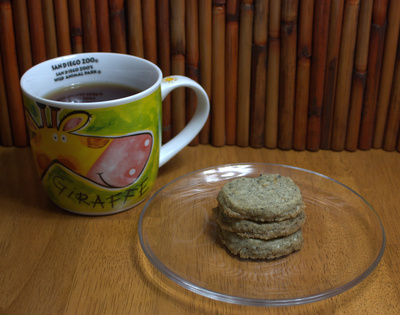 paired with, what else? Earl Grey tea

I think the best part of this was definitely the pleasure I experienced from the cookies coming out perfectly.  The texture was exactly what I want in a cookie: crisp as you bite into it, yielding gently to a pleasant chew.  The taste was fragrant from the tea, without an overwhelming amount of sugar, without a tooth-achingly sweetness… just right, with the orange zest popping in to say hello now and again. 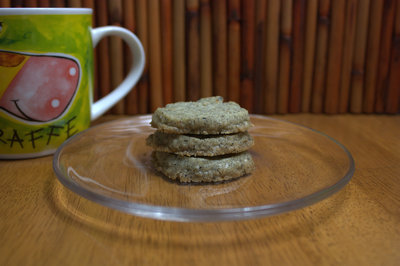 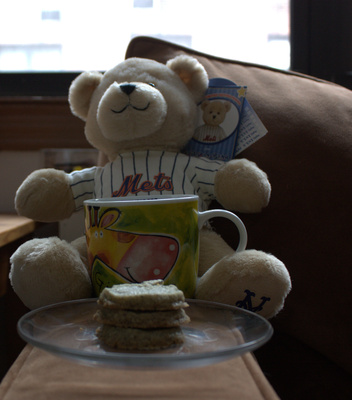 This is the cookie whose dough I now keep in the freezer, so when I’ve had a bad day, or when I need a little treat, or just whenever for whatever reason, I slice off a few, bake, and enjoy immediately.  It isn’t difficult to whip up a batch of dough, but as it does need an hour to freeze, some foresight is required… so keeping a roll in the freezer seems much easier. 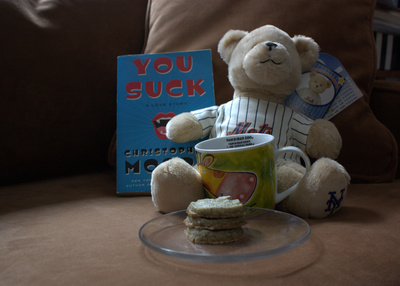 This is the cookie with whom I’d like to curl up with a book, a cup of hot tea, and the dog peering over at me expectantly. 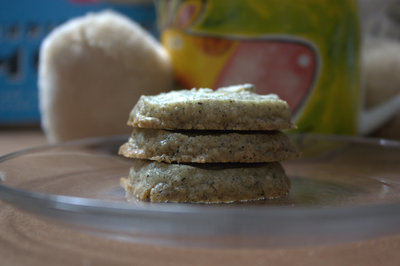 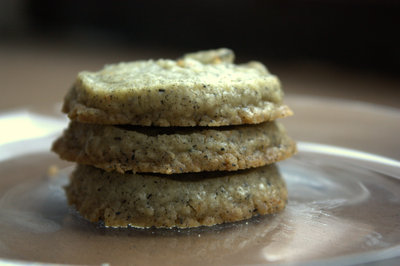 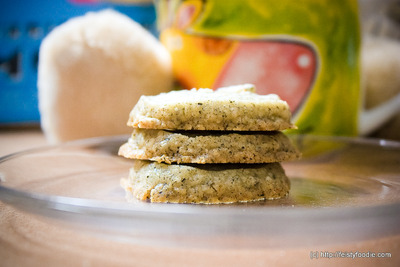 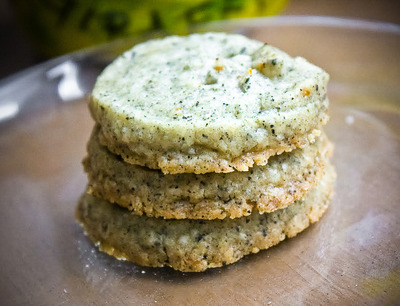 But then you must leave, because there is a log of dough in the freezer calling my name…

Whisk together flour, tea and salt in a bowl.

Put butter, confectioners’ sugar, and orange zest in a medium sized bowl and mix until pale and fluffy.  A hand mixer will help with this, but you can do it by hand as well.  Add the flour mixture in gradually until just combined and starting to form a dough.  (This may take a few minutes.)

Divide dough in half.  Transfer each half to waxed paper; shape into logs about 1 and 1/4″ in diameter.  Slide log, wrapped in waxed paper, into empty paper towel tube and freeze for at least an hour.

A few notes: I measured my loose tea first and then ground it.  The measurements will be slightly different if you do it the other way around; play with it to see what you like.  I also tried to use my small food processor to grind it, but this didn’t work all that well, so I transferred it to my trusty mortar & pestle, which made short work of it and was pretty fun.

Next, I actually made these twice.  The second time, I didn’t have any oranges to zest, and I happened to be coming to end of [one of many!] my container of loose Earl Grey, so I ground up three tablespoons of the tea leaves.  However, this made the dough crumble apart much more easily; it was difficult to get it to come together and slicing the remaining dough as frozen has been slightly difficult as it just wants to crumble apart.  The flavor wasn’t improved much – in fact, this batch left a slightly grainy feeling in the mouth, even going so far as to occasionally leave tea leaves in the mouth, ugh – and the zest was sorely missed as a bright boost complementing the bergamot in the Earl Grey.  So… you can increase the tea if you like, but I suggest not as much as three tablespoons total.  And don’t skip the zest – if you don’t have orange, I would even try lemon or lime for a twist.

And after all that work: enjoy!!!

« Bogart: Eulogy for the Best Gray Kitty Ever
McCormick and Schmick’s »