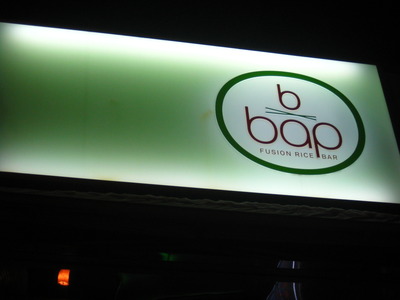 One recent Friday, StB and I made plans to see a movie – Black Swan, actually.  We wanted to grab a bite beforehand, and she chose Kashkaval, which I’d enjoyed and she wanted to try.  Unfortunately, it was so packed that even after waiting for 40 minutes, there was no table available, so we walked over to b bap, a rice bar that StB had walked by on her way to Kashkaval and noted for its complete.emptiness.  Literally, not a single soul aside from the workers were inside when we walked in, though a few people wandered in, ordered, and left, while we were eating.  We decided it was more of a lunch spot, so it’s probably busier during lunch than at night. 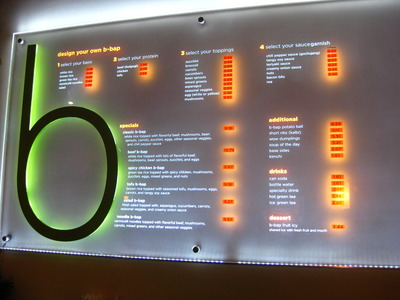 The concept here is that it’s a bibimbap bar – basically Subway, but with rice (or noodles, or salad).  You pick your base (white rice, brown rice, green tea rice, vermicelli noodles or salad), then your toppings.  I didn’t take a picture, but the person serving you stands behind a counter and scoops things out on top of your base as you point to them. 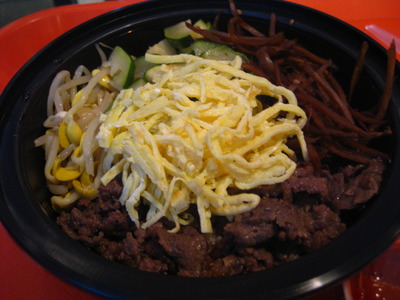 StB chose green tea rice, topped with bulgogi, bean sprouts, zucchini, burdock root and the middle pile is shredded egg.  You get your choice of a sauce; she chose gochujang.  Hers came to just over $10. 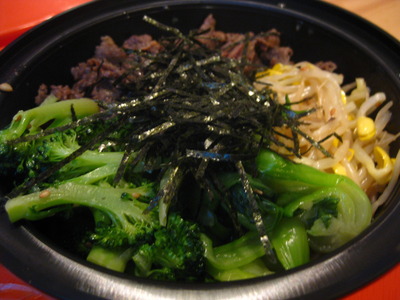 I chose green tea rice, bulgogi, bean sprouts, broccoli, bok choi and seaweed.  Mine came to $10 flat.  I chose sweet onion sauce, but when I saw it, I realized it is salad dressing – I’ve bought it many times over the years, a thin yellow dressing flecked with black (pepper), sometimes Vidalia onion dressing is the name.  And it’s good, though not usually served with rice – haha, it was for the salad, oops.  Hey, I wanted to try something different. 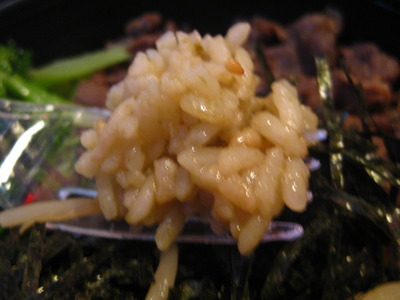 A (blurry) close up shot of the green tea rice, which had a nice green tea bitterness to it.  Reminded me of drinking genmaicha (green tea with roasted rice), which I adore.  The bulgogi was nicely flavored, and not at all dry or overcooked, and the vegetables were sufficiently tasty.  The seaweed wound up blending into the rest of it and adding the occasionally kick of seaweed flavor, but it wasn’t necessary to the dish.  And the sweet onion sauce wasn’t actually all that bad on the rice – not something I’d think to do myself, but since I had it, I tried the combo and it was interesting.  Mixing everything together made it quite tasty. 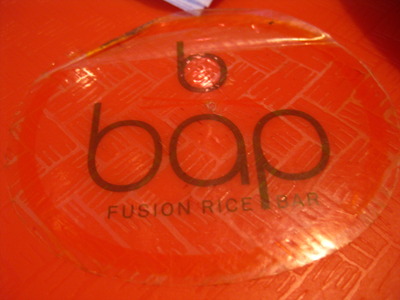 The place was super clean and fairly new; this sticker was on my tray, though not on StB’s. 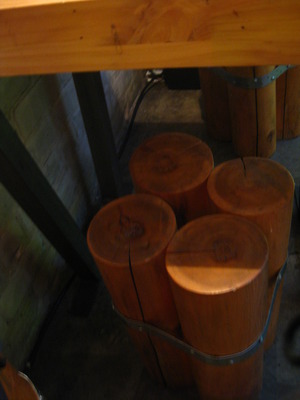 The decor was adorable – these low stools made of ‘bundled logs’ weren’t the most comfortable but hell, it’s a quick eat it and go kind of place, not really meant for lingering.

Yvo says: While I was satisfied with my portion, I did think they were on the small side for $10.  StB pointed out that bibimbap is at least $8 in Koreatown, but these portions were definitely smaller and the toppings catered towards a non-Asian palate in some instances.  However, it was tasty, and StB said that if she worked in the area, she could definitely see herself ending up here for lunch once a week.  It’s something different from all the usual crap and it’s definitely cheaper than K-town, though also on the smaller side.  Plus, as TT just said to me, “Non-dolsot bibimbap sucks.”  (Dolsot means the bibimbap is served in a hot stone bowl, so hot that it continues cooking the rice until there’s a crispy crust of rice… so good.)
not a bad lunch option
I fully admit that this place makes me really, really, really want to do a +/- but I’m not going to copy someone else’s blog style