For the past couple of months, CT & I have been trying to get together with MT, of mapo tofu fame, for yakitori.  For those that don’t know, yakitori is the Japanese version of grilled meats and vegetables.  It is especially focused on offal such as chicken hearts and gizzards.  It has been a while since, CT & I had yakitori, so we were really looking forward to it.  Yes, we did have Indian Brunch a couple hours before and the FBM Holiday Potluck the day before, but it was also the last chance for all of us to get together before CT left for her trip to South Africa.

Since CT is on her way to South Africa as I type this, we unfortunately won’t be able to get her perspective on the next couple of posts.  To make up for this, I heard she may be blogging while on her trip. YAY!

After a little confusion with MT about which restaurant, since there is Yakitori Taisho and Oh Taisho a few doors down from each other on St. Mark’s Place(same owners), we sat down at our little table.  It was a small little restaurant, which was expected in the East Village.

MT ordered Sweet & Sour Pork for us to start with.  The sauce was a little too sticky sweet for me, but it didn’t prevent me from eating my fair share. 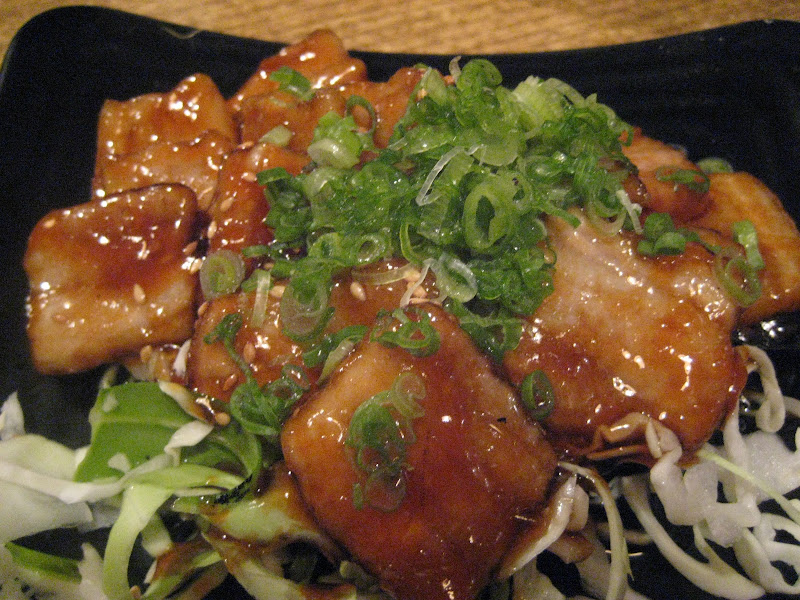 When CT saw the Grilled Skate Wing on the menu, she insisted on ordering it.  There were no complaints from me, since we both enjoyed it so much at Robataya.  I think they left our order on the grill a little too long.  See all that char?  It was also a lot harder to eat this time since it wasn’t as tender.  Almost jerky like.  I still ate it eventhough it wasn’t as good this time around. 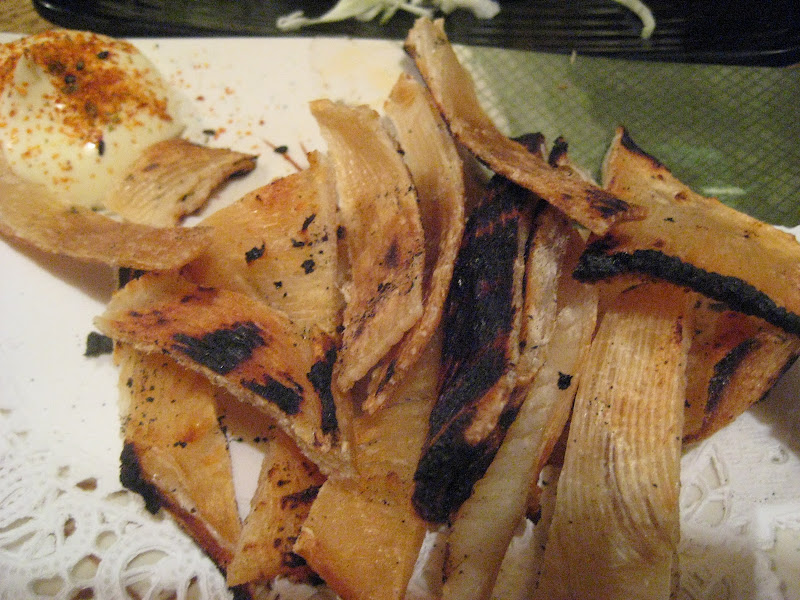 I was in charge of ordering the yakitori.

Chicken with Spicy Cod Roe.  Juicy with a bit of spice from the roe. 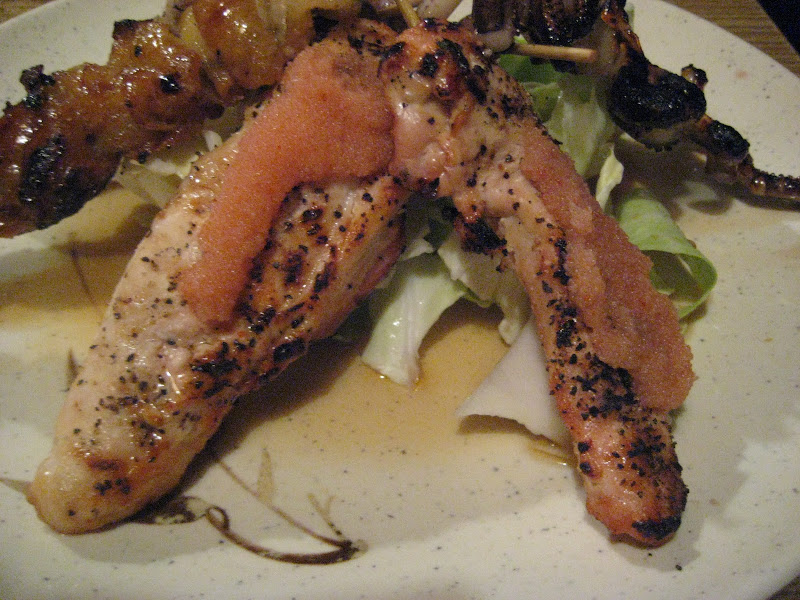 Grilled Squid Legs.  These were pretty meh.  A shame since I like squid a lot. 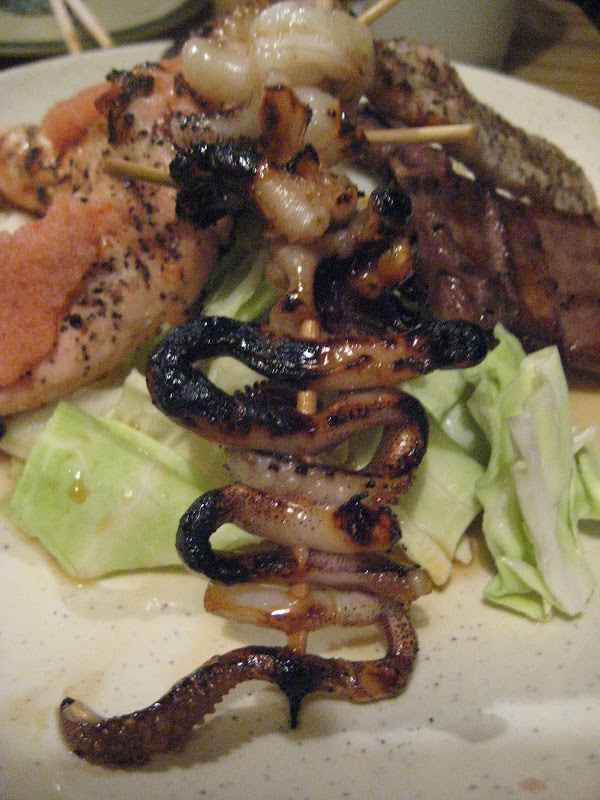 Pork. In the relatively short time between ordering and being served, I forgot some of the skewers I ordered.  I thought this was beef due to the flavor, but am pretty sure it was pork.  If I can’t tell what it was by flavor, I think that sums it up well. 🙁 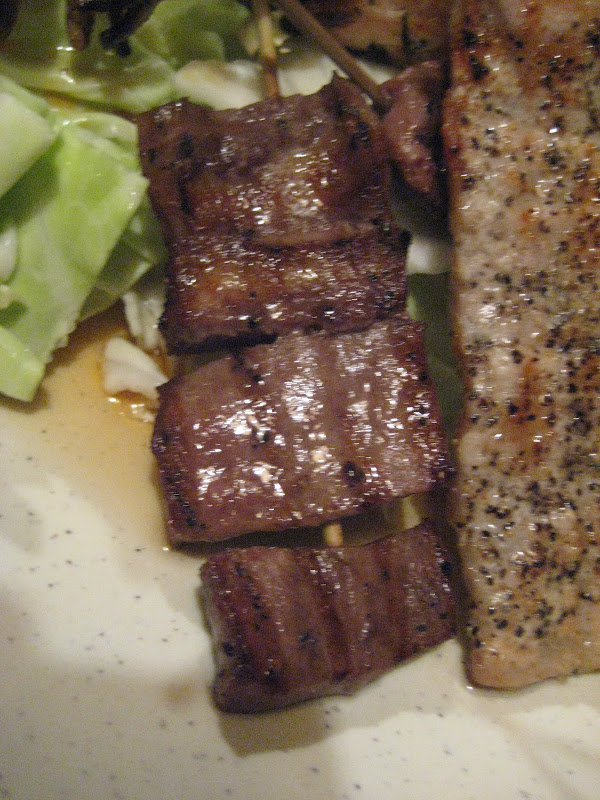 Chicken.  This was also surprisingly juicy.  There was a bit too much salt & pepper, but still edible. 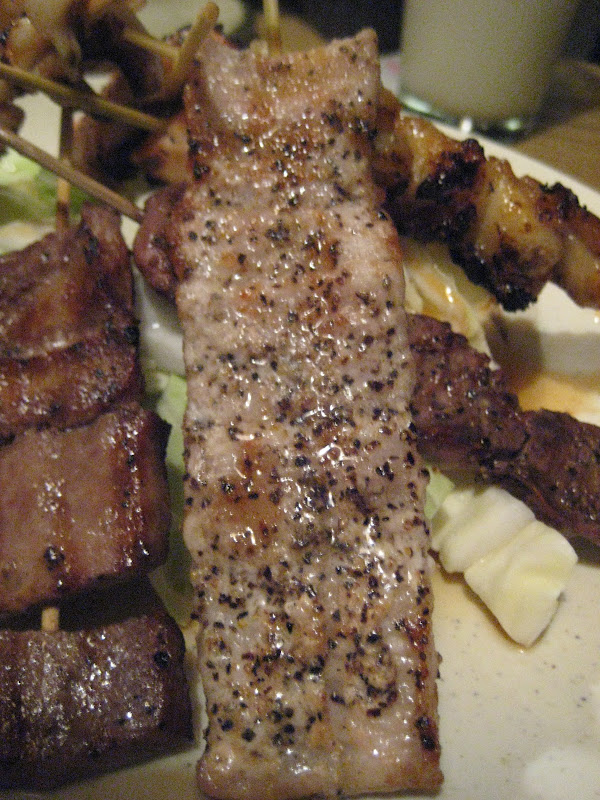 Chicken Hearts(left) and Chicken Skin(right).  Although they are pretty bad for you, I have grown to appreciate chicken hearts.  Whether served Rodizio-style or yakitori, grilled chicken hearts are yum.  They were nice and chewy with a deep meaty flavor.  The chicken skin was ok, just not crispy enough. 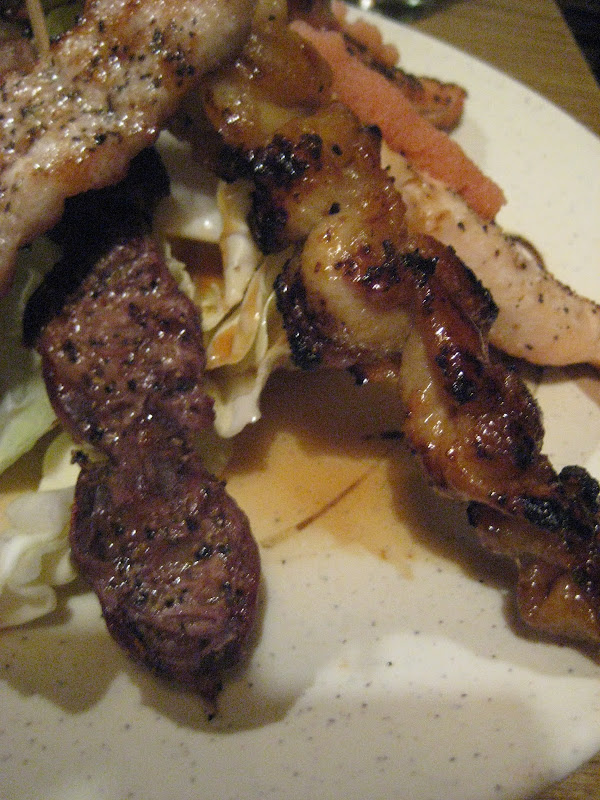 MT ordered the Kimchi Yakiudon, which was Udon noodles sauteed with kimchi and pork.  I had a little of this, but it was hard to eat with chopsticks since the sauce made everything so slippery.  The sauce like the sweet and sour pork was also a bit too sweet for me. 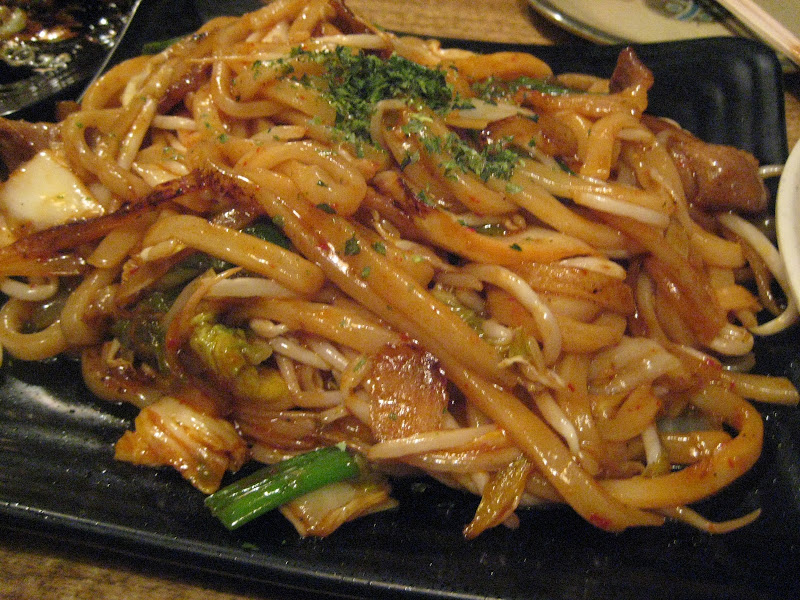 CT & I saw they had Grilled Rice Balls on the menu.  We never heard of these before since we were used to the cold ones you get at Cafe Zaiya and the like.  We got one filled with the same Spicy Cod Roe that came on the chicken and one with Bonito.  They were both pretty good especially with the crispy rice on the outside.  It reminded me of the crispy rice you get with dolsot bibimbap.  The cod roe was spread out uniformly through the rice, while the bonito was in one big clump in the middle.  I would definitely order one of these on the side again. 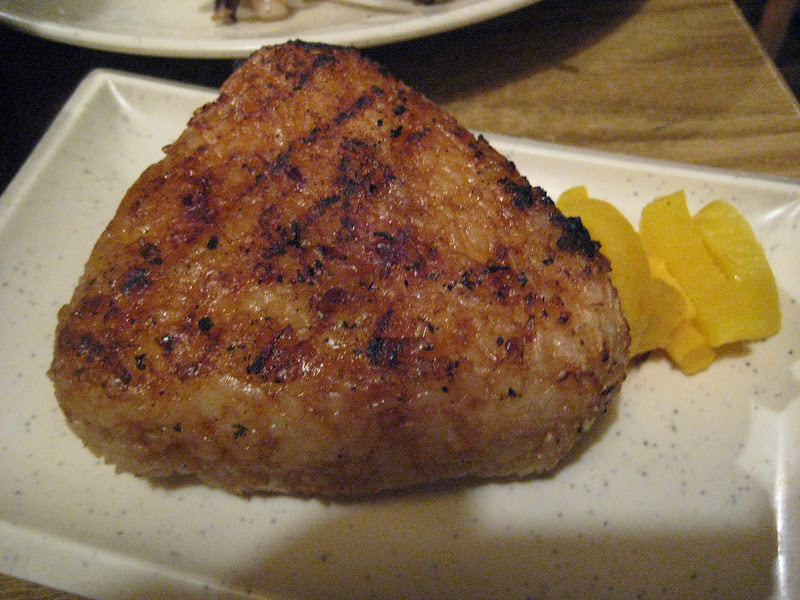 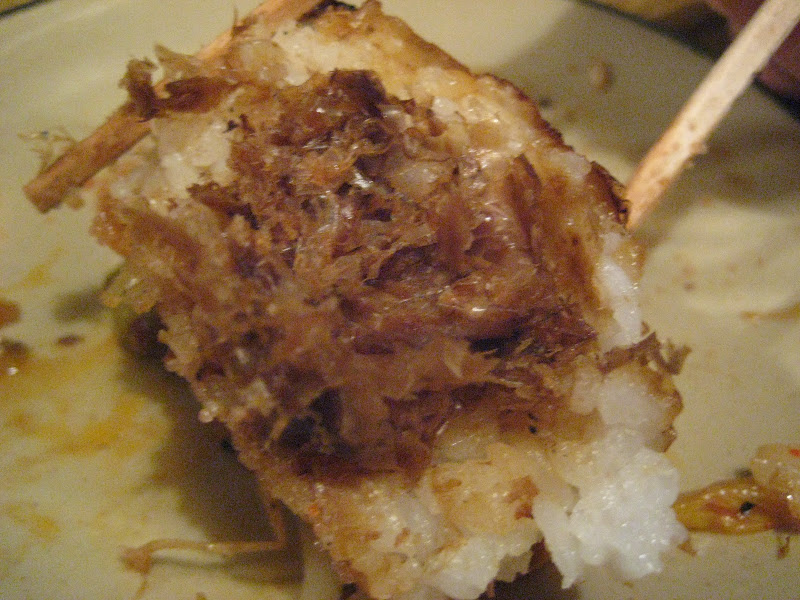 All in all, it was a very enjoyable meal to end the weekend of massive eating.  Grilled meats are so simple, yet so delicious.  I also forgot to mention, it is cheap!  I think the total bill with some drinks was about $25 per person.  The restaurant was quite small, so if you are claustraphobic you may want to go to another yakitori place such as Yakitori Totto or Soba Totto.  Have a ton of fun on your adventure in South Africa, CT!