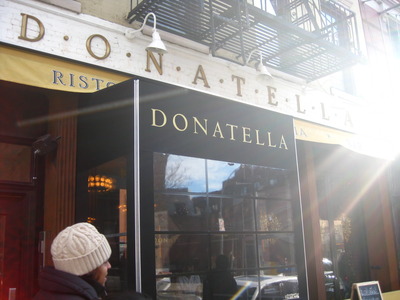 On a chilly clear Friday recently, Niko of Dessert Buzz invited me to join him for a tasting of the desserts at Donatella. 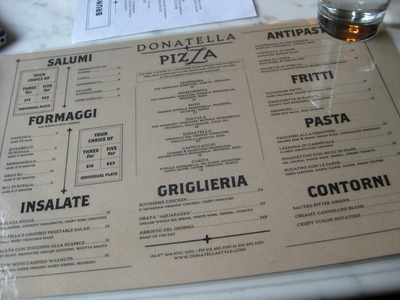 Of course, once we sat down, it was clear that we had to taste some of the savory items too… right?  Right! 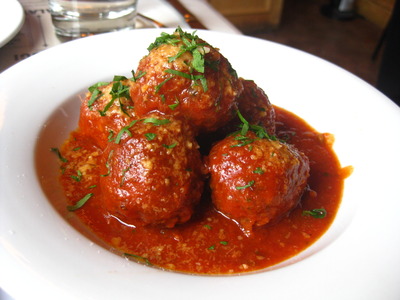 We started off with an order of Donatella’s famous tomato braised veal meatballs.  I have this thing for meatballs properly done, and these were pretty good.  Not too much bread crumb, but not too little, either, which I’ve found gives a meatball a dense, hard texture, more like a burger, very soft and lots of flavor in the sauce.  I can safely say we both liked this quite a lot, as I quietly mopped up the sauce with my meatballs, yum, and Niko tried to refrain from eating more in order to save space for dessert. 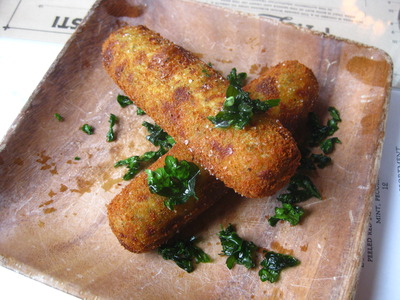 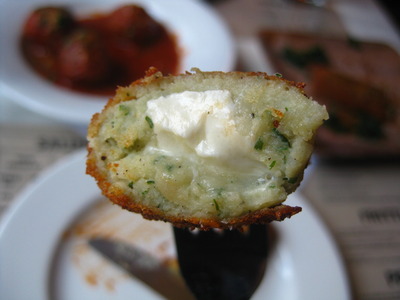 Crunchy exterior with creamy, gooey mozzarella hiding inside.  Love.  The mashed potatoes surrounding the mozzarella were nicely seasoned… yum.  I could have dogged the whole plate. 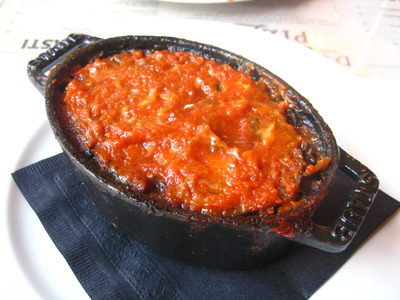 Donatella herself came to speak with us for a few minutes, and when I asked what dish she would strongly recommend, she thought for a few moments and decided to send us some of her eggplant parm.  The recipe took a long time to perfect – apparently, it was her great grand aunt’s recipe, who would make it in a giant Staub pot – layer after layer of super thinly sliced eggplant – baked to perfection in the oven.  The mini Staub cocotte warmed my heart – it comes to the table piping hot, but mostly because I appreciated the Staub over Le Creuset choice here 😉 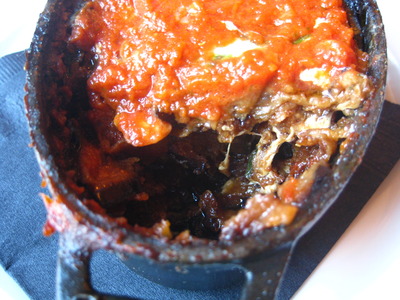 Look at that perfection – thin slices of eggplant layered with mozzarella and sauce, then baked.  HEAVEN. 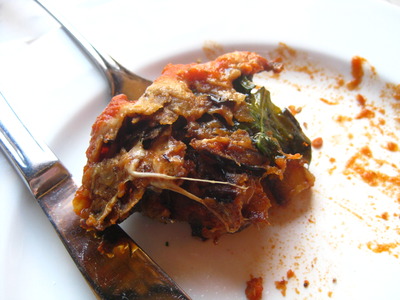 I really, really liked this dish and wondered why I don’t order eggplant parm more often… oh right, probably because people deep fry the eggplant and make it into a greasy, oily mess.  Not so here – there was oil in the dish, of course, but it added flavor, not just heavy oil, and it tasted… absolutely… wonderful.  Mmm. 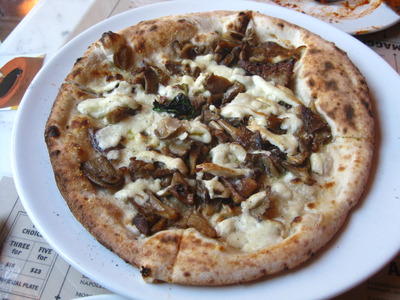 And because everyone raved about the pizza, we decided to split a pie: the cappellaccio; charred & marinated mushrooms, smoked buffalo mozzarella, pecorino, basil. 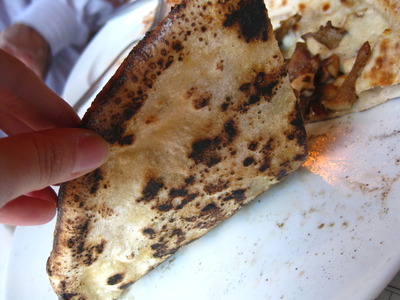 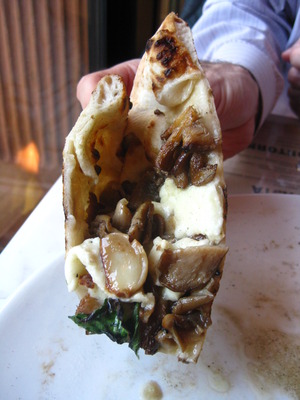 Incredible.  The smokiness from the mushrooms and mozzarella was enhanced by the smokiness of the wood-fired oven, creating this incredibly smoky, delicious pizza with a crisp crust.  I love, love, loved this pie – I’m only recently getting into smoked cheeses, and loving them so much!  The meatiness of the mushrooms really took this pie to a new level.  Mmm. 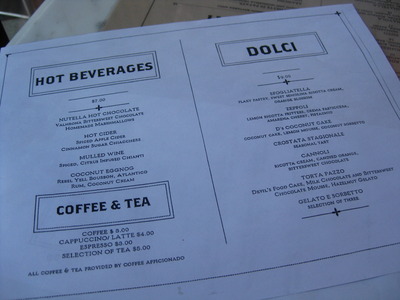 Finally, Niko’s specialty, dessert!  Pastry chef Andrea Jarosh came around to discuss with us the desserts, her methods, the ways of thinking behind each dessert.  The intense passion in her words and just how easily she described each dessert… it was awesome.  I love meeting people who are so passionate about their work.  She’s also super young, making her story even more incredible. 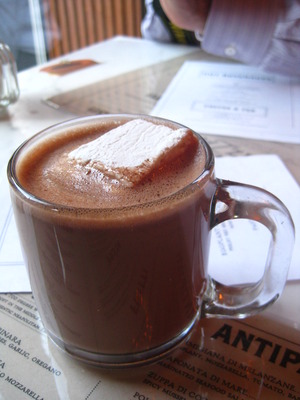 I promised Niko to leave the dessert reporting to him, so I didn’t take photos of the desserts, but this Nutella-laced hot chocolate (Valrhona) topped with a homemade marshmallow?  YUM.  Not too thick, just perfect on this chilly day. 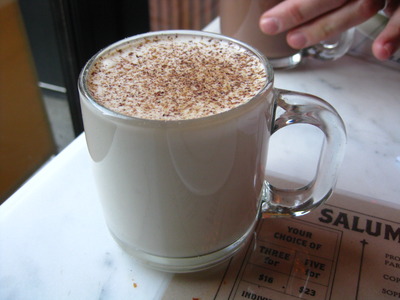 Though we’d ordered two Nutella hot chocolates, this came out instead: eggnog made with coconut milk.  Coconut is one of my fairly serious allergies, so I didn’t try any, though it smelled amazing.  The nutmeg scattered on top gave off its aroma enticingly, but I managed to refrain.  Chef Andrea informed us that it was her playful take on eggnog, coming from a part Puerto Rican family, sort of a marriage of eggnog and coquito.  Niko said it was really damn good, and I lusted after the cup, but didn’t risk it.  Ah well.

Our desserts came out shortly after that – Niko’s write up can be found here!

The above meal was entirely comped by the restaurant & its PR.  I was under no obligation to post any opinion, positive or negative, at all, and received no monetary compensation to do so.  In fact, I’m not even sure they realized I was a blogger or just a friend of Niko’s.

Honestly, I enjoyed my meal above so much that when I realized it was falling to me to pick a venue for FC’s annual holiday dinner – the next night – I immediately thought, hey, let’s go to Donatella.  I was luckily able to make a reservation for the next night – Saturday – at 6:30, a little on the early side, but not bad.

And the pictures are a lot darker because it was nighttime and we sat inside the restaurant instead of next to the windows… derp.  🙂 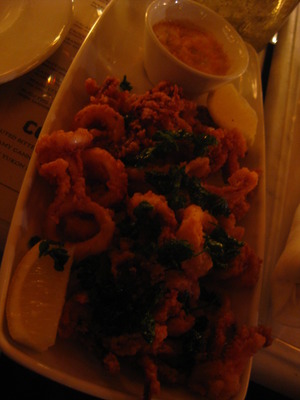 Our starter of fried calamari was crisp and average, save one thing: the lemon-bottarga aioli, which elevated it to new heights.  I really liked the aioli, which that night, I’d thought was simply lemon aioli, but looking at the menu, I realize there’s bottarga in there – dried salt cod roe, which I LOVE.  Adds a nice umami depth to it… yum!!! 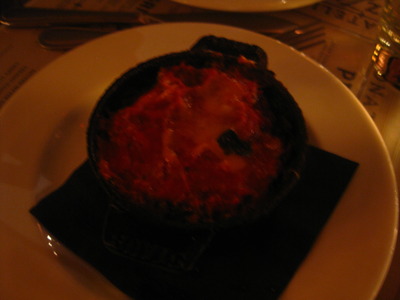 I mentioned enjoying the eggplant parm the day before, so HBBF ordered it.  I think he liked it – I noted how the shape of the mini Staub was round this time, as opposed to the oval shape I’d had the day before.  He shared with HB, and though he said it was a little too salty, she disagreed. 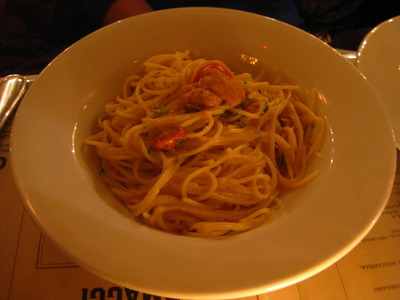 HB ordered spaghettini con ricci di mare, whose description reads: sea urchin, white wine, fennel and cherry tomato.  I know she liked it, though I don’t have any actual sound bites for you. 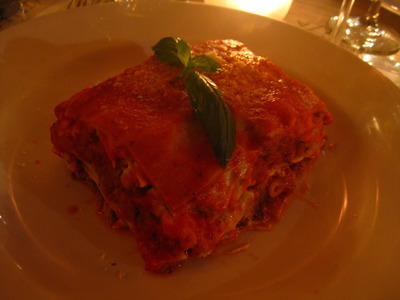 The day before, when Donatella had come over and I’d asked her what she recommended, she mentioned the lasagna, but then dismissed it as a bit too heavy for lunch, and also noted that since we’d ordered meatballs, which are in the lasagna, we should be OK.  So I had to order the lasagna, and she was very right about it being too heavy for lunch.  Perfectly cooked sheets of housemade pasta sandwiching layers of meat, cheese, and sauce… mmm.  I actually couldn’t eat the whole thing, and had half of it boxed up, eating it later in the week for lunch.  So good. 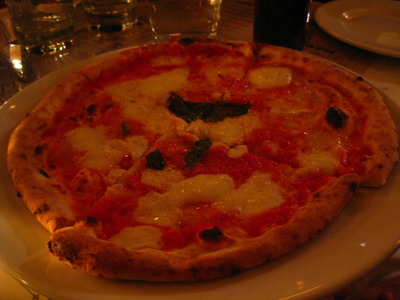 BF ordered the margherita pie, and liked it a lot. 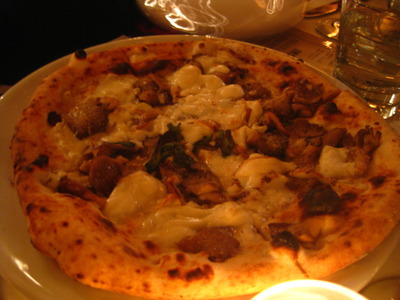 StB, at my suggestion (when the special pie was out – a spicy pie with chili pasta), ordered the capellaccio, which she said was fine but she prefers pizzas with tomato sauce, so this wasn’t high on her list. 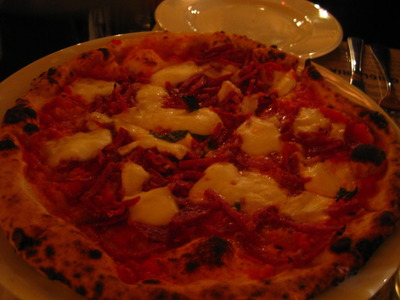 HBBF ordered the diavola pie, which has San Marzano tomatoes, buffalo mozzarella, pecorino, spicy salami and chili oil.  He liked the pie overall but said the salami detracted a bit from the overall pie, making it a little too salty.  I tried a piece of the salami, which I thought was nice and meaty, but I guess if it was all over my pie, I might find it too salty too. C2 or StB’s fiance ordered the Donatella pie, piennolo del vesuvio tomatoes, stracciatella, argula and basil.  StB wound up eating a lot of this, preferring it over her own pie as it had tomatoes… I’m not sure how C2 felt about it since I didn’t get to ask him, but he seemed to enjoy everything overall. And time for dessert!  BF chose the coconut cake, despite my scowled “You can’t kiss me after that!”  He really liked it – which surprised me; I guess I never asked if he liked coconut and just assumed he didn’t.  In any case, he devoured the whole thing with the quickness. HB and HBBF shared an apple tart topped with fresh whipped cream.  I imagine it was quite good as I saw both of them eating it without much comment. 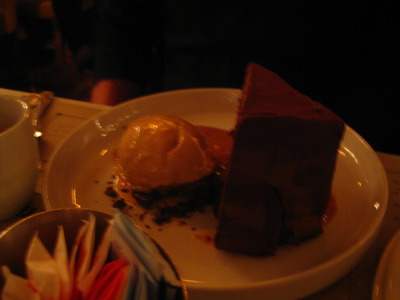 C2 ordered the torta pazzo, the crazy cake, which StB quickly turned the plate away from me when I tried to snap a photo because she’d begun eating his slice already, hahaha.  I know they both liked the cake a lot, though I’d thought it a bit too rich for me the day before – but I’m not quite as into chocolate as most people. StB ordered the zeppoli, after I’d raved about them – especially since they float atop a cloud of lemon pastry cream alongside delicious amarena cherries… mmm.  I think she liked them. Surprising myself, the winner the day before had been the sfogliatella, a wonderful flaky pastry filled with this incredible mixture of ricotta and candied orange peel.  When Chef Andrea had described it to me, I’d immediately thought “Yeah, not going to like that” based on ingredients.  But I tried it, and discovered I really liked it.  Yum.  The slightly eggy center, with a wonderfully lightly sweet scattering of candied orange peels… crisp exterior… very good.  I would eat these all the time if I could, they aren’t that heavy where after a meal like we’d just had, I couldn’t eat it.  It was perfect. I also ordered the Nutella Valrhona hot chocolate, but this time found it a bit too dense and thick, too rich for me.  A little too sweet, though BF had fun trying to steal my marshmallow, much to my chagrin.

The meal total, for 6 people, came to about $50/person or $100 a couple (with a bottle of wine and all of the above food).  As StB later remarked: dinner with two of my favorite couples!  Service was great – our waiter was incredibly patient as we perused the one-page menu and asked questions, and funny to boot.  We had a good time… oh, and funny moment: the waiter offered to take our picture while we were eating, and I said oh maybe when we’re done eating.  So when we were done eating, I stood up, holding my camera, to look for him.  Donatella happened to be standing right there, so she offered to take a picture of us.  Awesome – it isn’t everyone who would bother to offer, and I wouldn’t have thought less of her if she didn’t, but I definitely think better of her that she did.  (I don’t think she recognized me, nor did I expect her to.)

Yvo says: A very positive experience both times, and I didn’t eat a single thing that I really didn’t like.  I did like some dishes more than others, but all were quite tasty, and a return visit is in short order… yum.  Reasonably priced, really good, and a nice atmosphere to have dinner with a couple of friends… or even an intimate date (though it gets a bit loud in there).
recommended

Disclaimer: The beginning portion with excellently lit photos was compliments of the restaurant & its PR. The latter portion, with awful, dark, blurry photographs, was a night out with my friends, for which we paid ourselves.  Regardless, I was under no obligation to post a review, positive or negative, and received no monetary compensation to do so.  Opinions expressed herein are mine alone except where I credit other people with them.  I feel really silly posting this every time I have to, but in this case even more so – look, I got a free meal, and then brought 5 other people with incredibly varying and somewhat picky (some of them) tastes there the very next day, to spend out own money, and if that isn’t a personal endorsement, then I don’t know what is.