My sister, MSC, recently came up from Austin to visit and have a minor surgery performed. NYC does have the best doctors in the world afterall. She was going to stay with me the night before since the procedure was so early in the morning and it would have been a pain to come from my parent’s house in NJ. We decided a low-key, casual dinner was best in order to ease MSC’s nerves. I chose my go-to pizza delivery place, Patsy’s, since it is close by and has a nice dining room too. Ironically enough, in the six years I have lived in the neighborhood, I have never actually eaten there, only ordered delivery or take-out.

Most of the dishes there are served family style, so we ordered a whole bunch of food for the five of us to share.

We started with an order of Fried Zucchini & Eggplant with garlic yogurt dipping sauce. I had this before as a delivery item and liked it a lot. It was one of the few fried dishes that held up relatively well with delivery. The zucchini and eggplant are sliced super-thin and lightly covered in a tempura-like batter. I could eat these all day long. The dipping sauce helped cut through the saltiness of the dish. You can’t see the sauce in the pics, because for some reason the chef plated it underneath the huge pile of “chips.” 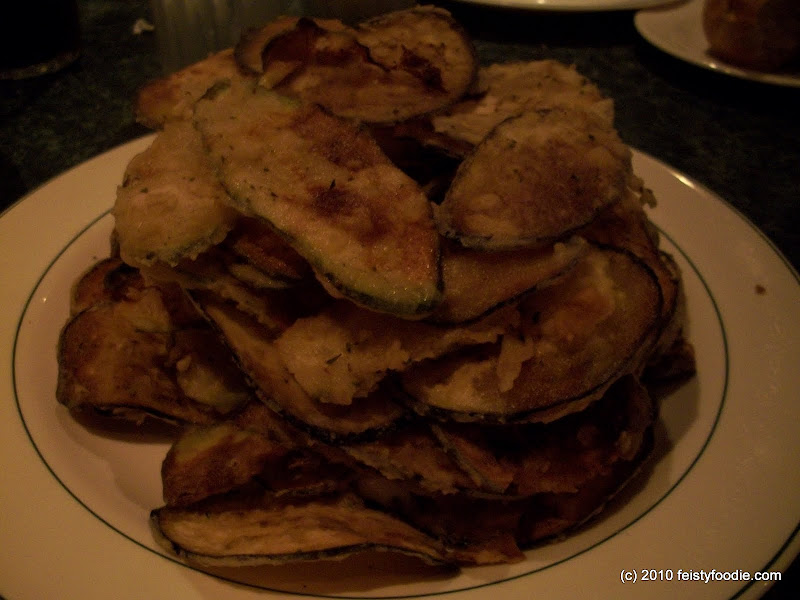 CT says: I liked these, but I think I would have preferred them just slightly thicker. They were nicely crisp, but it was hard to taste the vegetables’ flavors. However, as a chips and dip platter, they were great!

Although, we already got our serving of vegetables above, hehe, we also ordered a salad. We chose a family sized Organic Baby Greens with goat cheese, walnuts, beets, and a white wine balsamic vinaigrette. This salad was HUGE! It was more than enough for five people. It was definitely worth it at about $21 considering the size. It was dressed nicely, which most restaurants seem to have problems with. 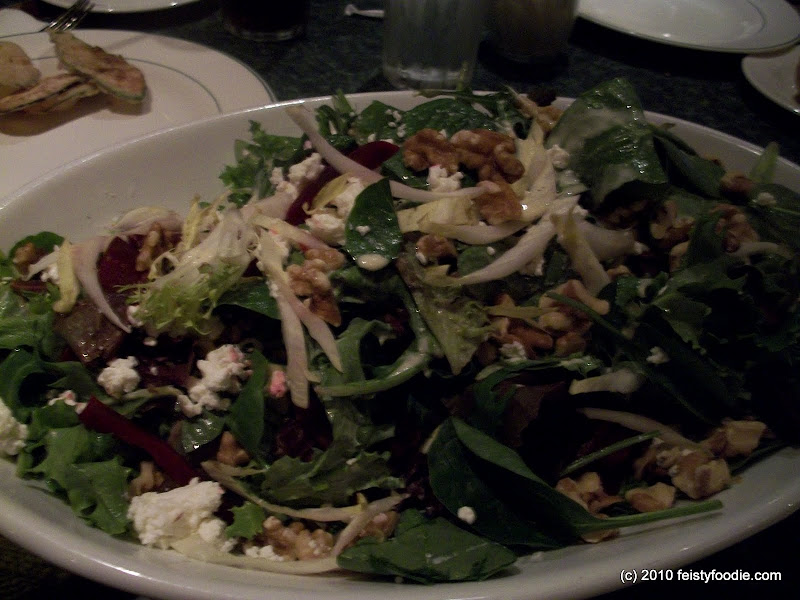 CT says: I really enjoyed the salad! When it first came, nobody expected it to be finished, but it was! The proportions of lettuce to the beets and cheese was perfect, with a little taste of each with every bite (walnuts too, but I don’t love nuts, so I carefully avoided most of them). As TT also mentioned, it was nicely dressed, to give it flavor without drowning the salad.

Since Mom has been having some issues with tomatoes, we ordered a large White Pizza with ricotta and mozzarella. I don’t think I had the white pizza before because their plain margarita is just that good. The pizza had lots of dollops of super creamy ricotta. As you can slightly see on the upskirt, the crust wasn’t charred that much. It was a nice change, but I’ll stick to my usual pizza order next time. 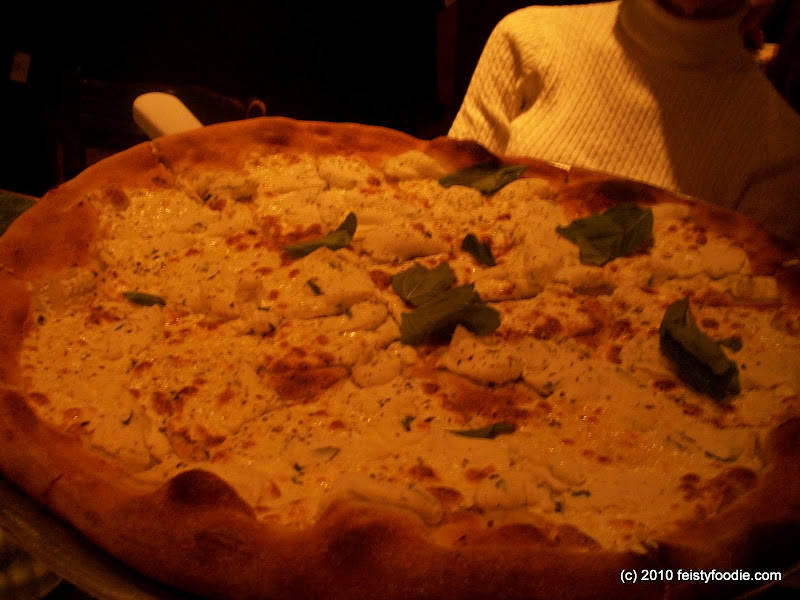 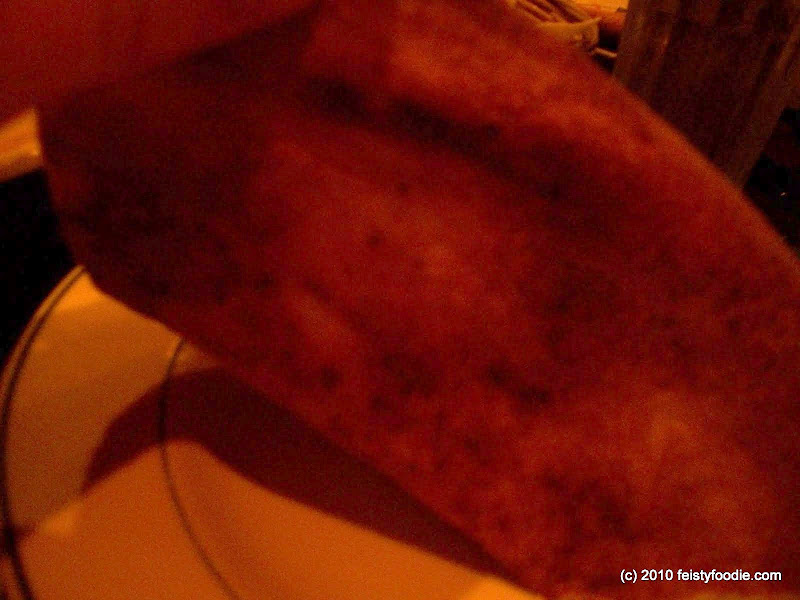 CT says: I agree. It was a solid white pizza, and the ricotta was really creamy. But if it were just me, I would stick to the margarita pizza too.

We also ordered an individual portion of Penne Alla Vodka with tomato sauce, a touch of cream, pancetta, and vodka. This was a good representation of the dish. Not remarkable but the sauce was tasty and the pasta was cooked well. I didn’t get that much pancetta flavor, but I got over it quickly. We would have been hungry if we had only ordered the pizza as a main, so I am glad we got this too. 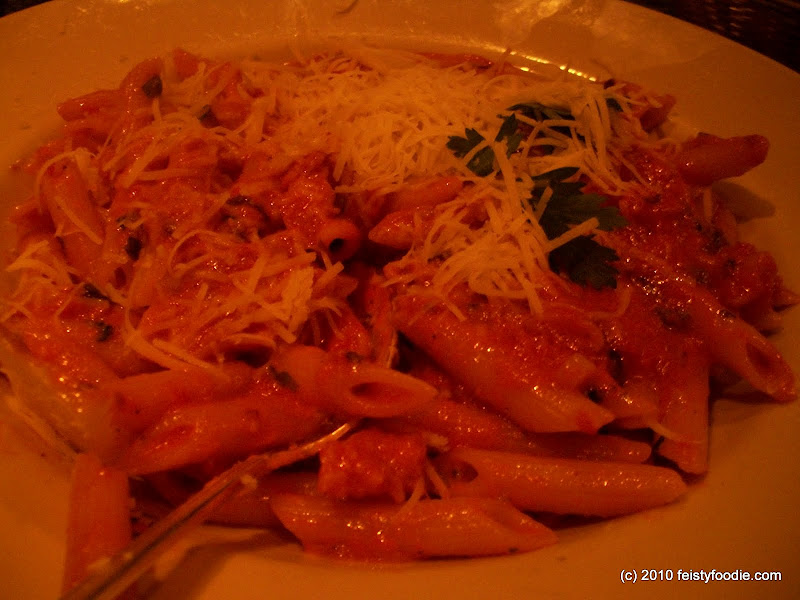 CT says: I liked this dish more than I expected. Not to say, I didn’t think I would like it, but I ate a lot more than I planned to given that I don’t usually order cream-sauces. It wasn’t very heavy and the pasta was cooked well. It was a good combination with the white pizza, too.

Although we were all happily full, we ordered a piece of Chocolate Mousse Cake for dessert. I had my usual one bite and liked it. It looked like it was made off-premises, but that’s ok since you don’t go to Patsy’s for the dessert. 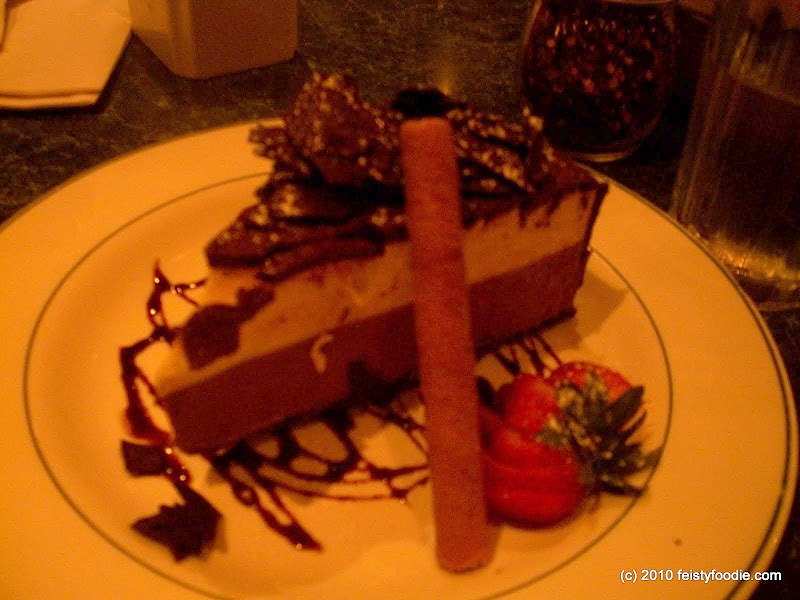 CT says: Good dessert. Nothing mind-blowing, but satisfied the sweet-tooth and a nice ending to the meal. I would recommend it if you want a little something light.

All in all, it was a great choice for a casual Sunday night dinner. Patsy’s is a chain with six locations around the city and is different from the original location in Harlem. I think they all used to be owned by the same people, but then split off. Although it is a chain, they make a great wood-fired pizza with fresh mozzarella, basil, and sauce. Yvo went to the Greenwich Village location last winter, check out her review. Less is definitely more when it comes to their pizza. I would definitely recommend you stop in and try for yourself.