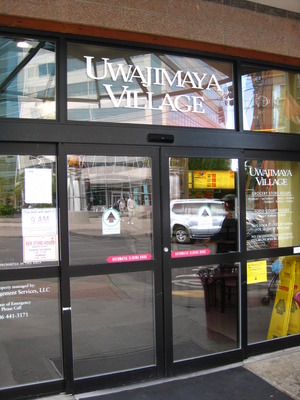 During my casual research of what to eat at Safeco Park, I came across a number of comments that said “we don’t eat at the park, but on the way there, we stop at Uwajimaya Village and pick up banh mi.”  For about $3.  Hello?!  I’m there. 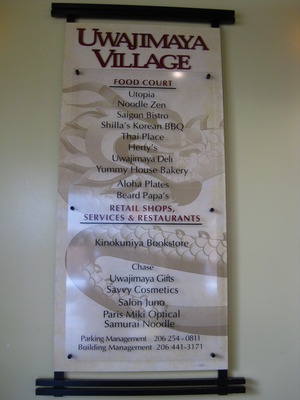 Unfortunately – I seem to have had a timing issue while in Seattle, huh? – the first night I went there around 9pm, and the food court was already closed. 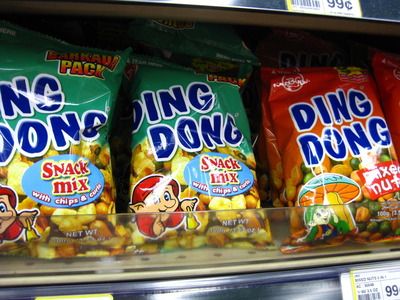 So I contented myself wandering around the supermarket – I LOVE BIG SUPERMARKETS and just wandering around them! – and picked up some pre-made food to nosh on back in my hotel room while watching a random movie on TV.  The above photo is for the BlindBaker, or as I call her, ding dong.  ;P 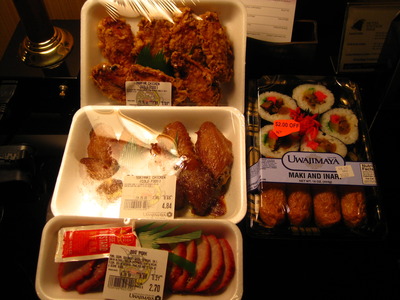 I’d picked up quite an assortment – four packages total.  (I like to munch while I watch TV.  Bad habit.) 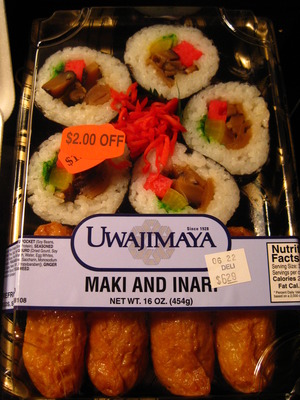 Futomaki and inari – sushi rolls filled with shiitake mushroom, burdock root, pickled radish, … it changes depending where you get it.  Inari is fried tofu skin that’s then preserved in vinegar and stuffed with sushi rice, I love these things, when done right, they’re soft pillows of sweet tofu filled with yummy rice.  This was $2 off because it was so close to closing time; they had other sushi offerings with a similar deal but I couldn’t bring myself to buy fish that’d been sitting out all day, so I went with a non-fish option.  Both were sufficiently yummy. 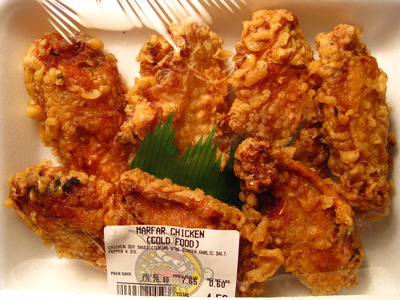 Fried chicken wings!  I don’t know what marfar is, but I feel like I’ve heard that before… 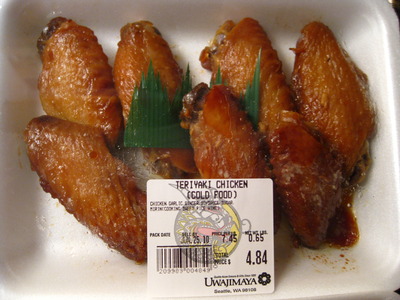 Teriyaki chicken wings.  Of the two, I definitely enjoyed the marfar better – slightly crisp, with a very tasty outer coating.  The teriyaki were bad cold, and sticky/drippy, and tasted like plain soy sauce with maybe a shot of ginger/sugar, but not enough to qualify it as teriyaki.  I’ll pass on these next time! 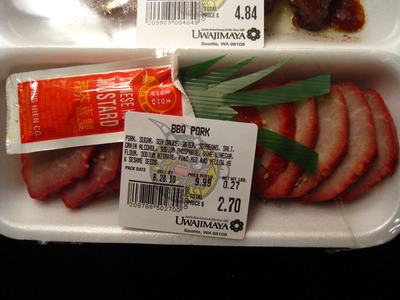 Last was a package of BBQ pork, or roast pork.  Looks like ‘char siu’ – Chinese style roasted/BBQ pork.  I picked this up because I was feeling a bit homesick and missed my mom – she makes really good char siu – and I was missing home a little bit.  I don’t think I’ve been away from New York for that long since I went to school upstate for a year (and I visited frequently at the time).  Not bad, but a little dry – but what do you expect from a package that’d been sitting out all day?

I think I’d have liked these items more if I took them to a home where I could heat them or mix them with rice I’d made myself, or something.  Not bad at all – for around $15, great night of snacking for me. 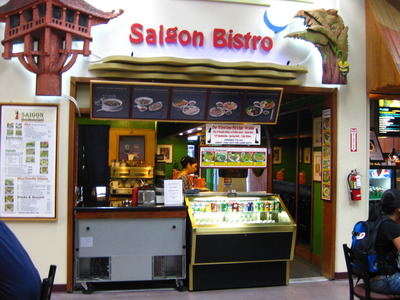 I’d learned my lesson the night before and headed over a bit early the next day before I had to catch my flight.  I wanted banh mi, dammit.  I quickly found the place in the food court that offered it. 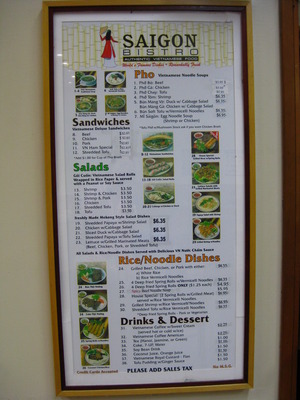 And then a funny thing happened… after I snapped this photo (can you see that?  Sandwiches are offered at $2.85 a piece.  BANH MI FOR LESS THAN $3 PEOPLE), a security guard I’d barely paid attention to (afterall, I wasn’t planning on doing anything nefarious) made a beeline towards me.

“Miss, I’m going to need to see your camera.”
*thinking… no… no you don’t* “I’m sorry?”
“Miss, I need you to delete that picture from your camera.”
“Ummm… what?”
“We don’t allow photography in here, as it’s a one of a kind place.  We don’t want people copying the idea.”
*not following* “Ummm… okay…” *turns on camera; presses a few buttons; turns it off*  “Okay.  Sorry about that.”

I don’t think I really capture the essence of what happened here, but he was pretty aggressive about doing his job.  (I don’t think he really knew how to work my camera, or he’d probably have made me hand it over.)  I feel justified in not deleting the picture because the reasoning behind it makes no sense: no, you are not one of a kind; heard of Mitsuwa? and beyond that, really?  Photographs might help copy an idea, but really, I could easily just sit down and start writing down everything I saw, which would probably be even more helpful in copying the idea.

Normally I don’t condone breaking rules on my site, but certain rules like this one just don’t make sense, and when approached the way I was – he acted like I was a terrorist! – I have to do my own thing and do what I think is right. 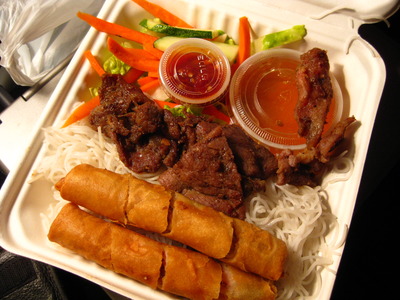 Ahhh, even so.  Maybe this was me being punished for breaking the rules.  I ordered a sandwich.  “No sandwiches yet; we don’t have any bread.”  Apparently their bread gets brought in every morning.  This went on for a good 20-30 minutes; I would wait 5-10 minutes (as she told me it would only be 5-10 minutes before the bread arrived), go back and try to order, and again be told the bread wasn’t there yet.  I know it was kind of early – 10 am – but I figure that was the closest to breakfast-like item on the menu, right?  Finally, I had no choice – the walk back to the hotel, then cab to the airport – I had to leave.  So I ordered the house special bun – vermicelli with grilled meat and two spring rolls, which I thought was a bit pricey at $6.95.  It was OKAY.  Not amazing by any means, and I really, really wished I’d waited another 15 minutes (and yes, risked missing my flight further) to get a banh mi.

Yvo says: Definitely set aside an hour or two to check out Uwajimaya Village if you hit up Seattle – it’s interesting enough to warrant at least one walkaround, and the food court seemed interesting.  There was a Korean restaurant that looked good – discount if you have tickets to that day’s Mariners game (and is open late/after the game, too!) – and then a weird Chinese food buffet.  Some hits and some misses, I’d bet.  And be stealthy with your photo taking…
recommended

Yep, this is the last post on my California/Seattle trip… bittersweet. But the Stadium Eats posts start on Monday – what I ate at each of the stadiums!!! 🙂