Directly following my trip to Peru, I left on a research trip to the West Coast for two weeks.  What was I researching?  Glad you asked: a book on Stadium Eats!  Um, yeah, without a book deal in sight currently (hint, hint, anyone reading this who is interested!), I went to preemptively scout out the 6 West Coast stadiums and eat my way up and down the West Coast at the same time, starting in San Francisco, working my way down to Los Angeles, then San Diego, back up to San Francisco and then to Seattle!  Phew!  Tune in at 4:15 EST (or 1:15 PST, lunchtime on the West Coast) for the next 6 weeks to see what I ate and where I ate it… and how I gained 10 lbs in two weeks! 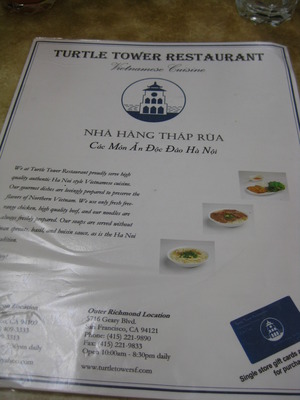 After landing and dropping my stuff off at the hotel, I went straight to Turtle Tower.  Luckily, it was pretty close (maybe that’s why I picked it?); I’d been craving Ha Noi style pho since my last visit to San Francisco, and was eager to dive straight into my eating.  I’d had terrible food (um, really a snack box) on the plane and was ready to eat real food again – it felt like ages.  (Did I mention that my 9am flight had been cancelled, apropos of nothing, and I’d been switched into the 7:30am flight?  So after a night of very little sleep trying to cram 2 weeks’ worth of clothing into a carryon bag, I suddenly found myself needing to leave very early to make my flight, much earlier than I’d thought I’d need to.  Not cool!) 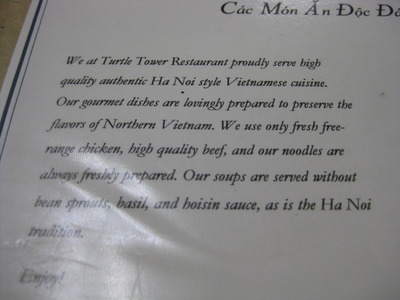 The menu seems to have changed slightly since my last visit; cleaner copies, and the prices ever so slightly higher than before.  Not a huge deal – at most 50c difference – but it was something I noticed.  The location of the explanation of its style of pho now is on the front of the menu, instead of above the pho section inside. 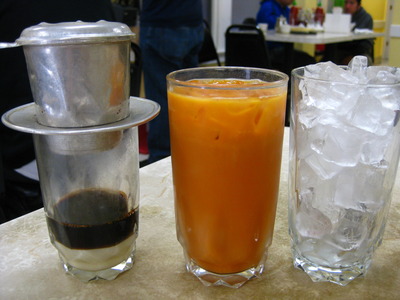 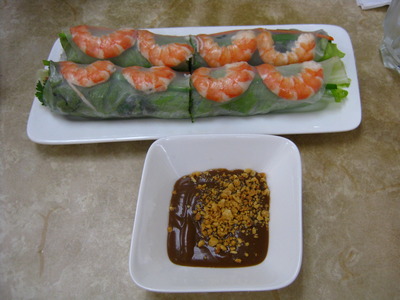 I hadn’t ordered this last time, but I really love summer rolls.  They’re so refreshing and light, lovely on a hot summer day.  These were longer than I’m used to receiving – usually the ones I get at my favorite place are thicker but shorter. containing only three shrimp (halves). 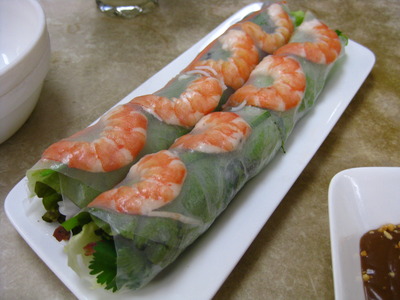 These boasted a lot more greenery, slightly less noodles, and dipped into the thick peanut sauce were super tasty. 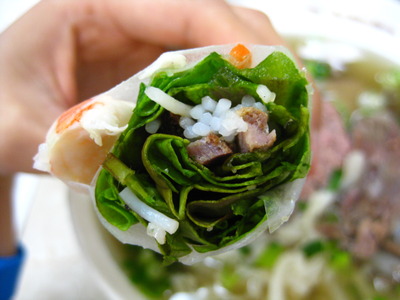 Bits of pork inserted into the rolls rounded out the flavor nicely with a little bit of meatiness. 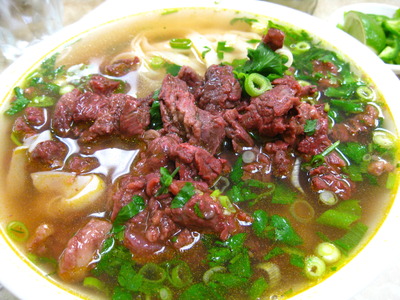 Okay, this was the first of many “weird” things I did on the trip.  When I was served, they also served the woman sitting (also alone) to my right the above dish.  I was so curious because it seemed much redder than I’m used to seeing (yes, even redder than the red-cooked beef I sometimes order on my bun; the picture above doesn’t really do it justice), and it looked so interesting, I asked her if I could take a picture of her bowl.  She obliged and then asked me if I was a Yelp’er.  I recoiled in horror involuntarily, which unfortunately ended all further conversation; I would have asked her for some food recommendations but she seemed a little annoyed by my visceral reaction to being called a Yelp’er, and I was afraid she’d direct me to Yelp or worse, lead me astray for food, wasting an opportunity of mine to eat well.  In any case, the above was a red wine cooked beef pho, which she ate with much gusto, leading me to believe it was tasty.  Or she knows nothing about food – hey, she Yelps, so that seems likely…  ;P 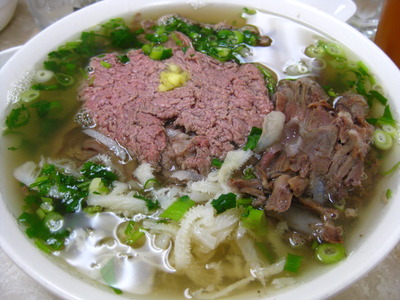 Though I’d stuck with simple pho tai my last time out, I actually usually order pho tai nam gan sach (I think that’s the name?).  It’s basically pho (a deeply flavored broth with rice noodles in it) plus eye of round (usually sliced, though here appears to be chopped), omosa (a part of the intestines), beef brisket, flank and tendon.  The tendon was a bit too chewy/fatty for me to eat, but the rest of it was, as expected, delicious.  (Though the beef looks a bit raw, you push it down into the super boiling hot broth and it cooks very quickly and briefly from the broth being so hot.)  Again, this was served simply with a dish of sliced jalapenos and a wedge of lime on the side, which was mostly ignored by me but the lime – I love the brightness a splash of acidity can add to a dish like this.  The noodles, once again, were very smooth and slippery, flipping around as I lifted them to my mouth with my FAIL chopsticks “skills” and tried to eat them without splashing broth all over me.  The broth itself is very ‘clean’ tasting, not murky, and while it boasts a sweetness to it that the regular pho to which I’m accustomed on the East Coast just doesn’t have, you really do have to know going in that you’re getting this style of pho.  Very tasty, and very comforting after a crappy flight over from the East Coast, and super filling – I was so stuffed by the time I finished everything, I actually wound up going back to the hotel and falling asleep for very many hours.  Which means yes, I did not eat dinner that first night, oops. 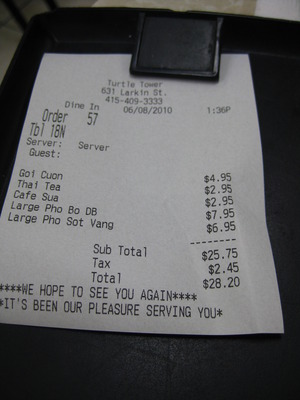 Strangely enough, when my bill came, the woman’s pho was also on my bill.  Of course they took it off when I explained the mistake, but it was still a little odd that it suddenly appeared on my bill.  I could certainly have gotten away with only ordering the pho and nothing else, making my total bill less than $10, but I was really thirsty and I wanted summer rolls.  Hey, this kicked off two weeks of eating out!  I said this is how I gained 10 lbs. in two weeks!  😛

Yvo says: I really enjoy the cleaner taste of this style of broth, but I wouldn’t want it all the time.  The other style of pho has its place in my heart too!  I just wish this was much, much closer to home, so I could routinely eat both and have my pick…
recommended