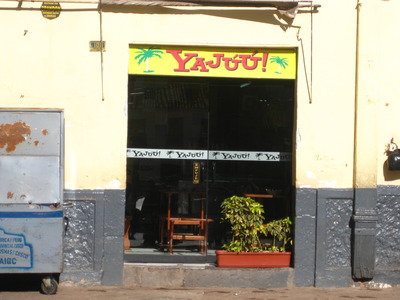 Our first day walking around Cusco had led us past this storefront, which amused us so much we took a picture of it.  During our bus ride from the train back to Cusco, we overheard these annoying and giggly girls (that we then kept running into… ick) saying how awesome and cheap this place was for fruit shakes/smoothies, and how the drinks were so huge the three of them had to share one… so after saying goodbye to the guys, who had an earlier flight than we did, we decided to walk over and get a drink. 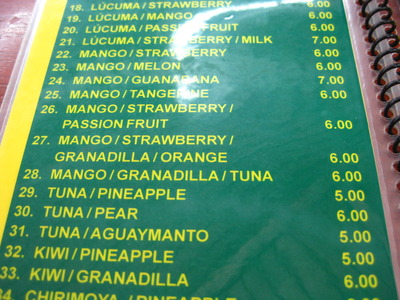 I had to take this picture of the menu because… well, look at 29, 30 and 31.  Tuna in your drink?  Really?  I was tempted to ask questions, but the place was clearly filled with locals and my Spanish simply isn’t good enough to ask “What do you mean, there’s tuna in this drink?”  The prices weren’t bad – a little over $2.  Despite hearing the girls say the drinks were huge, looking around at other people’s drinks, they didn’t seem so large, so we opted to each get one. 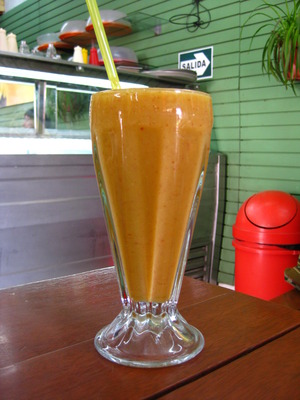 HB went with mango/strawberry and really enjoyed her drink.  She noted that she tasted way more strawberry than mango, however, which is neither a good nor bad thing, just what it is. 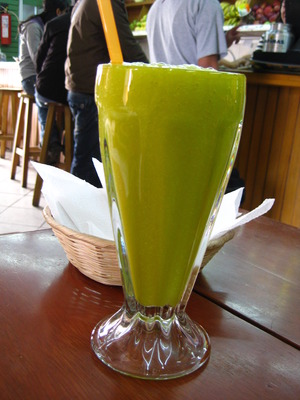 I went with mango/melon, wondering what kind of melon and was rewarded with honeydew, one of my favorites.  The melon flavor shone through, while mango seemed to act more as just a thickener.  And yes, HB and I both finished our respective drinks, before wandering off to get lunch.  These were not HUGE – they weren’t small, but the giggly girls were clearly anorexic or stupid.  🙂 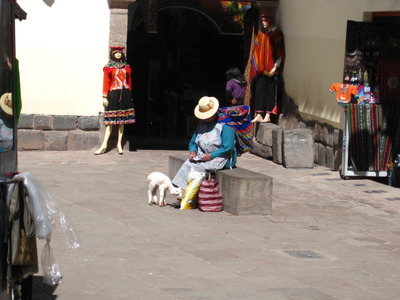 And on our way to get lunch before our flight, we saw this teeny tiny lamb in a square.  So I ninja-photo’d it because I was still mad that a woman in similar traditional garb ripped BF and I off for a photo of him with an alpaca our first day there (I didn’t even want to take a picture with it, but he wanted it, and … long story short, she kept telling us we didn’t give her enough until I said flatly “no mas!” and stomped off.)  (Not to say that all of them were alike, just because one ripped us off doesn’t mean they all will, but rather, I just didn’t want to deal with the hassle.)

Nommy!  There are a few locations of Yajuu around Cusco, and I recommend seeking one out for deliciously fresh juices if you like that sort of thing.  Inexpensive and quite tasty, they also had a few desserts that looked super yum (a HUGE bowl of fruit, yogurt, and honey, for example)… but we were on our way to lunch, so I had to opt out.  🙂