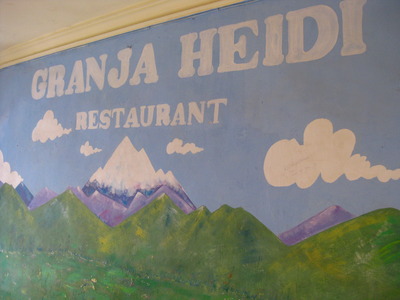 After we’d settled into our rooms, HBBF took a peek through the guidebook and chose Granja Heidi, which we’d heard about from StB’s trip last year and the guidebook said was excellent German food. 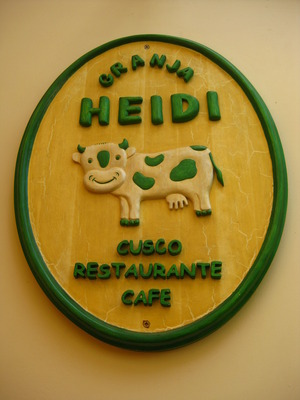 Granja Heidi certainly was owned by a German man, who came over to talk to us briefly when we were deciding what to eat. 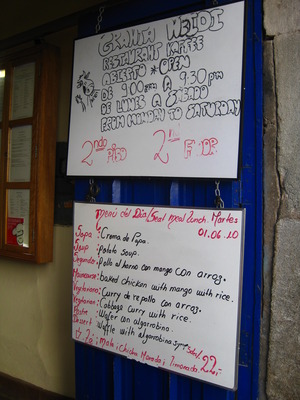 HBBF wanted the menu of the day, a set menu that included soup, a main course and dessert all for 22 sols (about $7-8USD).  Unfortunately, the main course he wanted, baked chicken with mango, was out for the day, so the man told us.  Then he said he found two portions, but they were reserved.  Then he told us he found one portion and we could have it but we’d have to fight it out.  I’d already found something on the menu I wanted to eat, so I had no desire to fight with HBBF (much more time for that later!) for our first meal. 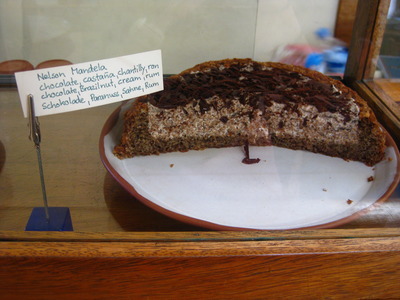 Though we didn’t partake, I saw this on the way in and thought the name was funny.  It does look tasty though, doesn’t it? 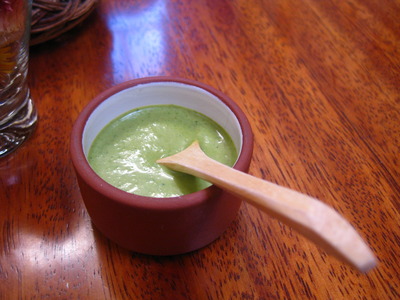 Some of that Peruvian green sauce everyone raves about at Pio Pio.  This was pretty spicy. 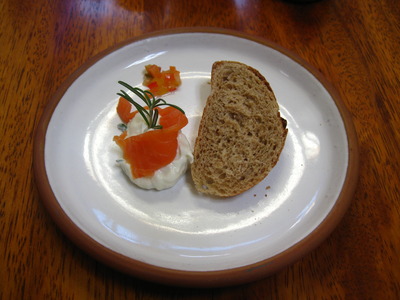 Our amuse bouche – whole grain bread with a dollop of what tasted like creme fraiche to me, smoked salmon, a little bit of tangy pico.  There were scallions mixed into the creme fraiche – maybe it was room temp cream cheese! – and this was pretty tasty. 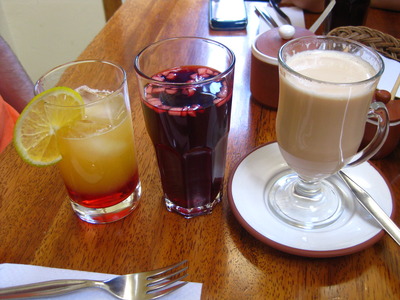 BF ordered a screwdriver/vodka-orange juice, which came with a bright splash of what he said was blood orange juice in the bottom of the glass.  He really liked his drink.  HB & BF ordered chichamoradas (I only took one glass for the photo), after HB described to her BF what we’d had in the Amazon, and he thought he’d like it.  Looks like sangria, right?  Bits of apple floated on top.  I ordered dulce de leche as a hot drink, which other places seemed to call ponche de leche, but I only had it here: sweet, sweet, creamy milk drink.  Yummm… I see this as being the perfect drink for a children’s breakfast.  Hahaha.  BF really liked it too, and tried to jack it from me, but I scowled and he kept his grubby paws on his own drink from then on (okay, and I gave him some more later, too). 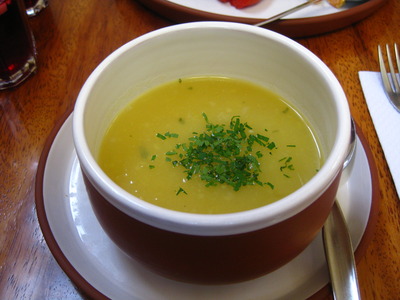 The potato soup that came with the menu of the day.  I didn’t ask how it was but it looks really simple and fresh again, a recurring theme in the food we’d had in the Amazon. 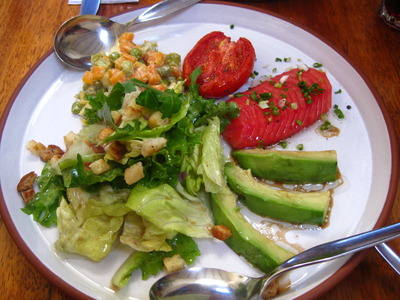 Since we hadn’t had much salad or greens in the Amazon, HB and I opted to split a large salad, which BF agreed to also have a bit.  Not quite as many greens as we’d hoped for, but still pretty tasty – a roasted tomato alongside peeled fresh tomatoes, avocado, lightly dressed greens, and some frozen veggies that had been cooked or thawed and tossed lightly with mayo.  Interesting combo but good nonetheless. 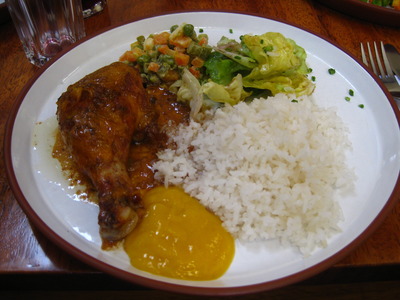 HBBF seemed happy with his dish and didn’t make much comment as he chowed down. 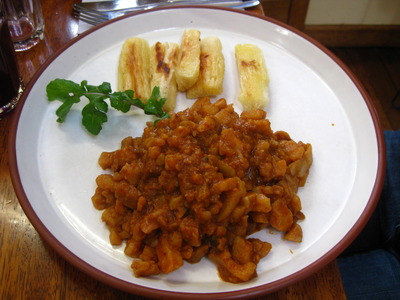 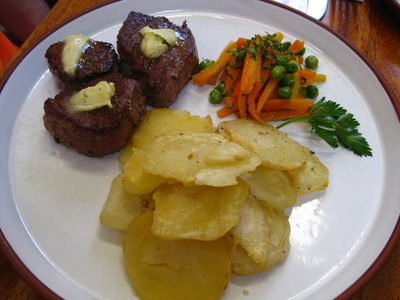 BF ordered beef medallions and was extraordinarily pleased with his dish; the meat was cooked perfectly medium rare and very tender.  I tried a bite and was pleased on his behalf; very tasty! 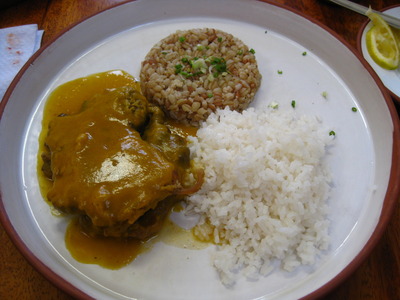 I opted for the osso bucco because why not?  When it came, I was a little disappointed, but when I pushed aside the sauce, I was pleased to see large sections of bone, just sliced thin, with the marrow still within.  I scooped out all the marrow and mixed it with my rice, making for a deliciously fragrant rice platter… nommy.  The meat bits were fine, though the sauce was a bit strange and out of place there.  BF likened it to… well, we shan’t say, because that isn’t for a food site, I almost punched him in the face for saying it… but my, this was yummy. 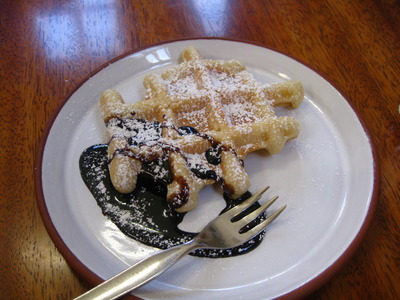 HBBF also received dessert as part of his menu of the day.  Crisp, chewy, delicious liege waffle, though the chocolate sauce had a little extra something in it – some spice – not cinnamon but perhaps nutmeg? – that we couldn’t identify but was certainly present and not entirely welcome.  Meh.  The waffle alone was much tastier without the sauce. 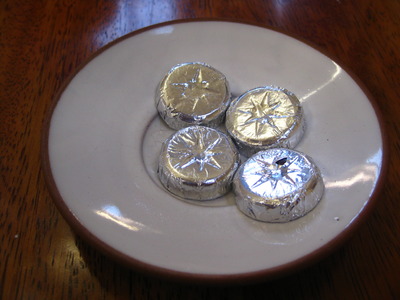 With our check, we received little chocolate coins, which were also very good.

Yvo says: I was happy with our first meal, though it cost about 160soles, a little on the high side (yes, this is the high side) for Peru.  We just didn’t know it yet.  I recommend this place for anyone who goes to Cusco and doesn’t really want to get to the down and dirty side of Peru for local cuisine… it was yummy, a beautiful space, brightly lit and very clean.  Perfect for the tourist who doesn’t want to mingle with the locals.  And down the block is Jack’s, which serves American food, also for tourists.
recommended but know what you are getting: the touristy, sanitized version of Peru here