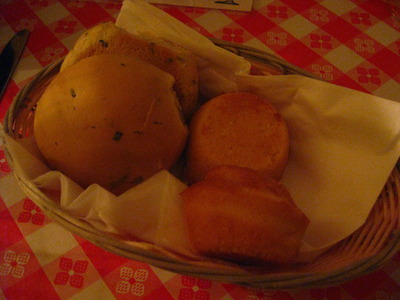 SpB and I met up around Austin Street recently and headed over to 5 Burro Cafe, but it was unfortunately super packed!  So we turned around and headed to MG’s, which was… really empty.  MG’s used to be Mardi Gras, which I’ve written about here and here.  Neither time was impressive nor horrifying (well, that 2nd time was borderline horrifying), and with the new name, I figured new management or at least a new menu…

The bread was the same as I’d remembered it, nothing spectacular but nice to munch on since I was really hungry. 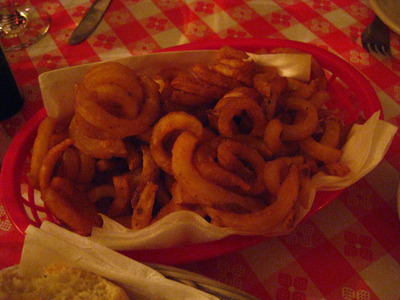 We started off with a basket of curly fries cuz SpB should be renamed FRIES Bear… these were nice and crispy, hot.  Yummy but how do you go wrong with curly fries? 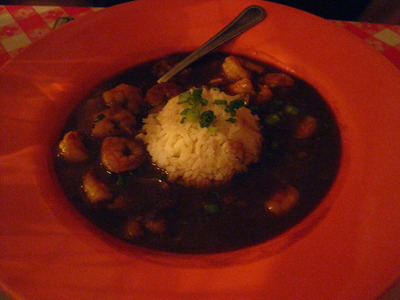 SpB ordered the etouffee, which she said was pretty good.  I didn’t try any but she seemed happy with it. 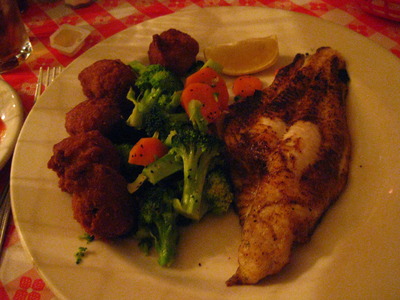 As for me, I was trying to find something interesting or semi-healthy but wound up with ‘blackened’ tilapia, veggies, and hush puppies.  The fish was fine enough, a bit dry but nothing a lil squirt of lemon didn’t take care of quite nicely.  But the fish wasn’t particularly flavorful or anything… BUT THE HUSH PUPPIES.  Oh my, the hush puppies… I’d never had real hush puppies before that I could recall, and these were just awesome.  Crisp ‘shell’, fluffy interior, slightly sweet – like the perfect donut bites that I get to eat with my meal, not wait till the end.  Oh my word!  Me like.

Yvo says: MG’s (formerly Mardi Gras) continues to be an overwhelmingly mediocre, but inoffensively so.  It certainly fulfills a need on Austin Street, to be slightly less than the same as everyone else, and as it wasn’t busy, we were seated immediately, which is a great bonus on busy nights when you just want to eat something quick before a movie or after, even.  It will continue to be on the back-up list; unless and until they improve their food, it won’t move up, but nor will it move off the list, either.
middle of the road – suits its purpose, but not amazingly so