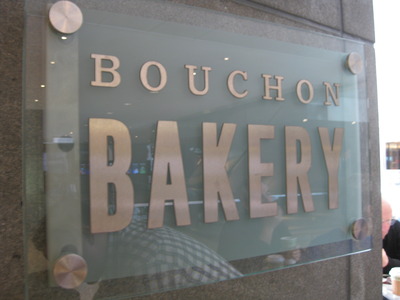 Maybe you’ve heard of this project going on called 93 Plates?  No?  Well, here’s a link explaining what it is 😉 Essentially, The Wandering Foodie has been eating his way around NYC – 3 meals a day, blogging about it, and inviting other food bloggers to join him.  I’m currently sitting next to him in Starbucks, blogging our breakfast (if you can call it that… you know I am a savory foods kind of gal when it comes to breakfast!), while he catches up in posts (it is NOT easy to blog concurrently with eating; that’s one of the reasons I tend to post about a month after I have eaten something). 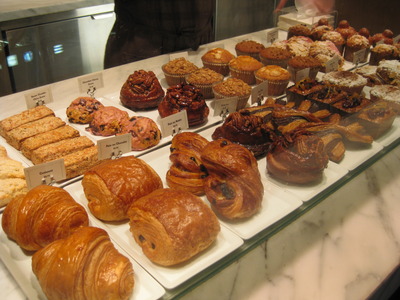 So this morning, I met up with Hagan at the Time Warner Center to check out Bouchon Bakery.  Look at all those treats!  I find myself really enjoying pictures of lots of treats, no matter what they are… 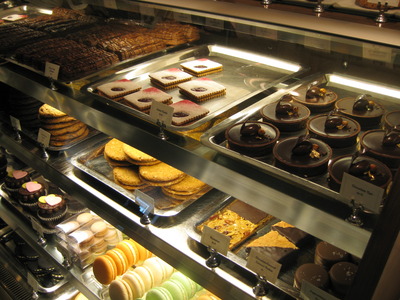 Here’s the other display case – doesn’t it look yummy? 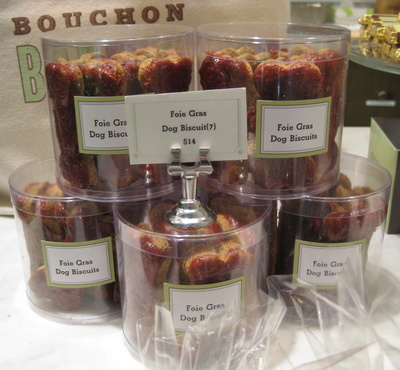 And then I saw these. 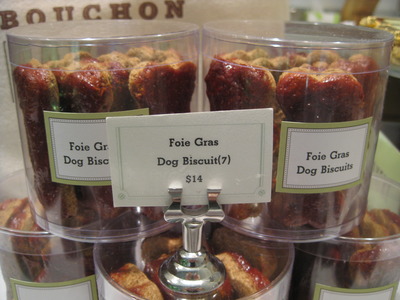 You can’t see it?  Here’s a closer up shot.  Yes, my friends: foie gras dog biscuits.  $2.50 each if you buy them individually; I wanted to buy one just to try it.  There isn’t anything in dog biscuits (the homemade kind) that people can’t/shouldn’t eat!  It’s usually just flour, water, some bacon fat … and flavorings, depending what you want to use (peanut butter?).  Anyway, I decided against eating a dog biscuit for breakfast; afterall, it was my first time meeting Hagan and I didn’t want him to think I was totally balls out off my rocker.  (I may go back later to get one though…) 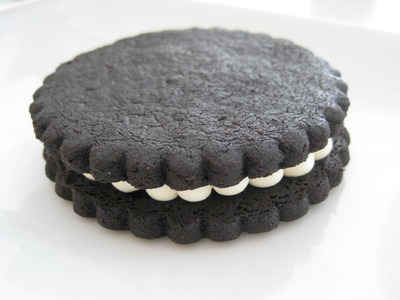 But enough pictures of stuff I didn’t eat.  How about this?  Some of you may recall that I went to Bouchon in Yountville, Napa Valley, a little over a year ago… and hated their TKO (Thomas Keller Oreo).  Well, when I told Hagan that – who apparently LOVES Oreos! – he said we had to get it to compare.  Now, my problem with the one in Napa Valley was that the cookie was hard/dry/too crumbly, and the cream was way too thick and sweet.  If you compare the photographs, this one definitely already looks like less cream.

The verdict?  This cookie was more tender, and the cream, while still sweet, was more thinly spread… which made it much more palatable than the Napa Valley one!  As for the cookie being more tender… it’s gotta be the NY water 😉 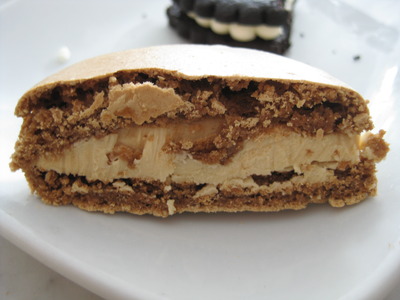 Unfortunately, despite our informal-food-photo-shoot that lasted a good 15 minutes, I somehow managed to not snap a photo of the caramel macaron before we cut it in half.  Durrr!  But a macaron is a macaron is a macaron – the way it looks, anyway! – and this one looked no different (except being a soft brown in color).  I have little to no experience eating macarons, so I will say: I was surprised by how crisp the exterior was, and delighted by the chewiness.  It was, in a word, delicious.  The caramel-cream-center was, well, creamy, and not too sweet.  What could make this macaron better?  -bear in mind, I have little experience with macarons.  But the addition of sea salt might bring it to this whole other level that would bring me back to Bouchon at TWC day after day, week after week… considering the rest of the macaron is pretty awesome already. 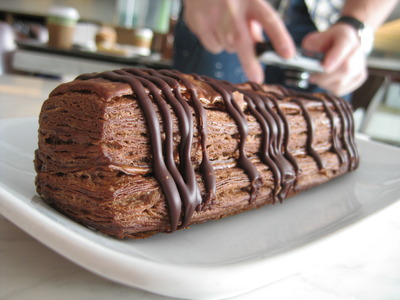 Pain au trois chocolat – just the name of it should send a shiver up your spine.  If you’re a chocolate lover, that is. 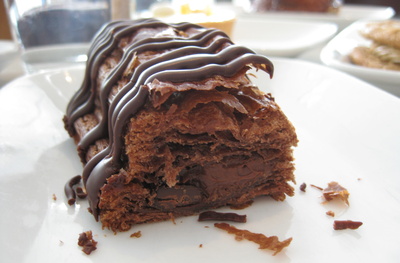 Yeah… take a look at that.  Flaky, chocolate drizzle across the top, and can you see the center?  No?  Well, I liked the angle of this shot, but it doesn’t show the innards too clearly… 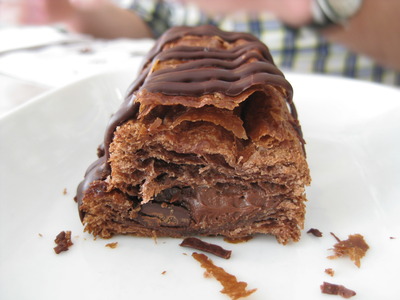 so here’s a better shot of the inside.  LOOK AT THAT CHOCOLATE OOZING OUT.  Is that not… almost… pornographic?  Just a little bit, yeah?

Unfortunately, I couldn’t eat more than a bite of this.  I was flagging quickly… and it was way too sweet for my tastes.  It was also super, super flaky, such that eating it was near impossible without getting some down my arm… on my lap… on the floor… on the table… everywhere.  However, if you love chocolate – the sweet kind – you HAVE to get this.  Ooshy chocolate, chocolate flakes of croissant, and a chocolate drizzle?  Yeah.  You do. 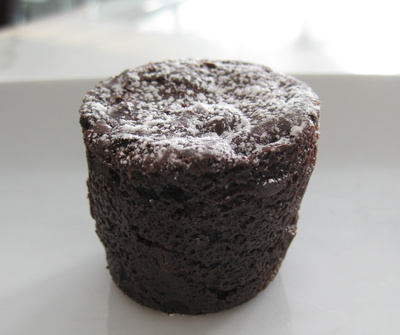 And here is the little chocolate bouchon.  Small in stature, big in taste.  No, seriously.  This lil brownie bites pack some serious chocolate in one dense bite: the first time I had them, a friend of my sister’s had made them for a party from the Bouchon cookbook.  They were just amazing – she made them slightly less sweet than these, which I preferred – but the texture – super dense, chocolate taking over your senses – for a non-chocolate lover, I sure sound like one, don’t I? – but that’s what these little bites do to you.  To me.  I highly recommend these as well. 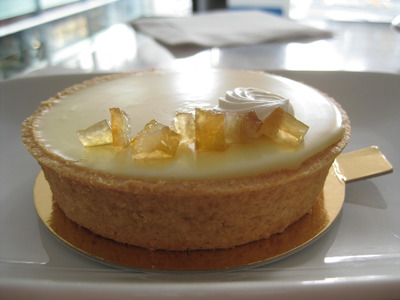 Lemon tart… the candied lemon (peel?) on top was a nice touch, and the lemon curd itself was nice and tart – a smidge of sugar, a great “palate cleanser” for between the other baked goodies we were enjoying. 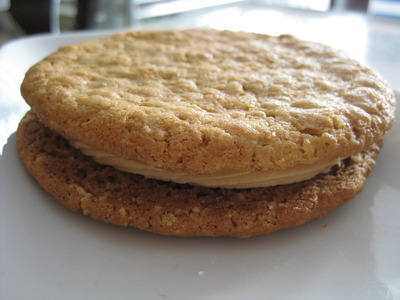 The Nutter Butter.  You have to really, really like peanuts for this to work.  The cookies were mixed with a lot of peanuts, which added a nice textural contrast to the cookie portion, and the creamy center was very creamy, very rich, and very peanut-y.  I’ve never had a real Nutter Butter, so I have no point of comparison, but Hagan said it was simply awesome.  As for my opinion?  Well, it turns out, I don’t like peanuts enough to like this… (and I like them fair enough!) 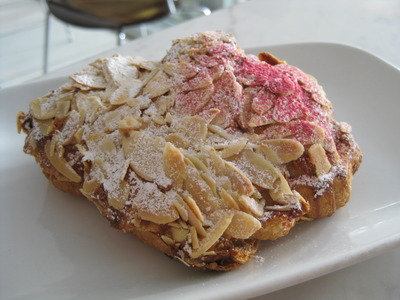 Raspberry almond croissant… just hearing the name, I wouldn’t order this, ever.  I’m not big on raspberries. 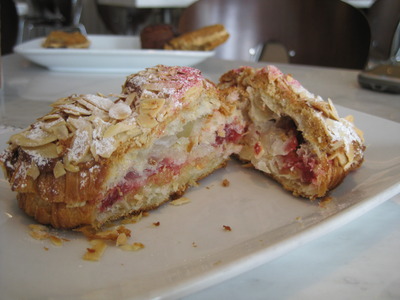 Cross-section.  Wow.  So, this item was not that sweet and was a total surprise.  You’d think a croissant would be flaky and soft, but biting into it, the raspberry almond croissant was super crunchy on the outside, then the inside yielded to reveal a nice, slightly tart raspberry mixture.  It was actually pretty amazing… I would say my favorite item of the morning (maybe the caramel macaron?).  All the right textures, not too sweet, just a perfect harmony. 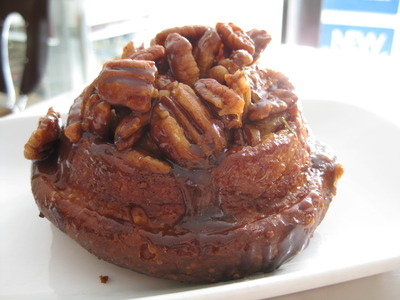 Pecan sticky bun.  Pretty banging, but I think serving it cold did a disservice to the levels it could have been brought to.  The inside was moist, and the crunchy pecans were very nicely-flavored… but overall, I’m not a sticky bun kind of girl.  Sorry… 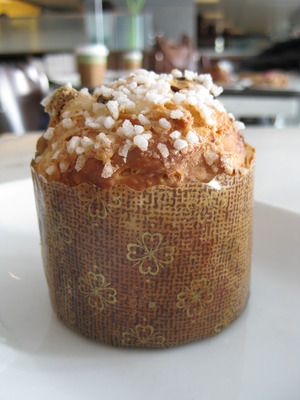 Pistachio cherry brioche? let me just say briefly, this was the last thing we sampled and neither of us responded enthusiastically to it.  Perhaps because it was the end of the breakfast, or perhaps because it simply wasn’t that good.  I’d pass on this one… though it was nice to have something not quite so sweet to end the parade of treats… 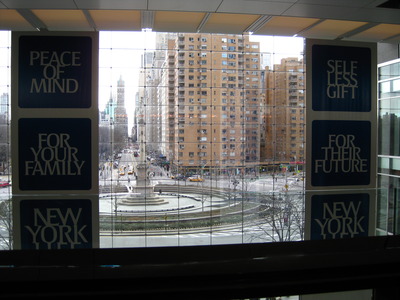 And this is the view from where we were sitting – straight out over Columbus Circle along Central Park South… a beautiful view, to be sure, and great light for an early morning breakfast.

Yvo says: Having eaten, in the space of about two hours or less, a large selection from the menu, I think I can safely say that there are many yummy items to be had at Bouchon Bakery.  While I can’t attest to the prices (the meal was comped by Bouchon for 93plates), I can’t imagine they are more than $5 an item in general, and they were made with high quality ingredients.  If I were in the neighborhood, I totally could see stopping by for a quick bite, a snack, a sweet treat…
recommended