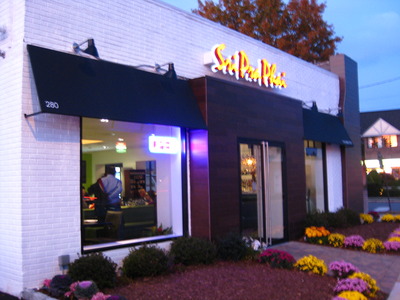 You know how much I like Sripraphai, so when I heard they opened up a Long Island location, and close-ish to where my sister lives, I had to check it out.  She took me there for my birthday actually, which was fun because I honestly can’t remember the last time we had a meal together, just the two of us – we usually roll with the fams, y’know?  🙂  (And yes, that means this meal was in October sometime…) 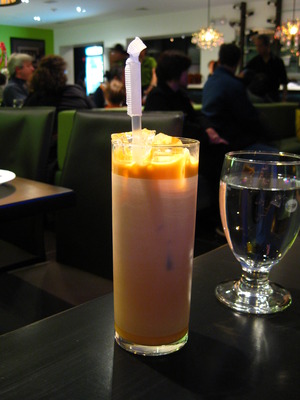 I started off with a Thai iced tea, which, to my surprise, my sister never had before.  It was pretty standard (ie, yummy!), and she liked it enough as well. 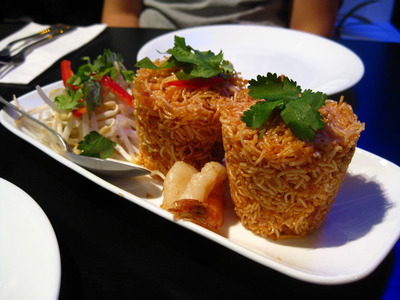 Since I’d so loved this last time, I chose to start with mee krob, the noodle-candy-nests topped with shrimp.  Delicious!  My sister really liked this as well.  And I did wind up buying a box of just the noodles to take home (you can buy just the noodles in clear plastic boxes near the register for $4 and change), and stuck it in salads, ate it plain, put it everywhere and it was so good, not nearly as sticky as the kind they serve you, which is fine.  (I dislike sticky things.) 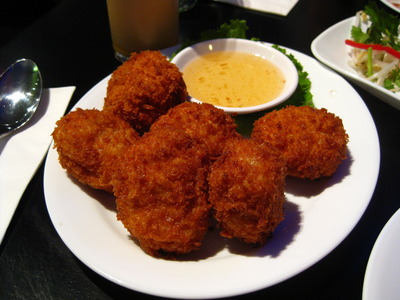 I also really wanted shrimp cakes, so we had these.  My sister said they were good but reminded her of a Chinese dim sum she’s not that into – but I can’t even wrap my head around that.  I mean, freshly ground up shrimp mixed with spices/seasonings, then lightly breaded (panko crumbs?) and deep fried, hello?  It’s just so fresh and bouncy and delicious… especially with the sweet dipping sauce.  YUM. 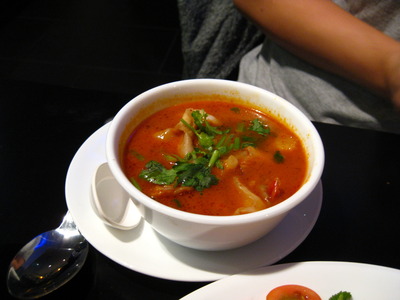 FeistySis also ordered tom yum goong or whatever it’scalled (it wasn’t exactly that on the menu).  I tried some and was surprised to really like it – I’ve never had it, actually – but I loved the medley of flavors going on, all working to create a happy harmony of sour, slightly spicy, and just overall delicious. 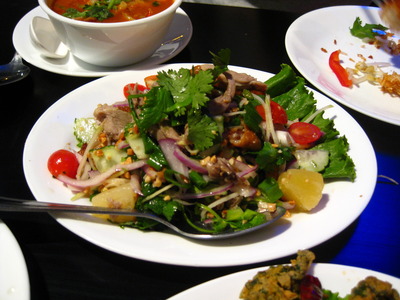 I wanted to try something new, so we ordered the roasted duck salad, which was good, but nothing unique.  Eh.  I like the duck salad from Thai Pot better, though I can’t remember what’s in it, and it’s definitely more expensive than Sripraphai’s. 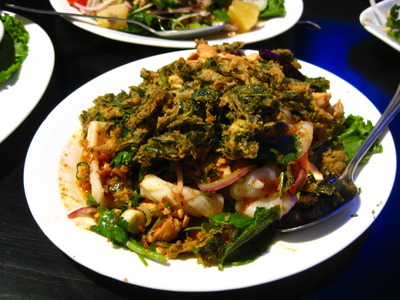 We also ordered the crispy watercress salad, which was, per usual, lovely and delicious.  Crispy deepfried greens… what’s not to love? 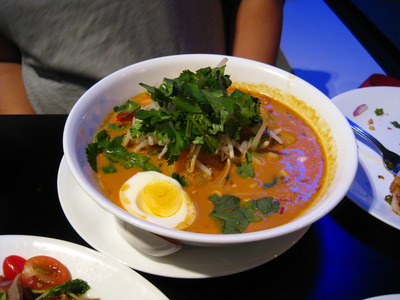 FeistySis opted for a curry noodle dish, which she made me try a teensy sip, despite my protestations that I am allergic to coconut – which was in this dish – so I should not have some.  It was very fragrant and very coconutty.  That’s all I can say about it, really, except that she really liked it. 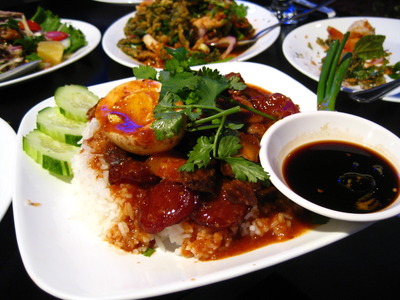 Last but not least, my decision to get something ‘different’ led me to the house special pork chop… which was slightly too sweet for me, and not all that interesting beyond its mostly-cooked-boiled egg.  Don’t get me wrong – it was perfectly tasty – but basically a pork chop fried and then chopped up over rice, doused in a sweet sauce.  With what looked like pork Chinese sausage spread throughout as well.  Meh.  I think I’ll stick to the noodle dishes I like next time.

Yvo says: FeistySis was extremely happy with the meal overall – and yes, that was all for just two people, but we both took home leftovers and enjoyed them over the course of a few days (maybe less for her, since she has way more people in her house than I do) – I was also extremely pleased with the meal.  Despite this being their second location, I found the quality remained the same between the two locations (or close enough that I couldn’t tell any big difference).  Yum!  I am definitely thrilled to have a location super close to my sister, and I know she is as well – she even said she’ll take our mom there…
recommended