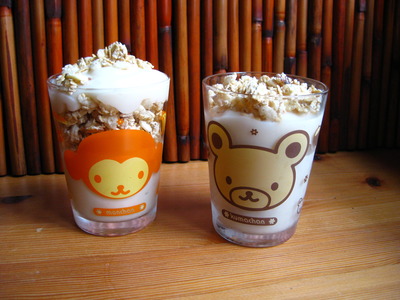 I walked over and saw stacks of boxes: chocolate & vanilla instant puddings.  Hmmm.  I’m not one much for pudding, but it looked interesting, and I had this vague image of making something interesting and dessert-like for BF.  I’m a nice girlfriend, what can I say?  So I picked up one of each… the directions looked simple enough, basically just whisk together the packet contents and 2 cups of cold milk.

I made it into a big bowl, and then decided to mix it with granola.  Trader Joe’s granola with almonds, as it turns out, because that’s what I had. 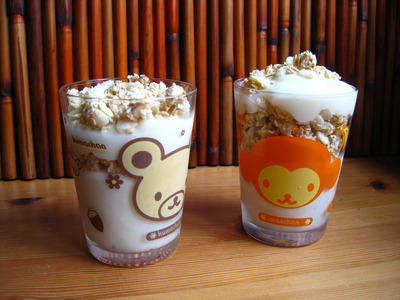 Seeing as I’ve never made parfait or any similar layered item before, I kind of messed up – the bear cup on the left – by putting too thin a layer to really see it through the cup.  I learned my lesson a bit too late for the 2nd cup – the monkey on the right – but close enough.

First, about the cups.  It’s really supposed to be a rabbit on the left, but Ichiban Kan (back when they still had an online store) sold out of the rabbit cups, so I bought a bear (to represent me) in the interim.  They never restocked on the rabbit cups, so I never got one… next trip to San Francisco (in a week! squee!), I will have to rectify this.  The monkey represents BF.  It’s a long story why MY Eastern Zodiac sign (Monkey) represents him and bunny, which is neither of our signs, represents me… but whatever!  Aren’t the cups cute?  🙂

Now, for the pudding!  I don’t have a lot of experience with pudding, so I have no real comparison or expertise in the area.  It wasn’t too sweet, and the texture was alright.  Smooth, slightly creamy (I used full-fat milk, since I had milk leftover from making baked mac&cheese), and airy.  The granola – which is a relatively new item in my household and vocabulary – is lightly sweet with a good crunch, not enough almonds for my tastes, but a box is not expensive – probably because there aren’t THAT many almonds – I can easily just add my own, and add smoked ones even better mmm.

The pudding with the granola was tasty – some nice crunch for textural contrast, based on color and what I mixed with it, I could almost pretend it was actually yogurt and I was being healthy.  The pudding by itself… did not sit well with me.  I don’t think I’ve ever had vanilla pudding – and I’ve never eaten rice pudding because the idea bothers me (sorry!) – and something about the color, the texture, and taste didn’t do it for me.  Maybe it’ll do it for you…

Yvo says: I probably wouldn’t buy this again.  That may not be the fault of the pudding – at $1 and change for a box, it wasn’t expensive, but it just wasn’t my type of tasty.  Well, I’m not even much for dessert, but every once in a while, you just want to curl up on the couch with something and watch a DVD… this isn’t for me.  I think it would be good for use as a component in a layered dessert as opposed to just eaten straight.
middle of the road… if you like vanilla pudding, I’m sure this is suitable
(It was really easy to make without lumps, though the vanilla flavor wasn’t pronounced, it wasn’t too sweet, either.)