I first heard of Yorganic when it first opened a few blocks from my office a while ago, but every time I’d walked in, I’d been dissuaded from trying it just because I would decide I was too full. 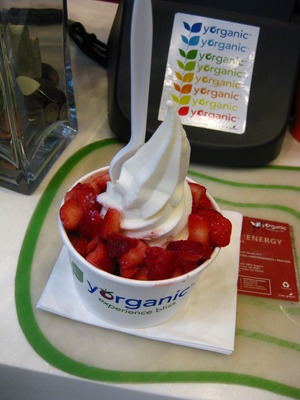 As luck would have it, a short while ago on a gorgeous October afternoon, I took a walk with a coworker, and decided I wanted something sweet to reward us for the brisk walk.  I pondered what was nearby and finally lighted on Yorganic; it was perfect because froyo feels healthy, and if Yorganic was anything like its competitors Pinkberry, Red Mango, etc. – it should have that slight tang that I like in Greek yogurt so much. 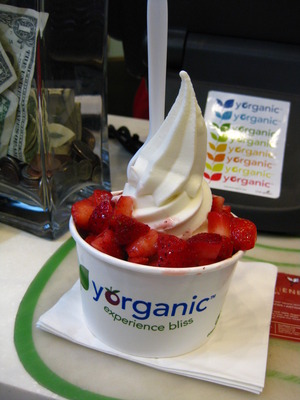 My coworker opted to get the same as me and we were both super full after eating small regulars topped with organic strawberries.  I think she had a little sticker shock when the cashier said, “$4.55 please” but that’s about how much all the fancy-schmancy froyo places are, I think.  (To be honest, though I’ve had both Pinkberry and Red Mango more than a few times each, I’ve actually never paid for it myself, because I’m usually with friends who REALLY want it but don’t want a whole one, so they “force” me to share it with them, and insist on paying.  I think they just want me to eat the calories >:T hahaha.)

The verdict?  Yorganic satisfies the craving for a lil something sweet while still feeling healthy, though I would probably share this with someone next time.  The strawberries weren’t too raw/underripe/tart, and went well with the regular flavored yogurt.  I enjoyed my cup very much… Would I get it again?

The answer is, if I’m at work and craving froyo, then yes, I would definitely go get it again.  HOWEVER… while I think it’s better than Pinkberry (which I don’t like), it isn’t better than Red Mango (which I love), and unless you work in the area, this is NOT destination froyo, ie, don’t go out of your way to get this.  If they open up more locations around the city, then you would do well to try it, as it’s quite yummy.

Yvo says: Good frozen yogurt and I like that they have a whole section of organic toppings, even organic crunchy cereals.  It’s a great addition to the area since we lack ice cream shoppes and don’t have any other frozen yogurt places (to my knowledge) in the immediate area.  They also have a fairly large selection of food – soups, possibly sandwiches, such that you could eat your whole lunch there.  I might go back to try other stuff.
recommended