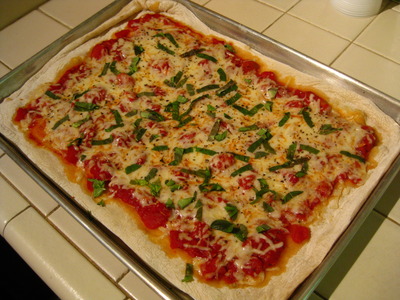 Yes my friends… I made pizza.

Sort of.  I bought Trader Joe’s pizza dough.  At 99c a ball… well, how do you say no to that?  And it turns out that rolling out the dough isn’t that hard (when you have the right equipment – I bought a French rolling pin a while back, so I do), I managed to get it pretty darn thin.  Except my surface wasn’t exactly the best for this so one edge refused to roll out thinly (you can kinda see it, top left in the pic), so I wound up just folding that edge over a little bit, haha. 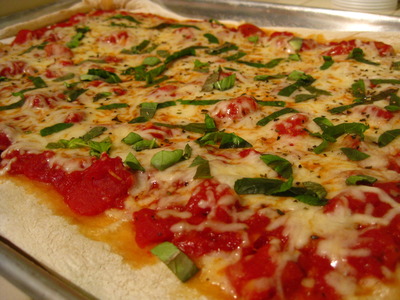 Not that it mattered much in the end… 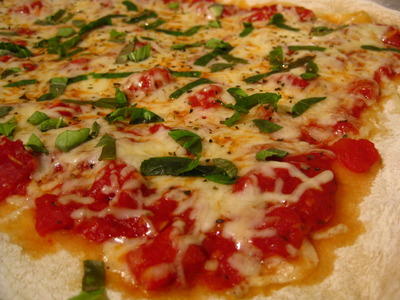 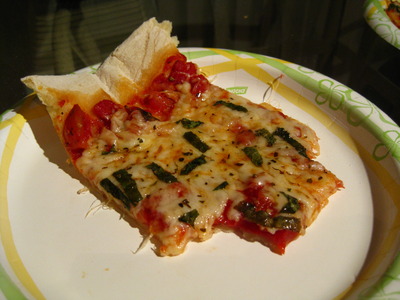 It cut up well… and it tasted good… except… 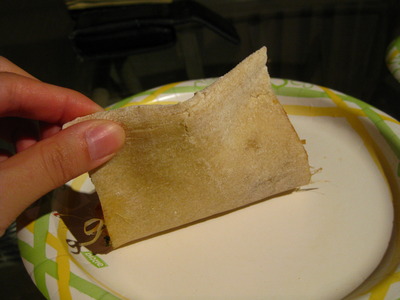 The directions on the package say to roll it out, top it, and then bake for xx minutes.  I followed the directions, but the crust was kind of soggy/soft/not quite fully cooked.  So I stuck it in for longer, which resulted in the basil (I sprinkled it on after I took the pizza out, but before I tried any pizza) turning black.  I had to take it out before the cheese burned, so the bottom remained quite soft.  Edible, but not delicious – the stuff on top was awesome.  Period.

BF’s dad suggested blind baking (well, he said “You have to bake the crust first, that’s what all the pizza joints do”), but I politely kept my mouth shut, knowing this is not true.  I’ve watched many a pie be assembled, and the dough always starts off raw.  True, those are at pizza joints with 900 degree ovens and higher, but… seriously.  Any suggestions BESIDES blind baking (which I know will change the pizza from what it is to something along the lines of bread topped with some delicious stuff)?

Note: I topped it with Trader Joe’s Quattro Formaggio mix – provolone, parmesan, fontina and asiago cheeses, and Trader Joe’s shredded mozzarella.  The sauce was quickly made and quite yummy:

Minced garlic and onion in the bottom of a pot with olive oil.
Once softened, sprinkle with Italian seasoning, stir.
Add a can of diced tomatoes, salt, pepper, some crushed red pepper flakes.
Add tomato paste, a pinch of sugar and cook until desired thickness achieved.

Pretty good for pasta, and for portobello parmesan too 😉

Aside from that – what did I do wrong?  I don’t want to purchase any special equipment (so please, no suggestions to buy a pizza stone) as I won’t be making pizza often, but I’d like it still to be an option occasionally.