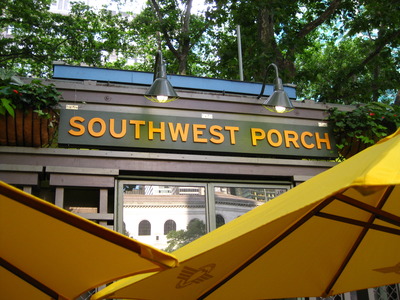 I was recently invited to a press event promoting Southwest Porch, a pop-up restaurant that’s taken over the southwest corner of Bryant Park (40th Street and 6th Avenue). 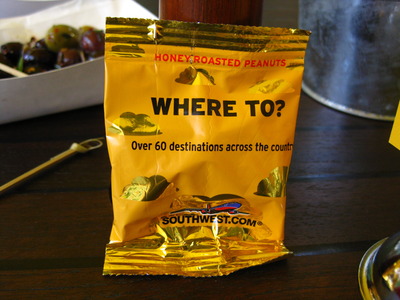 Funny enough, it took me arriving there, sitting down, and my companion mentioning that Southwest Airlines was now flying out of LGA for me to realize it was sponsored by the airline.  Duh!!!  For some reason, I’d just totally blanked on that little fact.  Whoops. 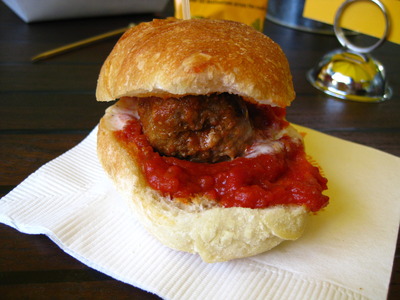 Also funny moment was walking in and immediately becoming nauseous because of the amount of people crammed in by the bar – even though it was outdoors, I get very anxious when I’m surrounded by people.  I was trying to walk to the other side of the bar/space – it wasn’t a small space by any means! – and saw so many cameras (digital, SLR, and video!) that I was super confused what the big f-ing deal was.  At one point, it seemed like they were all pointed near me, as I tried to squeeze past a rather large, short, bald man in a really nice suit.  I noticed his suit.  I noticed he was in my way.  I tapped him and said politely, “Excuse me,” and he didn’t move.  I don’t think he heard me, to be honest.  I tapped him again, harder this time, and said it more loudly.  He didn’t move.  I was getting annoyed – he HAD to have felt the tapping! just please, MOVE! – and I was about to aggressively push him (under the guise of tapping, still) when the person on my left moved and I was able to walk by.

Much, much later in the event, I absentmindedly said, “Oh, right, Colicchio – how do you pronounce that? right, right – has something to do with this, right?” and my companion pointed out that Tom Colicchio himself was the person I’d been half pushing to get out of my way earlier.  Oops.  (Sincerely, I don’t care, if you’re in the way and someone says excuse me, please move.)  I always find myself in these funny moments with “celebrities” that I don’t recognize…

As soon as we’d sat down, a waiter approached us and asked if we’d like meatball sandwiches.  Um, ok!!! 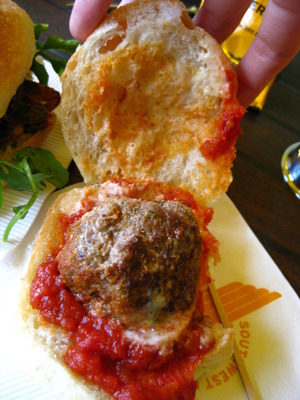 The meatball was nicely soft, enabling us to squish the sandwich down and eat it somewhat neatly, instead of having it shoot out or rip through the bread.  However, I would have liked more cheese on mine, something to counterbalance the meatiness and the sweetness of the sauce.  Otherwise, it was a perfectly suitable meatball sandwich. 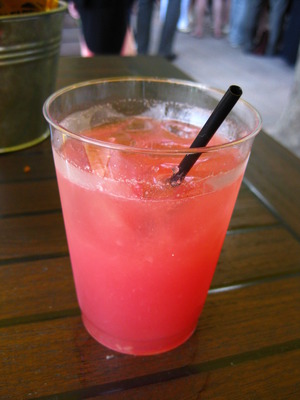 Another waiter arrived to take our drink orders; my first drink was the watermelon-ade.  Bad vodka will ruin any drink… you can call me a vodka snob but my disbelieving friends have run a few blind taste tests on me and yes, I can tell you which one is Absolut and which one is Grey Goose.  I’m not sure this was even Absolut… it had that dirty taste to it that cheaper vodkas often have.  But the concept was delicious enough… maybe when it’s not open bar, they’ll use the good stuff? 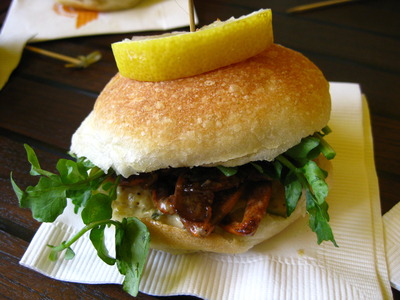 Before I could even finish my first sandwich, another waiter appeared to offer of soft shell crab sandwiches.  Ooh!  I’d read about these on Blondie & Brownie, so I was eager to try one. 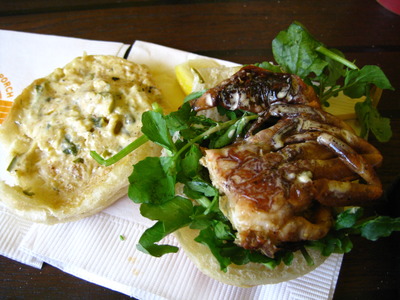 Generously slathered with a lightly kickin’ sauce, add a squeeze of lemon, and this was a pretty good sandwich.  I like soft shell crab though I have to say, mine tasted to be a little bit too far past its molting stage and a bit too crunchy.  Otherwise, the watercress lent a nice bitterness to the sandwich and the crab’s flavor didn’t overwhelm everything else.  I also liked the soft bread. 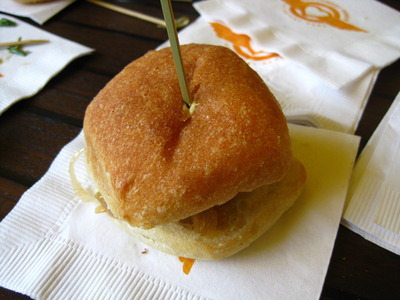 The last sandwich we were able to try was the… “crackers sandwich” – I asked the waiter (different from our previous two) what kind of sandwich this was, and it took 3 tries of him telling us that it was a crackers sandwich before we gave up.  I opened it up. 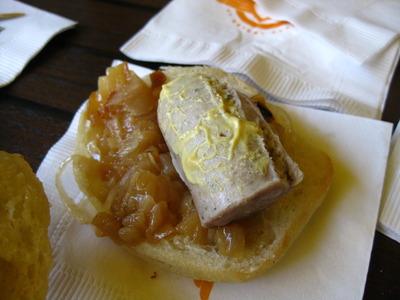 I still had no idea; sausage? doesn’t sound like crackers.  Much later in the evening, we realized he’d said bratwurst.  Ah.  Crackers.

I’m not a huge fan of yellow mustard, but the caramelized onions cut the spiciness of the mustard very nicely, and the bratwurst itself was very juicy and tender.  However, it was still hard enough that the bread attempted to commit seppuku and cut itself in half using the link.  It wasn’t evenly spread out, either – it would have been even better had they sliced the sausage in half and laid it across the bread.  However… I don’t know how they serve the actual sandwich if you were to order it, since these were tasting samples.

Somehow we didn’t see or manage to get any of the pork sandwiches, sadfaaace, I would have loved to try that one!  I have to say here that the event, though very crowded, was well managed enough that though we remained seated at a table, we still were offered food frequently and didn’t have to attempt to camp out in front of the kitchen to fight for scraps, as at some other events I’ve attended (and quickly left). 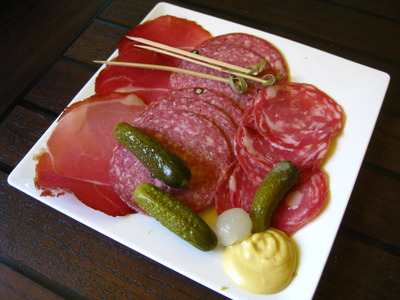 I’m not sure this cured meat platter is on the menu, as I am unable to locate a menu online (strange, right? considering how EVERYTHING is online these days… sheesh).  Anyway, it was perfectly lovely to munch on as we people-watched and discussed how it would have been nice had Southwest Porch been situated such that we could also watch the movies at Bryant Park on the giant screen… unfortunately we were perfectly angled away from the screen, as is the entire porch. 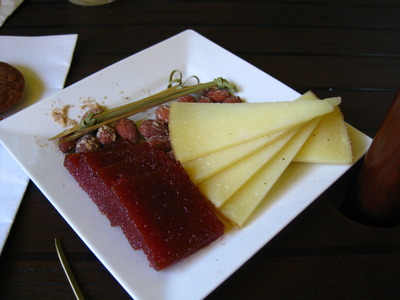 Cheese, what tasted like strawberry-rhubarb jam, and smoked almonds.  Another lovely noshable as we sat in unsuually lovely weather – cool, not rainy, and not sticky-hot like NYC summers tend to be.  The paste/jam complemented the cheese very nicely. 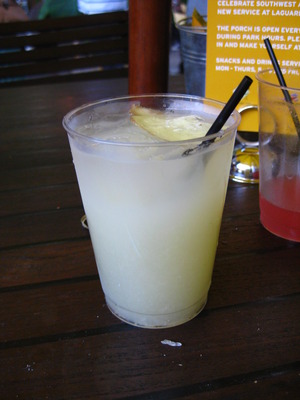 The ginger margarita lemonade was way too tart for me – I’m not a huge fan of raw ginger to begin with, but a splash of agave syrup would have done nicely or just a small spoonful of sugar.  Eek, I couldn’t drink this.

As we sat there, debating whether it was time to leave as the evening progressed, Kathy swirled by.  I’d just seen her last week at the ProChile lunch, but I was still surprised to run into her so soon after when before that, it’d been so long since I saw her.  After giving me a hug, she rushed out “Did you see any desserts?” and then whirled off again when she caught sight of the cookies.  😉  I think that girl bleeds sugar… Her sweet tooth certainly shames mine completely, and even, I think, surpasses the one I had as a kid.  Seriously. 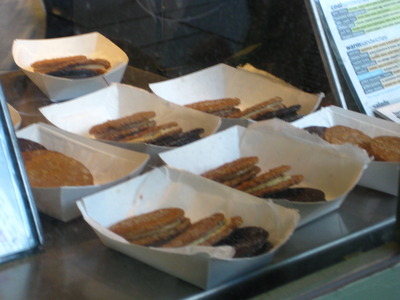 We waited patiently, and then cookies were to be had. 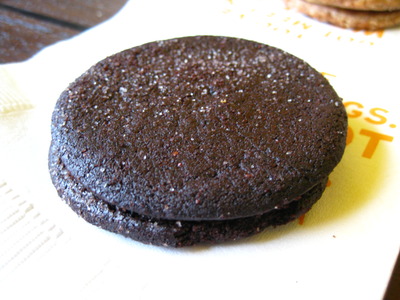 Chocolate with chocolate cream filling.  I was hoping for a salted caramel middle – I thought the white dust was salt – but it was not to be.  The cookie was far harder than I’d hoped it would be – almost like a ginger snap, without the snap/crispness. 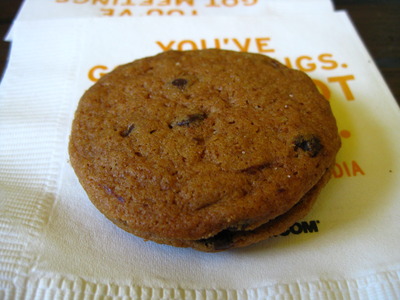 Chocolate chip cookie with a cream filling.  I thought this would be like a whoopie pie – I thought they were all going to be whoopie-pie-ish, chewy, dense cookies with a creamy middle – but nope.  I tasted ginger in this, there was something spicy about the cookie, but my companion didn’t agree or disagree.  Not sure. 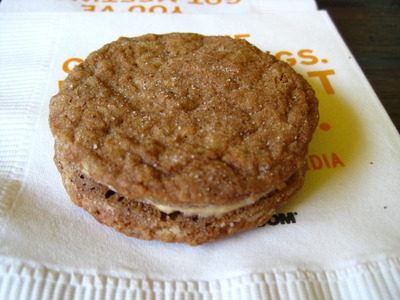 Oatmeal cookie with caramel cream.  I thought that was an odd combination, to be sure, but once I started eating it, I was pleased.  This was by far the softest cookie, most closely resembling a whoopie pie, and the sweet cream filling really tempered out the almost savory oatmeal portion of the cookie.  I liked it enough, though the caramel cream was sweet enough to sate my sweet tooth for a long while to come.

Overall… I found the venue to be a lovely, relaxing area to sit and chat with a friend, maybe have a snack or two.  The food is sufficiently tasty, but without any idea of the prices, it’s hard to peg it as worth it or not.  I had a great time, and thank you to the PR people who set it up – the swag bags were a nice touch, for sure!  The Southwest Porch at Bryant Park is open Monday-Thursday, 5-9 and Fridays from 12-4.