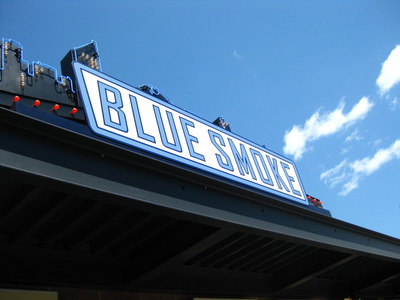 As promised, more updates from Citi Field!  The very hot Sunday, May 10th, or Mother’s Day… versus the Pittsburgh Pirates!  (Yes, coincidentally enough, we’d just watched the Pirates on May 1st at their park!)  We were determined to have Shake Shack so we left super early… sort of… only… nope, we got to the game about 30 minutes early and there was a monster line at Shake Shack.  One day, you will be mine.  One day…

So instead, we went next to Shake Shack, where there was literally no line at all.  Seriously.  We both just walked right up to the cashier. 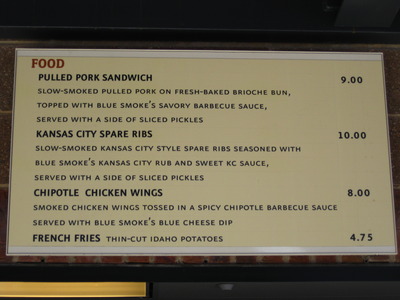 BF was like, “Duh I want a sandwich, are you stupid?”  I kind of wanted to kill the whole menu in one shot, but wasn’t sure I could eat wings as well – and they sound a lil spicy – so we ordered 3 out of 4.  Note: I have never eaten at Blue Smoke in the city, so this is not a comparison to its restaurant location. 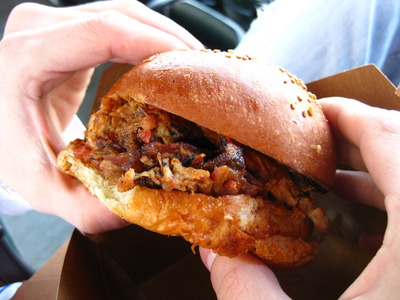 The sandwich looked promising, albeit a lil on the small side.  Whatever.  BF inhaled it, but noted that there was a touch too little sauce, and the meat, while tender and soft, tended to the dry side – which a lil extra sauce would have covered up nicely.  I tried a little piece, and I decided it reminded me of my attempt at pulled pork.  The meat was soft, but could be more flavorful.  Also, they hadn’t done a good job with his portion, and some big chunks remained, which I wouldn’t mind as I like textural contrast, but BF wasn’t too happy with. 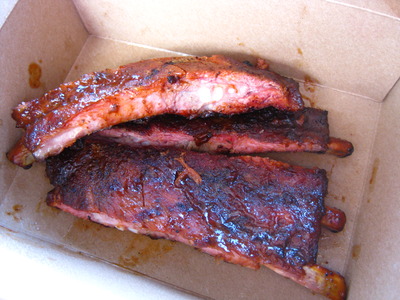 Sorry, there’s only one picture of the ribs because obviously I started eating after the picture and I wasn’t going to cover my camera in BBQ sauce.  (Though it would make the camera taste better… mmm)  Meaty and quite delicious, fatty, I can’t say anything bad about these.  They were good.  I won’t say the most amazing EV-UH, but they were damn tasty and totally worth the $10 I paid for them.  Numm… I would get these again (probably the next time I get pissed off at the Shake Shack line… haha). 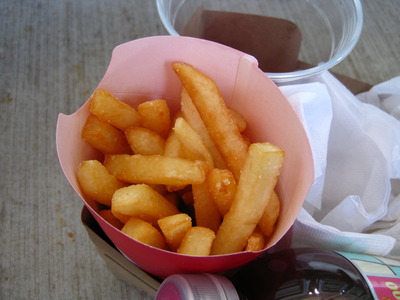 The fries were actually really good, too, though not Box Frites good – fried well, with a crispy exterior and warm potatoey interior.  We were both pleased with the fries because there’s almost nothing worse in the world than bad fries.

Oh, I also ordered their beer, whose name escapes my mind, but it was the special whatever that only Blue Smoke Citi Field has.  It was, as far as beers and I go, acceptable.  (Which might mean watery/weak to some people – I am not a beer drinker, so usually, when I say it’s drinkable, that means it’s very light.)  It was a fine drink on this very hot day – thankfully, our seats are under the awning, so I wasn’t overheating. 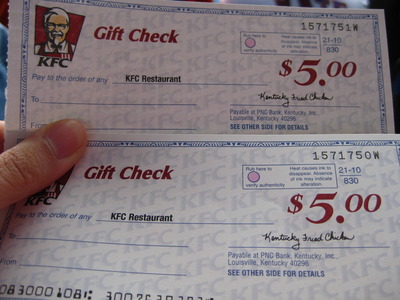 Something funny-  Every home game, the Mets have this thing called “Steal a Deal” – if the Mets steal 3 or more bases during the course of the game, they randomly draw a section number to give out KFC gift checks!  The Mets stole FOUR bases, and our section was the lucky winner!!!  People started rushing to our section to get these, boo, so they started checking tickets, but obviously BF and I had no issues cuz that’s really where our seats are.

Even funnier, this was at the end of the week that was the horridly planned KFC promotion that led to near-riots and boycotts and sit-ins and all this crap.  So I was joking that they weren’t going to take the coupons but no one in my section found it funny.  I think they were the ones rioting because they all knew what I was talking about without me having to explain.  HAHAHAHA.

I really liked the ribs at Blue Smoke and will now be making a point to go to the restaurant in the city… yum.  I definitely recommend the ribs, not so sure about the sandwich, maybe if you ask for a lil extra sauce?