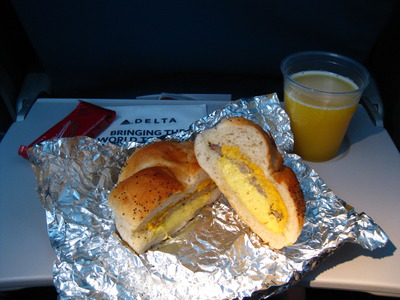 My first meal back eating meat.  What did I choose?

A simple sausage, egg and cheese on a roll from my favorite breakfast place.  (The BF and I often stop there at the start of a road trip for our morning sustenance; I’m not sure how long he’s been going there but I’ve been going there for just under 6 years now.)

As you can see, I waited until I was on the plane and served juice alongside to consume it, so the cheese had melted and then congealed slightly by the time I ate it.

While the sausage played a nice salty counterpart to the eggs and cheese, I wouldn’t say its presence was 100% necessary in the sandwich for a good sandwich.  Sure, it had a nice textural counterplay as well, but I think I could have just as easily eaten the sandwich with no meat and been happy.  Meh. 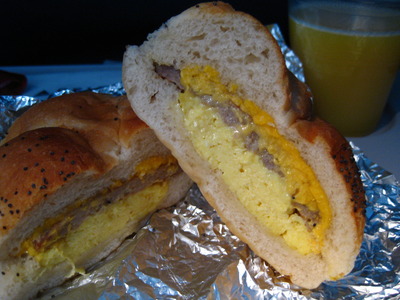 Now, many people suggested options for my first meal back eating meat.  But for some reason, people pish-poshed my concerns that I would be on an airplane for 5 hours directly after, and that it was breakfast.  I wasn’t going to cook a steak at 7 in the morning, nor was I going to consume said steak and then get on an airplane – in case of intestinal distress, I wanted to be in a ‘safe place’ ie my own home.  A lot of the options simply weren’t viable.

That’s not to say, however, that there weren’t a lot of great ideas put forth to me!  I just went with what was ‘safe’ and nope, I didn’t get sick from it, though I did feel dissatisfied and slightly “What’s the big deal?” about the whole issue.

Ah well.  Lesson learned.  I promptly took a nap (and then had to deal with the couple sitting next to me joining the Mile High Club…).