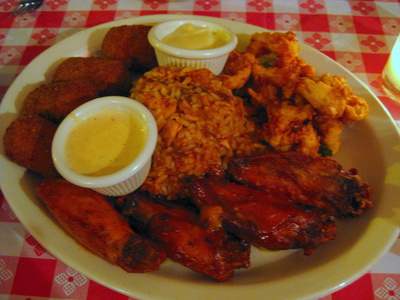 BB and I recently had a “date” – she was feeling a bit stir crazy, I think, from cleaning and organizing all day, and I was much the same.  I obliged but asked if we could stay in Queens – Forest Hills, to be exact – and she responded positively.  Hooray for Forest Hills!

Many months ago, at another friend’s apartment in Forest Hills, we’d tried to order delivery from Mardi Gras only to be told they don’t deliver.  Oddly enough, when we went this night, I noticed that on their specials blackboard outside, there it was in chalk: WE DELIVER.  Oh well!  But that’s how this place landed on BB’s radar.  I’m fairly easy going, so I agreed to return to this Cajun-esque place.

We started off with the Big Easy platter ($12.95), which contained a nice variety of items: popcorn crawfish, finger lickin’ chicken wings, N’awlins fritters, and Jammin’ Jamabalaya.  The popcorn crawfish, which I’d had last time, was worse this time – I don’t think I had any crawfish.  BB trooped on and found one tiny piece in one, but out of all that, that’s pretty bad.

The chicken wings were very meh to me, I don’t recall why but I wasn’t too interested in them.  The jamabalaya had a great flavor to it, mildly spicy but grew spicier with each bite…

but the best of this dish was hands down the N’awlins fritters.  Described on the menu as “a delicious blend of shrimp, jalapenos, cheese and potatoes, lightly breaded and fried until crispy” – uh yes they were!  Well, I didn’t actually taste any shrimp, it was mostly potatoes and cheese that I tasted, but hello, that’s right up my alley.  Next time I’m there – or perhaps one day, just walking by – I’m totally getting these by themselves as an appetizer.  $6.95 for the single order – not sure how many that is, but delicious!!!  The cheese sauce that accompanied was pretty darn tasty as well! 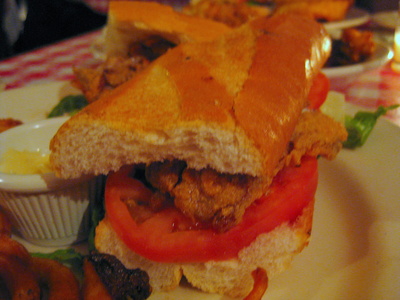 Our main course orders though?  That’s where we made our missteps.  Knowing we were headed to see a movie directly after dinner, we both wanted something not too crazy, something that might not yield any leftovers, something maybe a little light.  All the plates around us were loaded with food – this place does not skimp on food, for the price you get a LOT of food – and we just didn’t want to deal with food coma.  So I decided to get a catfish po’boy, and after some thought, BB decided on the same.  Looks innocent enough up there, right? 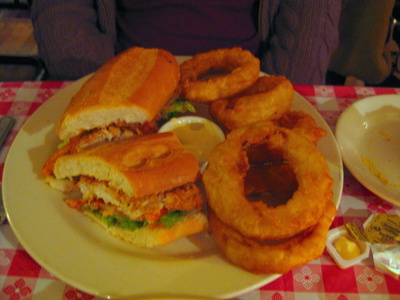 BB’s order with onion rings.  Ginormous.  I tried one and didn’t find them seasoned enough, though they weren’t soggy and had a good texture to them. 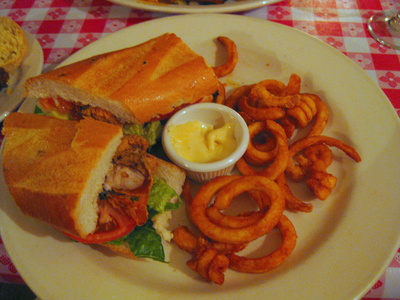 That’s my plate – supposedly with curly fries.  Umm… I’m not sure this picture captures exactly the emptiness of the fries side.  It seriously looked like someone had eaten half my fries before dropping my plate off.  Had I been hungrier, had we not been going to a movie after dinner, I might have said “No, really, you have to take this back, it’s gross,” but I decided against fussing (and even so, I might not have fussed because I’m a pretty passive diner – choosing instead to write about my experiences later, lol). 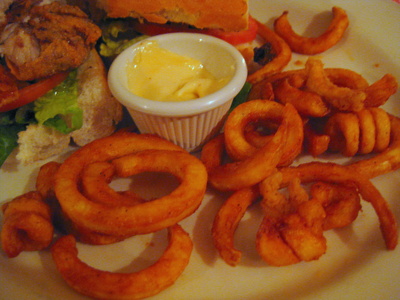 There, that’s a bit better to show you how few fries there are – I hadn’t started eating yet.  Hmm, now looking at that pic, it looks like someone had used my garlic spread as well… oh man, I don’t want to know these things!

In any case, while the fries were tasty, the sandwich was decidely not.  Super fishy in that “I’m not quite rotten but you really don’t want to eat me anyway” way… and just not enough fish to too much bread and too little insides!  I will not be ordering this again, though I don’t hold this one bad dish against the restaurant (since I’ve been there a few times and know there are other items worth looking into).  No po’boys!  It’s the cheapest item on the menu, at $9.95.

Our service was also decidely off that night – our waitress more interested in teaching the table of tourists next to us Spanish than in telling us the specials – but that’s a lot of places on Austin Street, hit or miss.  She didn’t ignore us, and we had what we needed, when we needed it, so it’s not a big deal… just funny to listen to.

I will return again… especially for those N’awlins fritters!!!