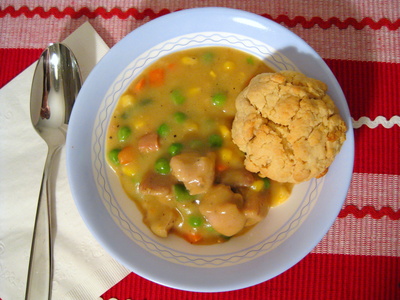 I have never kept it a secret that I can’t bake.  In fact, I’ve mentioned it here.  And here.  And here, and here… but most notably, here, where I EPIC FAILED at making Bisquick biscuits.  Dude.  It’s from a box.  (I can, however, make brownies and cakes easily, from boxes.  Don’t ask; I don’t really get it, either.)  But sure enough, those biscuits went down in the garbage when I wasn’t looking (BF and his dad were too polite to throw them at me in disgust.) 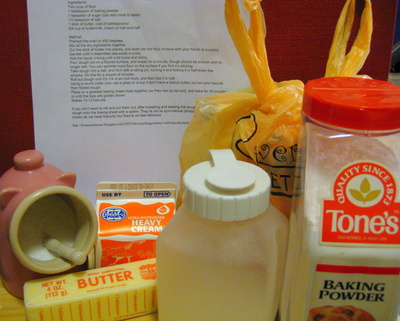 So I don’t know what possessed me to try making biscuits from scratch.  I mean, I adore Lisa, aka the Homesick Texan, with her fantastic food photography, lovely stories, and great recipes.  But I KNOW I can’t bake.  I KNOW this.  But… well, her post on making biscuits from scratch… go read it.  It sounds so, well so easy, how can I mess this up?  REALLY HOW CAN I?  There are SIX ingredients!  SIX! 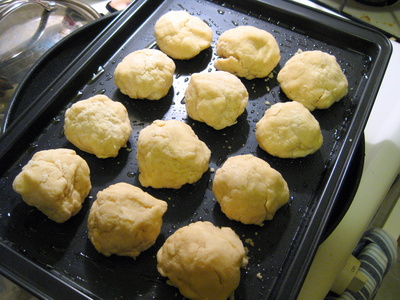 before they went in the oven… I already knew it was over, a disaster.  I followed the recipe to the last drop.  Which is my problem with baking in general – I hate having to whip out measuring cups and spoons – I usually tweak something or other (which was the case with the Bisquick biscuits!), and something gets thrown out of whack because I’m just not that familiar with the proportions for baking properly.  But this time, I measured everything perfectly, and stumbled upon a problem.  The dough didn’t come together quite as much as I’d have liked – crumbly, crumbly, what did I do wrong?

I stared at the dough and in frustration, kneaded it in the mixing bowl so it would sort of smush together more easily and not get everywhere.  Nope, no avail.  I wanted to add a bit more liquid, a bit more cream, but I was terrified of, I don’t know, throwing those proportions off, so I just stared at it sadly.  Now, in hindsight, I DON’T KNOW WHAT I WAS AFRAID OF, because looking at the dough in its crumbly state, I already knew it was going to come out NOT GOOD.  Maybe I secretly wanted to FAIL, because then it’d be like, “See?  I don’t know how to bake!  I can’t bake!  It has been decided!” and never try again, but that isn’t true. 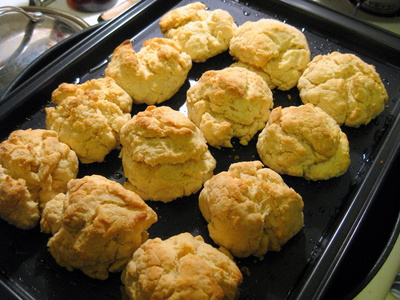 fresh out of the oven

Yup.  No good.  One more baking attempt falls flat, way flat.  I should have just gone with my gut instinct and added more liquid until it formed a dough like I thought it should, but I simply wasn’t confident enough in my baking abilities (or just my instinct when it came to baking) to do so.  Sigh. 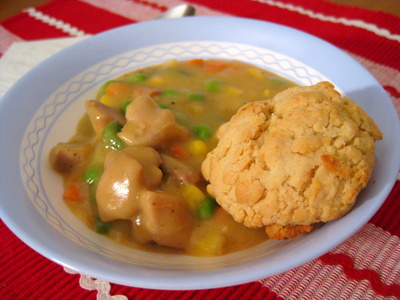 On the bright side, though, even before I began the biscuits, I’d brainstormed up what I might like to eat with my biscuits.  Something hearty and yet not so hearty that a biscuit would be redundant or unnecessary.  Something that I could mop up sauce or gravy with the biscuit.  Something delicious and yumms.

I wanted to make whatever you call the inside of a chicken pot pie.  I hesitate to call it chicken stew, because that brings to my mind something that takes hours to make, something heavy, but really, that’s what this is, without the hours of cook time: creamy chicken stew.  And even though my biscuits turned out to be crumbly messes of almost hockey pucks (okay, they aren’t that dense, and they are edible, if you… well, you’ll see), the afterthought, my creamy chicken stew, turned out to be pretty damn tasty.  So I guess it wasn’t a complete waste of an attempt.

two boneless, skinless chicken thighs, chopped into chunks
kosher salt
freshly ground black pepper
cayenne powder (to taste)
flour
can of condensed cream of chicken soup (cheating! well, sort of, because I Google’d how to make cream of chicken soup and it looks like it takes hours upon hours and is quite complex)
chicken stock (I prefer the low sodium so you can adjust the salt yourself)
some bag of random frozen veggies – I used mixed veggies, which was corn, carrots, peas, green beans and lima beans (which I like) 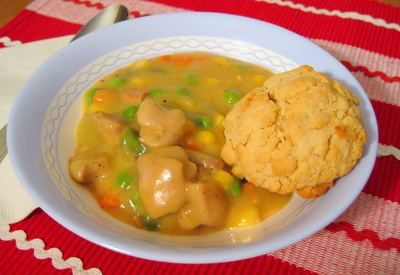 Sprinkle the chunks of chicken liberally with kosher salt, freshly ground black pepper and cayenne pepper.  I was pretty generous with the cayenne, but I’ve been experimenting and pushing my limits with the spicy thing.  Go easy and make sure taste it later if you aren’t sure.  While it’s getting all yummy, prepare whatever biscuits you like.  Once those are in the oven and going…

Heat a heavy bottomed skillet; add a swirl of extra virgin olive oil.  Brown chicken until no longer pink; remove chicken and set aside (I just put it in the same bowl I’d seasoned it in; it was going to be cooked again anyway, so no worries on contamination or anything). 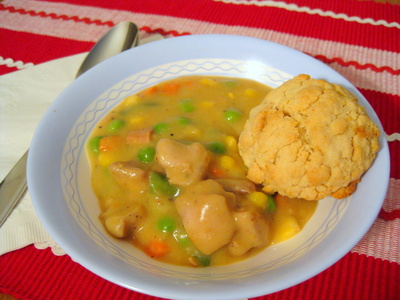 Add a tablespoon or so of flour, cooking it through with the oil.  Return chicken to pan with juices, stirring to coat each piece of chicken with the flour mixture.  Add condensed soup, stirring to break down and “melt” a little, then add chicken stock.  I added one can initially, then added more later as I decided it was a bit too thick for me.  Add the frozen veggies and stir, heating through.  Allow to come to a small bubble. 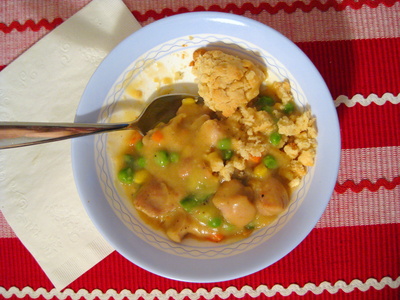 Well, since clearly my crumble biscuits were not going to be easy to swirl around a plate, sopping up every last bit of delicious creamy chicken stew, I decided to do this the easy way.

I crumbled that crumbly sucker into my bowl of stew and stirred it around. 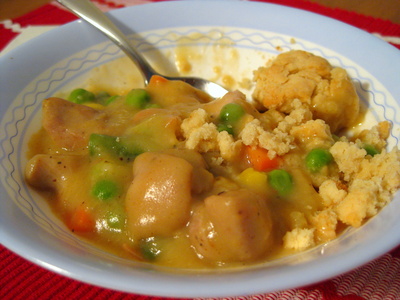 This definitely thickened it up a bit more, so I decided it could use more stock.  In fact, when I reheated some of the leftovers for lunch the next day, I added some more chicken broth to thin it down some more – you can see it’s still pretty thick – so that the next biscuit I crumbled into it would be more easily absorbed. 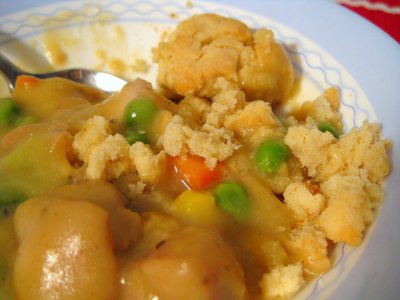 So one giant, EPIC FAIL led to a delicious discovery.  My only issue is that I was just trying to use up what cans of condensed soup I have leftover from the days of way, way past… and now am not sure what I’ll substitute to make it again.  My guess is cream and chicken stock, or chicken bouillion, but I’m not 100% sure…  Well, I guess I’ll figure it out when I get there.  I made totally enough of this to freeze portions for future bentos, and then some.