I’m sure you’re all sick of Thanksgiving, but I don’t care.  People asked to see my Thanksgiving, and here it is, in all its glory.

So here it is, mostly without recipes.

It wouldn’t be a Feisty Family Gathering without the ubiquitous deviled eggs (yes, there’s a recipe-ish in there, if you look).  It’s a quick, easy party food that our father taught us how to make when we were very young – possibly one of the first things I learned how to make – and they’re delicious, fun, finger-friendly food. 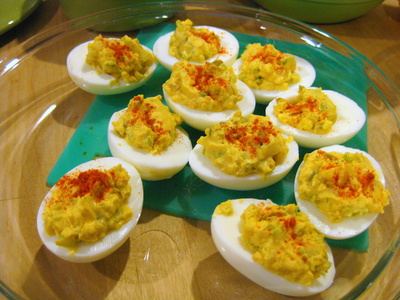 No, that’s not all of the ones that she made… my sister made a dozen of these beauties, but we were busy stuffing our face with other stuff. 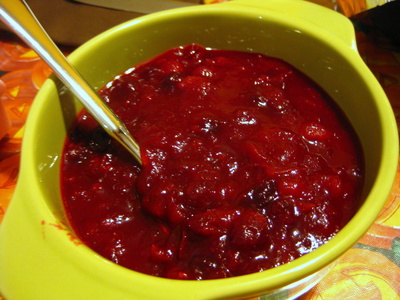 Homemade cranberry sauce – my first time making it, my first time eating it.  I looked through a lot of recipes and finally came up with one that I thought might work, and it did – this was a big hit amongst the people who tried it (some people opted out, believing they don’t like cranberry sauce, and I didn’t mind).  It was even better the next day… well, you’ll see how I used it 😉 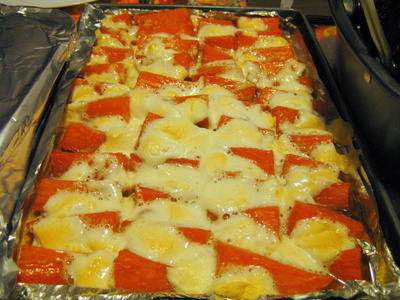 FeistySis’s mother-in-law brought over a few dishes as well… here is her sweet potatoes with marshmallow topping.  I won’t give away her recipe, but I’ll tell you that I normally don’t like sweet potatoes all that much, and these were fantastic.  Ooey, gooey, sweet, and every piece with enough marshmallow… yumm!  (None of those people who scoop the marshmallows off all of the potatoes and don’t take any potato!  You mean, selfish people!!!) 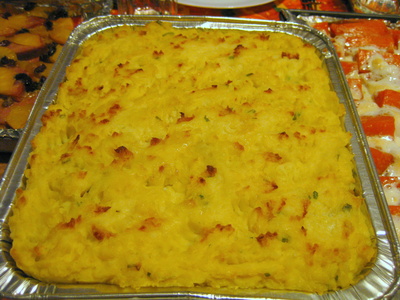 FeistySis’s mother-in-law also brought this – looks like a giant tray of mashed potatoes, but actually, it’s dressing.  She includes mashed potatoes in her stuffing, but also layered some plain mashed on top “in case someone doesn’t like dressing” – but we were all brought up better than that, so even if one of us had wanted just mashed potatoes, it’s unlikely we would have scooped just the top off (as it is, I wanted just dressing, but couldn’t bring myself to scoop underneath for just dressing). 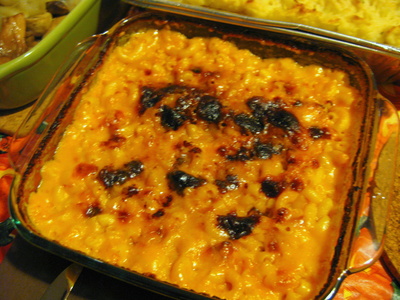 An unfortunately very blurry picture of Snorlax’s contribution to the table, macaroni & cheese.  I know for a fact he used this recipe. 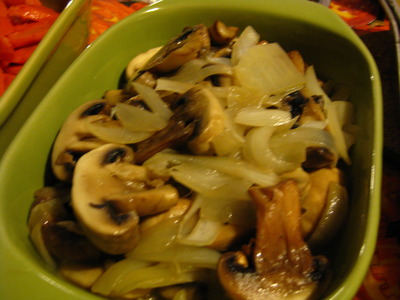 Another unfortunately blurry shot of mushrooms and onions sauteed in butter, from FeistySis.  Hey, I was hovering over the table as the dishes were brought out, and people were hungry! 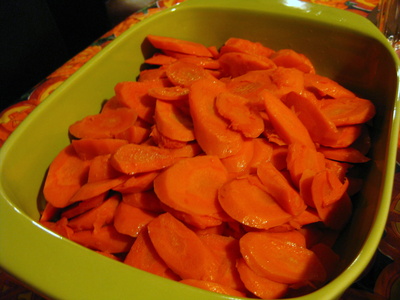 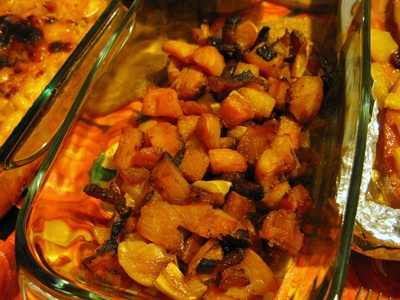 Ack, the colors blend together, but here is my surprise last minute addition to the table: roasted butternut squash with pancetta, whole cloves of garlic (which melted and mixed onto each piece so gloriously, yummmm~!) and maple syrup.  This was quite delicious! 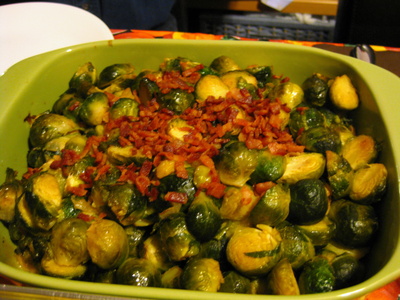 FeistySis also made Brussels sprouts with bacon, which were delicious.  She used a Rachael Ray recipe. 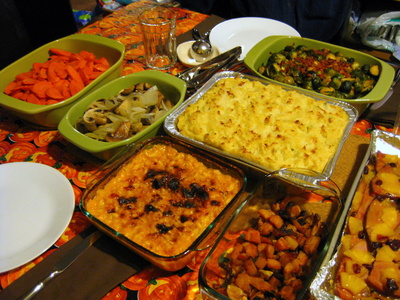 Glamour shot of the table before we dove right in (well, there’s more pics). 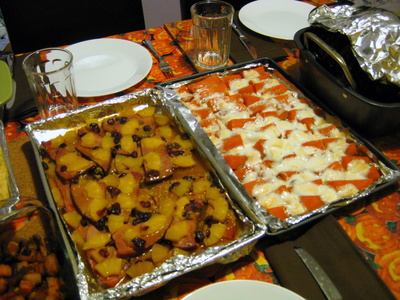 FeistySis’s mother-in-law also made ham, which I didn’t touch: FeistyMom declared loudly, “She’s allergic to ham,” which I sighed and said, “No, I’m not allergic to ham!  I love pork!  Snorlax’s ex girlfriend poisoned me with ham and since then, I haven’t been able to eat it,” but she just rolled her eyes at me.  This is a true story- everyone else ate it and was fine, but I ate it and I won’t disgust you with the ugly details – this is a food blog! – but let’s just say it lasted a whole week, I was completely incapacitated and unable to eat, and I lost 15 lbs.  Snorlax dug in and said it was great, though. 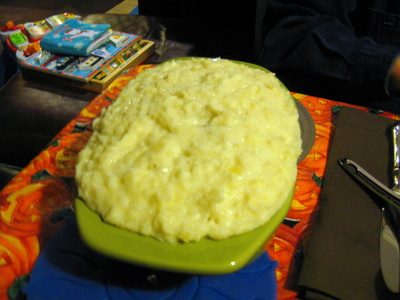 Yet another blurry photo.  FeistySis is also a nut (we ARE from the same family, afterall) and somehow decided that I really wanted mashed potatoes, so she mashed not one pound.  Not two pounds.  Not even three.  She mashed five pounds of potatoes.  FIVE.  I took a lot home and have been loving it, since I normally am very carb-averse… but my waist sure doesn’t love it.  Hahaha.  See how much my older siblings spoil me?  😛 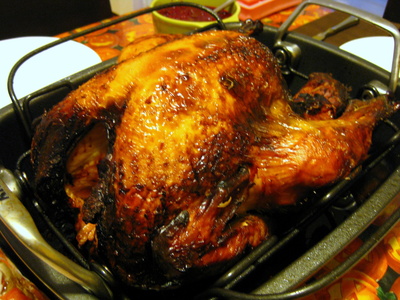 I’m kind of sad that it came out blurry, but look at that beauty!  Only the 2nd time I’ve made turkey ever – the first time being here – it came out wonderfully.  Tender, moist, flavorful, delicious.  I was very happy with the end result, though I think I’ll try some different seasonings in the brine next time. 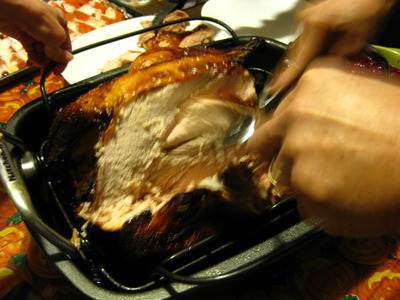 FeistySis’s father in law carving the turkey.  He offered, and I wasn’t 100% sure I could carve properly with everyone watching, so I stepped aside. 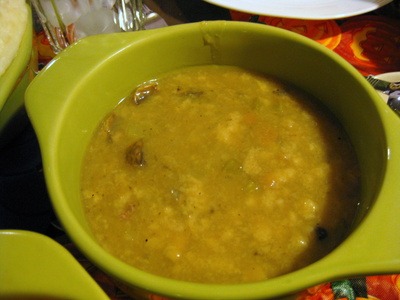 My mushroom giblet gravy.  So delicious… it’s not lumpy because of flour or anything, it’s crumbled bread and saltines.  I used Paula Deen’s recipe last time and I loved it so much (remember the sad face I made when BF dumped out the rest of the pot, thinking it’d been sitting on the stove all week?), so I just made it again with some small modifications.  Gosh, it is good.  🙂 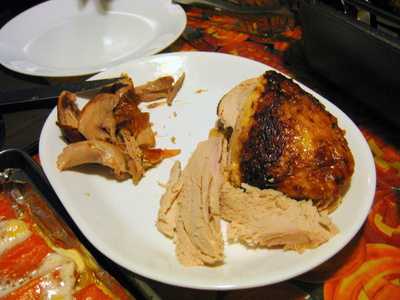 Nice slices of white meat, and some bits of dark meat…. yum~! 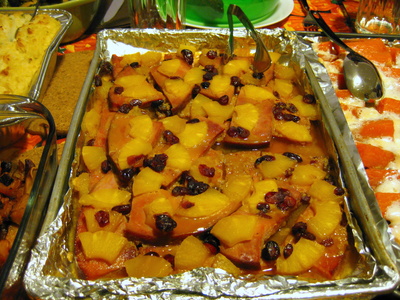 Shot of just the ham. 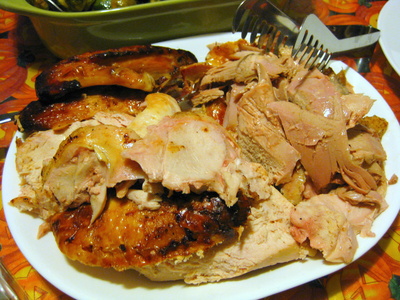 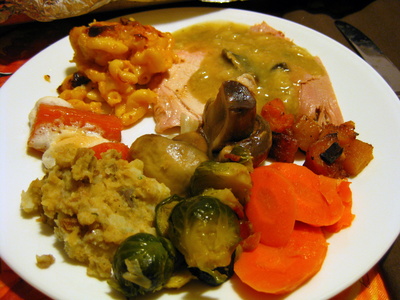 My first plate.  From top left, clockwise: macaroni & cheese, turkey and gravy, butternut squash, carrots, Brussels sprouts, stuffing, sweet potatoes, and some mushrooms in the center.  I ate more than this but I was too busy stuffing my face to take more pictures.  Apparently, I also forgot to take pictures of dessert, oh well.  (This year we had the least desserts everrr, I think we had a cake and a pie?  Yes, one each, because my family tends towards the savory side, so we totally forgot about dessert.  Normally, our cousins join us and bring massive loads of desserts, hehe, our bad for forgetting the desserts… haha)

… what, you think that’s it?  What about the AFTERMATH???  I took home, I believe, 4 containers of food, plus the turkey frame.  Hey!  I’m broke!  I bring my lunch every day… those leftovers are being put to good use! 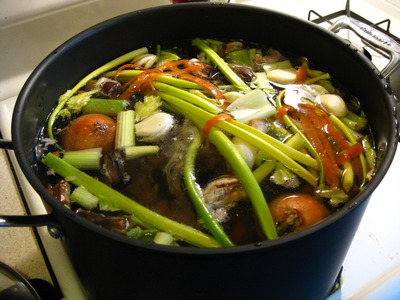 The turkey frame – broken into pieces – went into my ginormous stock pot, 12 quarts (last time I wrote that it was 12 gallons … uh, no, haha), along with some whole cloves of garlic I smashed, an onion I cut in half, bits of celery, carrot shavings, and some scallions I had that I knew I wouldn’t be using anytime soon, and the rest of the thyme I’d bought for the turkey.  I let it all sit over super low flame; it took 3 hours to start bubbling away.  I did this for about 12 hours, but it doesn’t seem as thick and yummy as last time… I wish I’d taken better notes – did I boil it at high heat for a little bit?  Did I add something to it?  What did I do?!  Sigh… (When I strained all of this and put it in containers to freeze, I had a monstrous number of containers… like. 9?  Looks like I’m good for stock for months, yay for cheap/inexpensive solutions to culinary needs!) 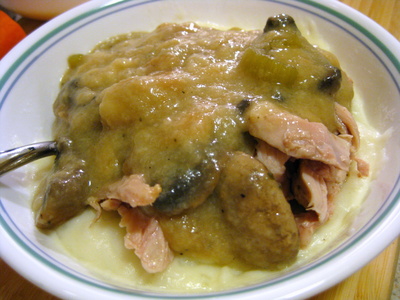 My first meal with leftovers was on Saturday, where I layered mashed potatoes, turkey meat bits (I tore these with my fingers), and then gravy on top.  MY GOSH THAT WAS DELICIOUS; so delicious I imitated it for my lunch shortly after.  Well, twice. 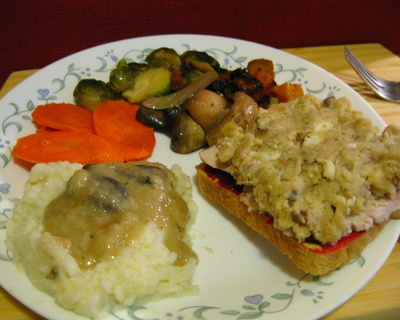 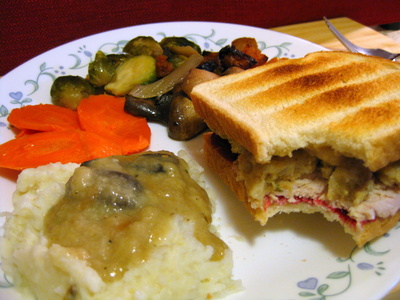 Do you understand what that is?  That sandwich actually tops the last Amazing Sandwich.  How?  By the simple schmear of homemade cranberry sauce on one slice of toast.  It added just the slightest tang of sweet/sour to the whole sandwich, just a hint, and it brought this sandwich to transcendental levels.  I even made one for lunch because it was THAT good.  Dude.

Toasted white bread… schmear of cranberry sauce… slices of roasted turkey breast… dressing spooned on top, then flattened down… spoonful of mushroom giblet gravy (of course with a mushroom or two tossed on top).. another slice of toasted white bread.  I was almost crying tears of joy for how good this was.

Monica’s Moistmaker sandwich be damned.  This did not need a moistmaker.  zOMG, that good.  Drool.  I think perhaps dinner tonight should be one of these bad boys… wait, no more turkey 🙁

… That’s basically everything I’ve done with my leftovers so far; no re-badging needed, because I love how everything tastes the way it is already.  I know you can re-make all of these things into other dishes, but I didn’t find a need because they are so darn tasty the way they are 🙂

HAPPY EATING!!!  I hope your Thanksgiving was at least half as good as mine, that would mean it was over the top wonderful!!!