You read that right, baby! Enter to win a chance to try GRASS FED BEEF* FOR FREE! I alluded to it here… So if you didn’t sign up yet, what are you waiting for? (Put feistyfoodie in the referral box if you like, we can be friends!) All you have to do is leave a comment on this post with your Vote La Cense username and why you’d like to try grass-fed beef. There are a ton of great reasons, so don’t be shy! 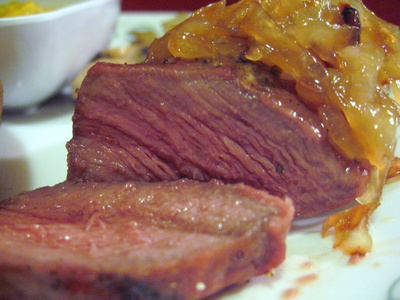 I recently had an opportunity to try their product myself free of charge (and wanted to share it with you guys; aren’t I nice?). The above is a picture of the petit sirloin, grilled up nice and simple, with just salt and pepper, and I added some caramelized onions on top (not that it needed it, but I felt like making onions). I have to admit that I was a complete skeptic that the flavor would be different; I thought perhaps texturally it might be softer, leaner even since I’ve read that grass fed animals don’t fatten up quite the same as grain-fed (which is why they feed the cows grain; they fatten up more, equals more meat to sell, equals greater profit, plus grain feeding is, I believe cheaper, even bigger profit margins). But the taste? Since I prepared the steak so simply, with just salt and pepper, I definitely tasted an herbaceous quality, almost like I’d added some fresh herbs to the steak as well. It definitely added an interesting counterpoint to the meat, though admittedly, my boyfriend was not as enamored as I. 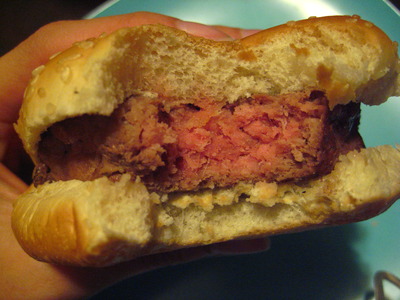 I also got to try their burger patties. The above shot is kind of self-serving, since I cooked it, and has less to do with their meat than it does with my skillz at burger cooking. Hah. Anyway, I haven’t been a fan of pre-formed burger patties in ages; these come unseasoned and it just isn’t that satisfying to have to season your patties only externally. I admit that right upfront, these burgers could be better if they came seasoned or if they came as a block of meat for you to form your own patties (though some people probably like the ease of having pre-formed patties, else no one would offer these, right?). But the taste. This was really interesting to me. Simply grilled with sea salt ground on either side, with freshly ground black pepper (do you see a pattern here? I definitely feel that with good meat, the simplest preparations will suffice.). In any case, though I put on what I thought was a ton of salt and a bit of pepper, neither flavor shone through particularly. My mother had a bite and said “What else did you put on this?” I told her nothing but salt and pepper, does it taste grassy? And she laughed at me. My boyfriend had a burger and again, did not like the grassy tones but also laughed when I told him what he was tasting was the grass-fed-ness of the beef. Whatever guys! I’m not the only one who says that about grass-fed beef! You taste it but refuse to admit to something so simple and, well, obvious as “What the cow eats shows in the taste of the meat.” We’re so used to eating grain-fed meat that it becomes, to our tongues, what’s “normal” and how it “should” taste. But it’s not. It should taste grassy, herbaceous, and delicious.

What are you waiting for?

This will enter you for a chance to win two of your very own grass fed beef patties, and a petit sirloin. They will come straight to your door in special packaging to ensure its absolute freshness!

Contest ends October 27, 2008. A very special day indeed (reasons why will be revealed at a later date)… I will pop the number of comments into a random generator and it will tell me whose comment wins. GOOD LUCK!!!

*This contest is hosted by La Cense and the people behind Vote La Cense. I did not receive any monetary consideration to run this contest, though I did receive a package of grass fed beef free of charge for me to try out before running the contest.
**Winner will be the recipient of 2 grass fed beef burger patties and 1 petit sirloin, sent directly from La Cense. I will not have access to any personal information that you have not chosen to share with me at any time.
***Contest limited to US 48-contiguous state residents only.