Via FoodBuzz, I was invited to attend a Top Berry Luncheon, hosted by the California Strawberry Commission. 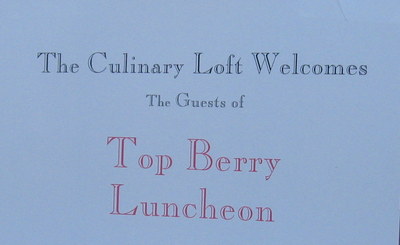 Meant to showcase the versatility of the strawberry, how it can be used in savory applications as much as in sweet, and overall good for you, anytime, any way. 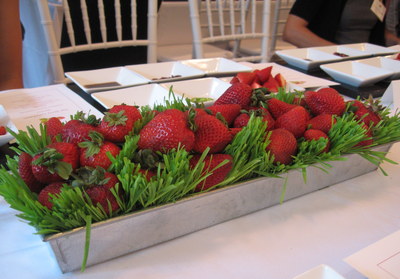 I arrived promptly at the Culinary Loft, a space I hadn’t realized existed- it’s so cool, I totally want to throw a dinner party there!, at the appointed time.  Guests were greeted with name tags, place cards, and a glass of sparkling water with a strawberry garnish on the rim. 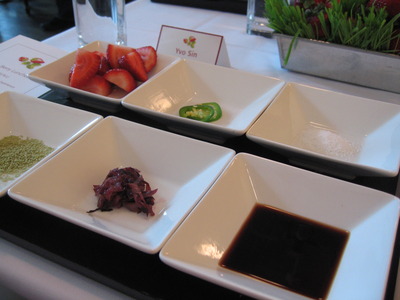 Awaiting each of us at our places sat this set of six dishes; from top left, clockwise: cut strawberries; jalapeno slices; salt; Balsamic vinegar; sauteed radicchio; granulated kombu (seaweed).  We were instructed by CJ, from Top Chef (sorry! I didn’t get a non-blurry photo of him, and I didn’t/don’t watch Top Chef so I don’t really even know who he is), to try the strawberries one at a time with each item, starting from the bottom left and working our way around, counterclockwise.  The kombu was a nice flavor contrast – distinctly umami (savory; the “good” taste), while the radicchio was awful.  I’d never had balsamic with strawberries, though I’ve seen the combination on television cooking shows, and was pleasantly surprised that they weren’t insane, it actually tastes pretty darn good, a quick dip- I bet marinated would be delicious as well. 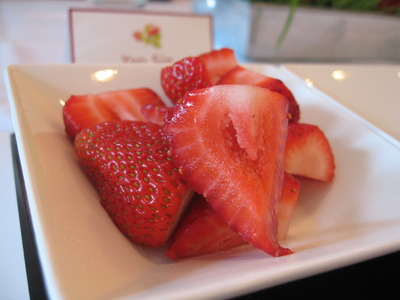 The salt, however, overpowered easily, or was lost to the strawberry; you had to be careful with how much of a dip you went with.  I’m not a big fan of spicy, so I took a teensy bit of jalapeno and though it wasn’t disgusting as it might sound, it easily kicked the strawberry flavor to the background while my mouth tingled from the jalapeno. 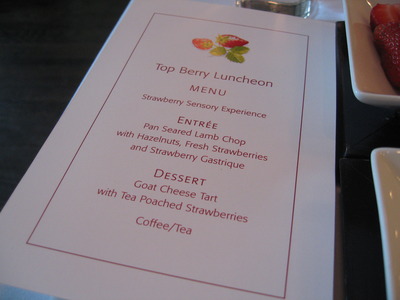 Once we were done with that, CJ took a few minutes to show us how to prepare the dish we were about to be served.  Though I’ve never watched Top Chef, I used to occasionally watch The Next Food Network Star, and you could tell he was a former contestant on a cooking show contest… I can’t explain it, but his patter, his movements, all very food-show-contest-like.  A few of his jokes fell flat, perhaps since I didn’t know anything about him, but one of the tables were clearly fans as they hooted and giggled at everything he said, including an odd joke of how strawberries can prevent cancer, which he wish he’d known before he lost his left testicle; also his best friend.  So he said.  (I later read that he had lost a testicle to testicular cancer, which is definitely sad, but I’m not sure if it was necessary to divulge this while he was cooking…) 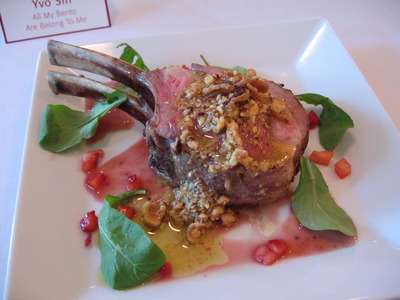 ***it should say The Feisty Foodie underneath my name…

Watching his cooking method, though, I could see why he hadn’t won.  He was awkward, and some of the things he did or said seemed extremely silly.  For example, he showed us his “trick” to peeling garlic, which was to slice one end, and then rub it in his hands, before smashing it with his knife and proceeding to chop it anyway.  To me, it’d just be easier to keep with the normal “Smash, remove peels, then chop” in that case.  He also added way too much olive oil to the hazelnut sauce he was creating… and he just didn’t seem to know his stuff that well.  He claimed that there was more calcium in strawberries than in orange juice, and was immediately corrected by the California Strawberry Commission that there’s more vitamin c in strawberries than OJ (a much more impressive fact, in my opinion), and later admitted, once asked, that he’d never used strawberries in a savory application before today.  Interesting. 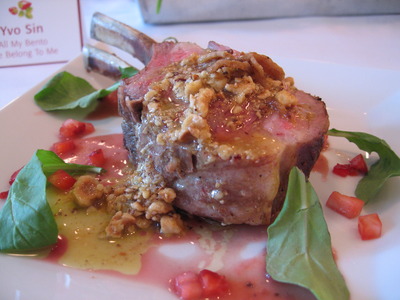 I must say, the dish was tasty- the lamb super soft, super flavorful, and fatty as well.  The olive oil in the hazelnut “sauce” was a bit much- this cut of lamb is pretty fatty, hazelnuts are very oily as well, so there was a lot of fat in this dish.  But the contrasting textures of the hazelnuts with bites of lamb was sublime… adding a small piece of fresh strawberry brought it up to another level.  I really enjoyed the dish overall, though I can’t say the strawberry was a featured flavor.  If this was an Iron Chef dish, it’d have lost points for not showcasing the secret ingredient well enough.  Hazelnut was definitely the star here.

Last but not least, we were served a goat cheese tart with tea poached strawberries.  I think CJ was meant to do another demonstration, but time was running short and as most people were on their lunch hour, it was cut out and instead we were served and presented a slideshow by some of the growers of California strawberries.  I learned a bit about strawberries, their antioxidant powers, how they boost your memory and play a key role in memory retention… all while noshing on the above tart.  Initially, I liked this tart despite not being a fan of goat cheese; eventually, the goat cheese overtook and overpowered the strawberry taste, which isn’t surprising at all, considering how strong goat cheese tastes.

Overall, it was a fun and informative event, and I met a bunch of people, while seeing a bunch of people I’d already met, again.  (Hi Brendan!  Nichelle!  And of course, my partner-in-eating, StB!)  I would love to see more events like this… although it was a little disappointing that the strawberry wasn’t highlighted as well in each dish as it could have been.  Thanks to FoodBuzz for inviting me, and thanks to the California Strawberry Commission for holding it!!! 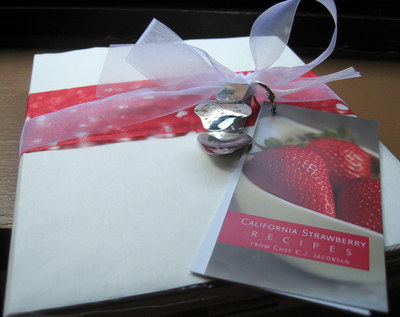 The best part, as with any great press event, we got goodie “bags”!  Look how pretty they wrapped it… a little tongs shaped like strawberries (though I’m not sure what to use it for?), a booklet with recipes for the dishes we had, and then a book on Top Chef with recipes and loads of pictures.  Awesome, and extremely informative!