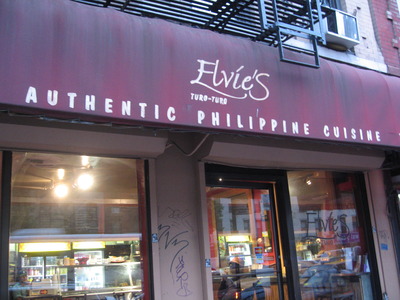 This past Saturday, HB and I headed to our annual Yankees/Mariners game. (Why the Mariners? Because we started when I was still mad at the Mets for losing the Subway World Series on my birthday, and it is much easier to get Yankees/Mariners tickets than Mets/Yankees tickets.) Despite the game being completely depressing for me – I know the Mariners aren’t the greatest team, but the sloppy playing that day really put my tail in a spin [omg, the Yankees just kept hitting it through the same hole; if it happens more than twice, MAYBE YOU SHOULD COVER THE G’DAMN HOLE?!] – sorry, I get really excited about baseball) – we’d already decided to spend the whole day together, an unusual occurrence in today’s busy lives of late 20 somethings – and just wandered around a bit.

Meanwhile, I’d been texting with our mutual friend StB, asking her where we should eat, if she wanted to come join us, other people are coming, she should just come, blah, blah, blah. At first she suggested BBQ, but then found negative reviews and changed her mine to Filipino food. Having had very little experience with Filipino food before, I was definitely game, as was HB, so off we went.

PB/MD and SW joined us at the restaurant, making our party complete.

Unfortunately, even though this was less than a week ago (!), I can’t remember the names of anything… (but stay tuned for a really funny pic!) 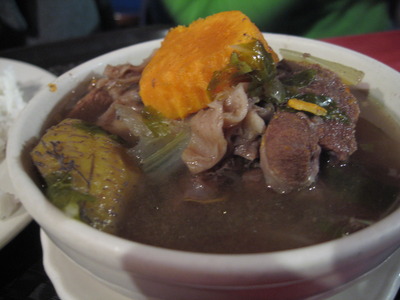 PB/MD’s beef soupy thing. This was served with rice. I know she really liked it; “I’m sick, this really hits the spot” were her words as she slurped it down, putting rice into it and eating it that way. 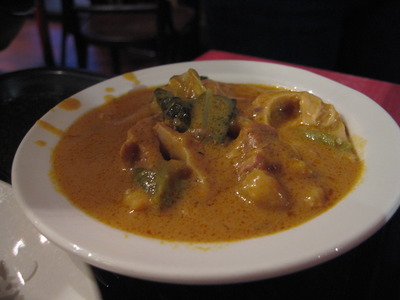 StB’s something or other… hold on, she reviewed it! (The funny thing is, until I got to this picture, I swear I didn’t read her review, but it’s going to be very similar…) 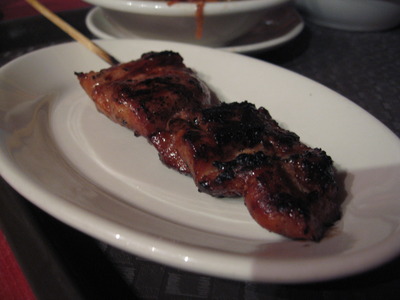 SW’s chicken skewer. Looked good so I got my own! 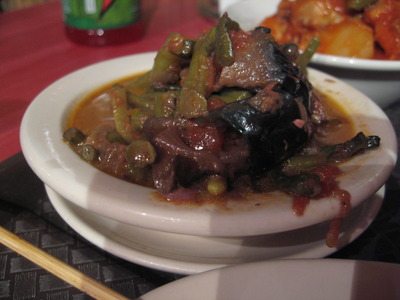 Err… SW’s something else. Veggies maybe? You may find this really funny, but it was cafeteria style with the menu on the wall behind the counter, so we took turns going up to order, and I went up last, by myself, so I didn’t hear anyone giving their order. 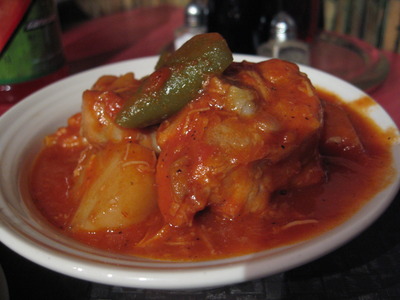 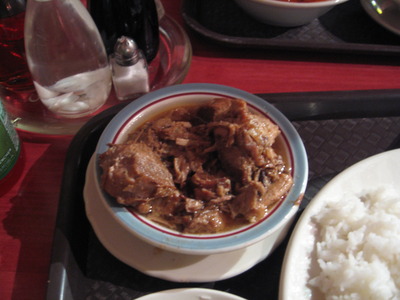 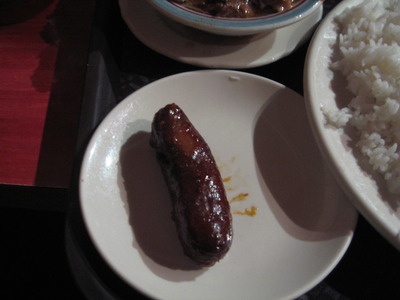 HB’s meat (oxtail?) and sausage, served with rice again. Seriously, I heard no complaints from anyone all night about their food, but we were busy gabbing about a lot of other things and so didn’t really talk about the food.

I decided to be different and not order soupy/saucy style stuff (say that 10 times fast!). 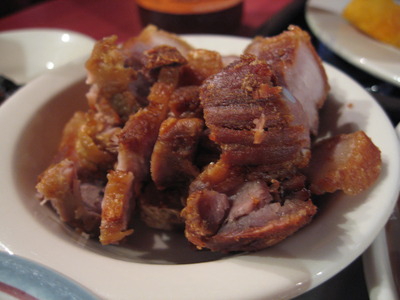 I went up to the counter and eyed everything behind the glass. The guy working there – maybe the owner? – was really helpful, explaining what the various dishes were to each person, and just really nice. I ordered the fried pork belly – I can’t resist pork belly, it’s not in me to do so, and it looked good!- and he offered to chop it up for me. Obviously a good choice, as otherwise, it’d have been a long strip and I’d have been attacking it with my butter knife. I was surprised that there was a bone in it, but it tasted good… familiar… like crispy skinned pork (a Chinese butcher item) without the skin. I love crispy skinned pork, but a large part of the appeal in that is the skin. And this was a bit dry… 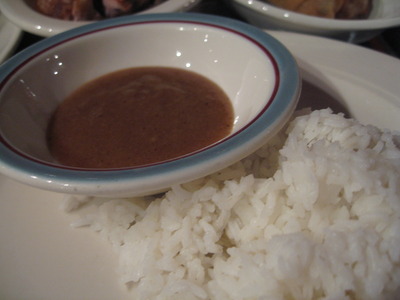 …it did, however, come with rice, which I at first turned down, but the guy told me I should get rice, so I took a little bit. He also gave me “liver sauce” as he called it, which I was hesitant at first but I was really glad I took it. I think I could eat an entire bowlful of white rice with just the liver sauce (a big deal for me as I detest plain white rice). It was savory and salty and delicious with the fluffy rice, or the pork belly dipped lightly in it- mmm. I must find some of that and buy it, actually… 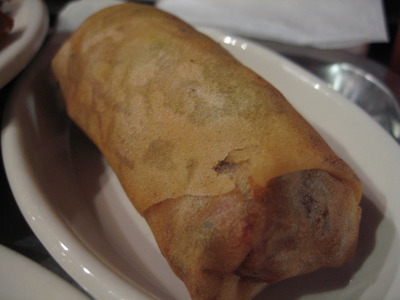 I also ordered a lumpia, probably the only Filipino food I’d ever had before this night. Basically similar to a spring roll, filled with veggies and whatnot, unfortunately these do not benefit from sitting out. Super soggy and the insides were pretty unimaginative nor flavorful. I barely ate two bites before I gave up. 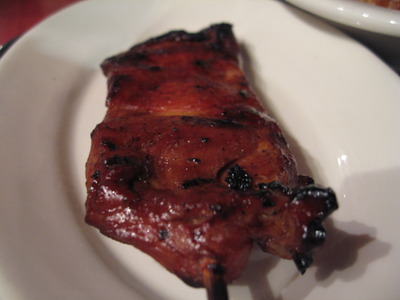 And last- definitely least of my dishes, even worse than my lumpia wa the chicken skewer. Augh, white meat and super dry, not very tasty at all, I was really disappointed.

Note: both the lumpia and the chicken skewer benefited from being dipped in the liver sauce. 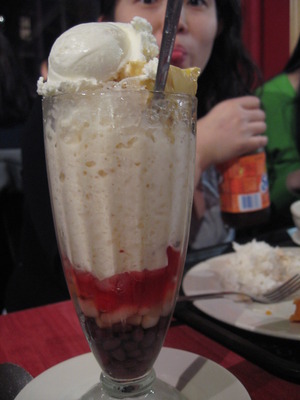 *notice something funny in the background? perhaps… PB/MD making faces at me? 😛 back at ya!

StB’s halo-halo, an ice dessert. Check out her review for what she thought of it! I didn’t try any of it, I was stuffed and it looked super rich. After having eaten all that pork, I opted out of eating the halo halo (and instead had tiramisu when we trooped over to Veniero’s afterwards for a nightcap… hahahaha).

Yvo says: The super friendly and helpful staff will guide you to a great dish, and the food is pretty cheap. I think all of my food came out to $10-12 or so, not bad at all considering. I think it’s a great place for an introduction to Filipino food (I’ve heard some Filipino restaurants are really expensive), and its location is pretty good with its prices- close enough to Union Square and lots of places to hang out after/before dinner.
recommended