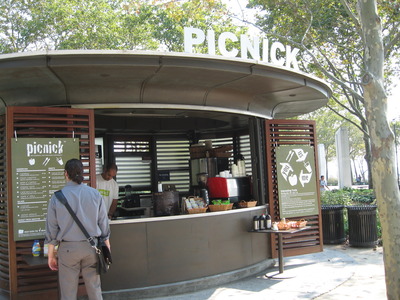 **Orzo makes his debut appearance in an actual picture on my blog!

StB mentioned this place to me, saying “Hey, it’s near you,” to which I responded dubiously, “Are you sure? Usually when a place says “Battery Park” they mean much further north…” so I dismissed it rather quickly. To both of our surprise, a few weeks later, I sent her an email talking about a place with the best coffee in the US- the only place you could get Terzi coffee… yeah, I’m not always that brilliant but she pointed out it was the same place. Cool, and off I went to try this place, even though I’m not even that into coffee. Whatever… I wanted a latte.

I’d brought my lunch, per usual (see Feisty Bento!), but Orzo wanted to try a sandwich. The picture on the front page of their website looks awesome, and so his choice was made. 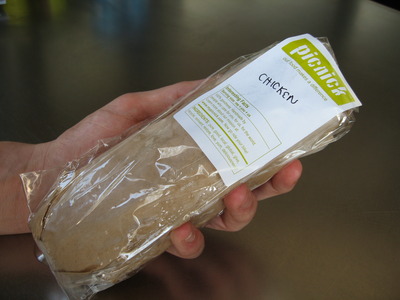 When Orzo asked for the chicken club sandwich, I’m sure we were both horrified when the man turned around and took this sandwich out of a little fridge underneath the counter. A pre-made sandwich. A TINY one, at that. A pre-made, refrigerated sandwich that was barely the size of Orzo’s hand. So not cool. But somehow, it got worse. 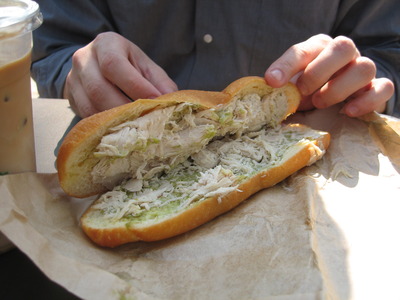 Um… where’s the bacon? The heirloom tomato? That tiny schmear of avocado is a sorry substitute for the beatiful slices in the picture on their website; the bacon and tomato are suspiciously missing and why does that chicken look like shredded garbage as opposed to “organically poached chicken breast”???

We were both pissed, me on his behalf and because I’d suggested the place, and Orzo, well, wouldn’t YOU be pissed at paying $8 for this garbage?! 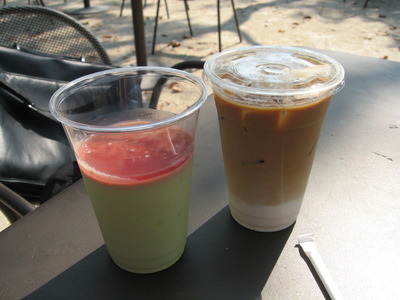 The pistachio panna cotta had a drizzling layer of strawberry puree over it, which complemented the creamy panna cotta itself very nicely. I hate to say it, but this was actually quite yummy and I had no major complaints over it.

The latte, however, was absolutely nothing special and I was more than disgusted as I watched the guy make the lattes (we both ordered one). Why? Because though I can’t put into words all the steps to making gourmet coffee, I do know this: the part where you put the little cup to receive the freshly ground coffee and then “pull” the shot, afterwards, you’re meant to empty the damn thing into the garbage can. You don’t reuse those grinds! Worse, he didn’t just re-use the grinds to pull another shot; he dumped out those used grinds back into the grinder! IT WAS SO GROSS, I almost gagged.

I have to admit, sitting at a table while looking out over the harbor, you can’t really beat that view. I love my city and all its flaws, but this is one flaw I will definitely avoid and tell everyone I know to avoid as well. Complete rip off… except maybe the panna cotta but even that, I’d rather perhaps have it be a bit cheaper and a bit smaller since that was way too much custard to eat after a meal.

Yvo says: Do yourselves a favor and avoid this like the plague it really is. I am still disgusted by the sandwiches, the re-using the coffee grinds (there’s environmentally friendly and there’s just why did I pay $4 for a cup of coffee that isn’t as strong as it should be?), and the whole affair burns bitterly in my mind. Gross, gross, gross.
absolutely NOT recommended- do NOT “pic-nick”