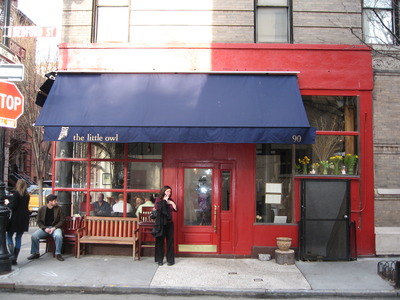 BB’s pick for FC last month was the little owl.  Unfortunately, we hadn’t realized how small the place was or how hard it is to get reservations, so we snagged reservations for this month instead… at 5:15 pm.  This presented a problem as most of us get out of work much later than that… and I was stuck by a last minute mini-project so I arrived uncharacteristically 35 minutes late (I’m usually only 10 or 15 minutes late!).  In any case, the waitress, I was told, was extremely hospitable towards my friends while they waited.  Many trendy places will not seat you until your entire party is there, and for lateness such as my own, a few places will even give up your table and send you back to the end of the line.  Particularly surprising is because the restaurant is so small, but they did not rush us, nor did they snottily inform us that we were wasting their time because they wanted another turn around the tables… none of that.  Instead, we were pleasantly allowed to enjoy until we requested the check. 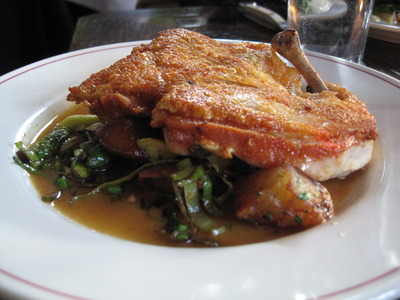 I tried a bite of the chicken and was pleased to find that the skin was crisped nicely (BRICKED CHICKEN, maybe?!) but still juicy.  I found the meat without the skin, however, a bit dry, and I was disappointed a bit to find the taste extremely similar to that very popular and traditional Chinese dish (basically fried chicken, Chinese style).  I know my companions enjoyed this dish though, but I am also biased because I tend to dislike white meat. 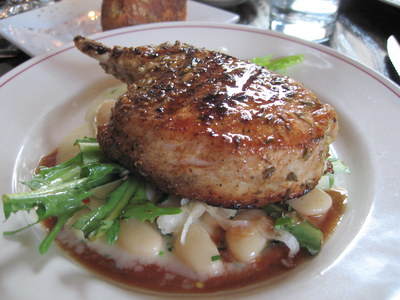 If you think my porkchop (pictured) is huge, BB’s was twice as thick.  I kid you not.  The pork chop was well seasoned (I got a bit of fennel stuck in my teeth, which was uncomfortable, but it came out with another bite of pork) and the edges were fatty but delicious and juicy.  I found the center a bit dry for my taste, so I dipped it liberally in the juices on the bottom of the plate.  The beans and the dandelion greens were also yummy.  So while I liked the pork chop, I thought it could have been better- perhaps a little less cooked at that point.

For dessert, we opted to share the raspberry beignets with warm nutella, again after having read good reviews on MenuPages.  When I told the waitress this, she exclaimed “Perfect!”  After it arrived, it was clear that she thought it was perfect because there were four beignets, which I found to be a really generous serving. 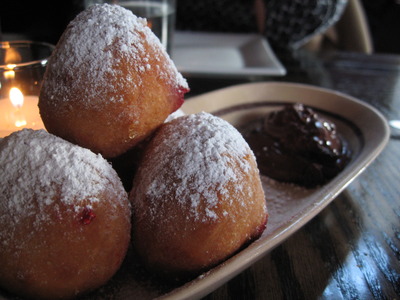 (The fourth one is hiding in the background.)  While we all enjoyed these tremendously, I did find that eating these without any raspberry or nutella accompaniment was unwise, as the fried dough was very dense, not quite like the best beignets I’ve ever had (Cafe du Monde in New Orleans holds this title).  Afterwards, walking to our next destination, I could feel the beignet sitting in my stomach like a rock.

Overall, I enjoyed the food, and was pleased that despite the hype, the restaurant is actually above average in terms of food, and the waitstaff very friendly and accomodating.  I would definitely go back.  One thing to note is that though they are listed as a “Mediterranean” restaurant, we decided that it is really an Italian place trying to avoid the stigma of “Italian means pasta!”  (There are no pasta entrees on the menu.)  For this, we do not blame them, though the dishes are distinctly Italian in nature.  Buon Appetito!  (Did I spell it wrong?)

Yvo says:  This is a great place for a casual dinner with friends, the food is solidly enjoyable and the atmosphere is welcoming.  I will definitely be going back (if I can get reservations).  Prices were reasonable- dessert was $7 for the four beignets and my dish was $22.  My share was $30 total (I drank water).  As always, HAPPY EATING!!!
recommended