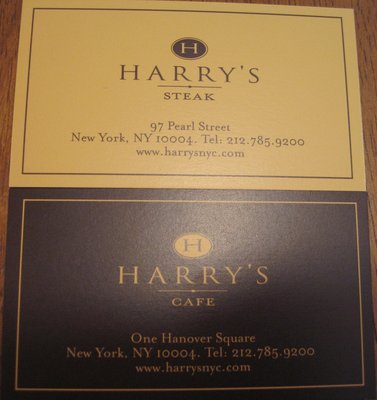 Harry’s first caught my interest a few months ago, when it was mentioned in UrbanDaddy for its Kobe beef hot dog.  A typographical error stated that it was $4.50, which would be an excellent deal, but upon closer inspection of Harry’s website and menu, it turned out to be $14.50, so I put off going just yet (who pays $14.50 for a hot dog?  Someone on an expense account, someone who really likes hot dogs, but not I). 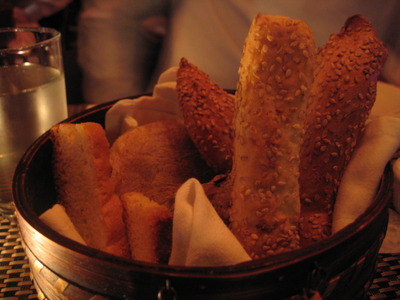 Harry’s made its way back onto my radar when the New York Times reviewed it*; then the stars aligned and Downtown for Dinner was starting, with Harry’s on its list.  I was game, B was game, so this past Tuesday we made our way down the street to Harry’s Cafe. 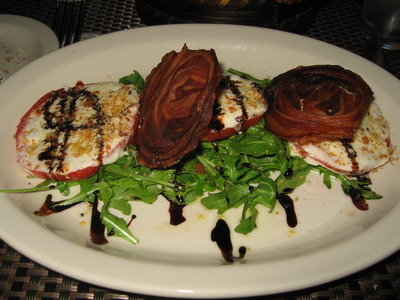 Of course B opted for the warm mozzarealla & tomato salad, which, to his surprise and I suppose delight came topped with rings of bacon (I suggested it might be prosciutto, since that’s usually round, but he insisted it was bacon).  The tomatoes were hearty, thick slices that were warmed through, to my disgust.  But B seemed to enjoy the mozzarella with the bacon (he doesn’t like eating it with tomatoes, though that’s generally how it’s served).  He ignored the greens on the bottom but seemed pleased overall. 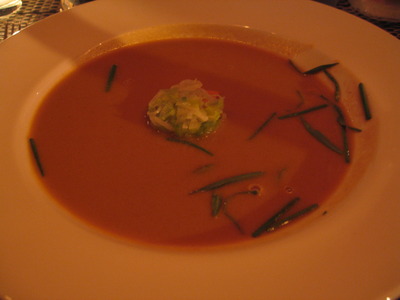 My shrimp bisque arrived in a large bowl with a small mound of cabbage greens in the center and garlic chives (I think?) scattered over the top.  The garlic chives did not mesh well for me; I was horrified at their strong taste when I took a sip of soup with one in it.  Other than that, the shrimp bisque was lacking overall: there were a few petite shrimp hanging around (I think 4 or 5, if I counted right?) which added nothing to the flavor; the cabbage mound was good, adding another dimension and a little contrasting texture to the bisque itself, but there was no distinct flavor to it.  I realize bisque is not my favorite type of soup- I much prefer thick, hearty chowders to blended smooth bisques, but I’ve had plenty of bisques that stand up better than this one.  Pass on this dish. 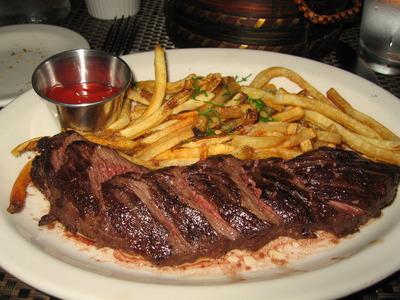 Another no-brainer for B was to order the steak; I must say that though this cut of steak isn’t known for its tenderness, they did a good job of hiding this fact.  Though the steak arrived sliced, something I generally do not prefer as I feel the steak loses something when you cut it in the kitchen, the steak itself was soft, tender, and flavorful, two of those being things not easy to achieve with hangar steak.  They did an excellent job of hiding just how fatty this cut generally is, as well.  The fries, however, were not up to par, but I suppose passable- though B noted that something they put on the fries burned on his tongue unpleasantly. 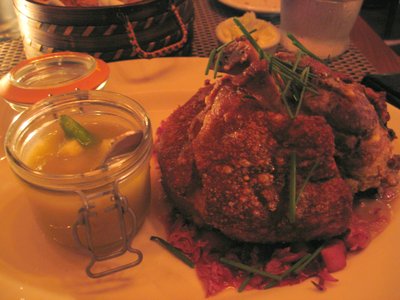 After hearing about this dish in the NYT review and mis-remembering that it had been enjoyed, I decided hey, it was a Harry’s Original, I should try it at least once, right?  When it arrived, a monstrous… thing… in front of me, I stared stupidly while trying to figure out how best to attack, I mean, consume it.  This proved a fruitless and futile task, so I finally began pulling pieces of the skin off with my knife and fork.  The skin was crisp, almost sickeningly so, as I scraped fat away from the skin and munched a little on it.  But it proved too oily for me to enjoy for long, so I bravely began poking around to get some of the inside meat, hoping it was juicy, succulent, which it looked it might be.  (And there are those damn garlic chives again!  Were they on sale last week or something?  Get rid of them!)  Did I mention that the whole monstrosity sat atop what looked to be a very pink bed of cabbage, bacon?, and something that lent it a fruity flavor but was indistinct enough for me to make out?  The applesauce jar was a cute touch, and clearly contained a serrano pepper, but when I tentatively tasted it- I’m no fan of a in-your-face heat- I tasted nothing but a blandly smooth applesauce, with a few small chunks of apple scattered throughout while the serrano pepper floated serenely.  I wound up not eating much, if any at all, of the damn shank, finding it too hard to eat without making a mess all over my lap.  I requested it be packed up, so that I might try to enjoy it more later, and indicated clearly that I’d also like the applesauce to be packed in with it.

When I got home, no applesauce, and the pork shank is still sitting in my fridge (to be disposed of soon).  Ah well.

For dessert, as our server had told me that an ambre was… something.  With … like… hmm… Basically, he didn’t know.  I’m disappointed that Harry’s didn’t train their servers a little better on their menu.  It’s a small oversight, I suppose, but coupled with a number of other small oversights, the service was attentive but uninformed.  Not the best combination, though much better than inattentive and well informed… 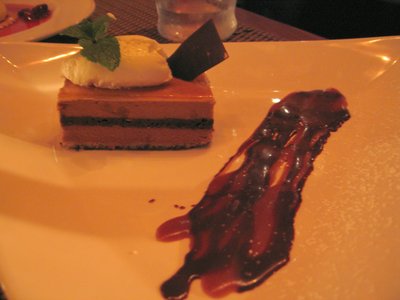 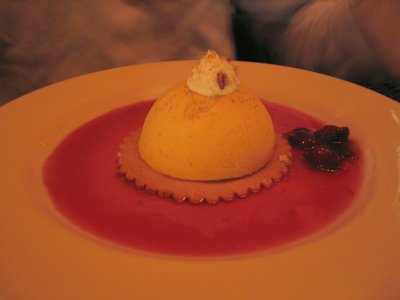 Much to my dismay, there were pistachios in the center of the ambre.  I’m fairly allergic (though not deathly, I assure you) to nuts, so I was disgruntled to discover this after eating it.  I ate around the center portion, but the rest of it was boring, bland and unimaginative again.  Was it pumpkin flavored?  It was just… not good.  I’ve searched briefly on the internet to figure out what an ambre is meant to be, but have only come up with (during a brief search) dessert wines.

Overall, Harry’s was a huge disappointment.  After receiving what I consider a very generous one-star from Frank Bruni, I expected a lot more than a below-meidocre meal in a very run of the mill steakhouse-appointed restaurant.  A few things I’d like to point out: the restaurant is below street level, so whenever a car turned the corner, their headlights pointed straight into the restaurant, giving the dining room a disorienting disco-feel to it; the lights also pointed straight into my dining companion’s eyes, as he faced the windows.  Also, Harry’s is, apparently, directly over train tracks, because every few minutes (we dined during the latter part of rush hour), we would feel a disruptive rumbling as a train passed below us, and our water glasses would rattle.

Yvo says:  What a huge letdown.  After the meal, I was still just lukewarm towards the restaurant and my meal; looking back over my mental notes and the pictures, however, I realize just how much I didn’t like this place.  From the tired, trying-too-hard decor to the less than mediocre food, I couldn’t possibly recommend this place to anyone.  Even the drinks were outrageously priced: $10.50 for a malnourished glass of Rioja?  No thanks.  I suggest those in the area go to other places; Delmonico’s is less than a block away, as is Fraunces Tavern… there are plenty of places around here to go if you want good food, so there is no reason to waste time or money at this one.
not recommended

*This is basically why I do not read many publication’s restaurant reviews and instead stick to blogger reviews.