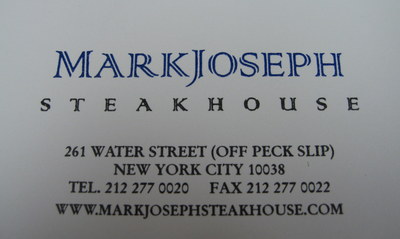 This place first made it on my radar about a year ago when I read about it here– the Canadian bacon slabs were just too drool worthy for me to pass up.  I was also keen on the location- it’s very close to not just where I work, but where I now live, so it was definitely a must try.  In fact, it made the list for The Great Steakhouse Tour of NYC, but when I found out about this Downtown for Dinner thing- a three course meal at some of the fine dining establishments down here, all for $30 (beverages, tax & tip excluded), and that MJ was participating, I jumped on it.

As I’ve mentioned before, I find that a lot of these prix fixe dinner deals really aren’t deals.  Either the restaurant skimps out on food, or serves you mediocre stuff (which is so stupid, because the idea, for me anyway, is to try a restaurant for less money, and then if it’s good, go back and pay the full price; however, I understand that back in the days of college, I would try places because it was inexpensive, and even when it was good, I couldn’t afford to go back and pay full price), and sometimes they even treat you poorly because you’re not paying full price.  Either way, I was convinced I should try MJ at this discounted price during this week.  (I will be attempting to hit other places during this week as well, but unfortunately, I will be away on business for three of the days it is being offered.  Another bonus point in their favor: the deal is running through Sunday, while Restaurant Week and similar deals usually only run Monday through Friday.)

And so, I rounded up two of my coworkers who were down to try a new place, and off we went.  It was a rainy walk to the restaurant, but good conversation trumps an umbrella anyday!  Right?  Well, most days.

When we arrived, the hostess was polite enough though we had no reservations, and we were seated right away.  The ambiance was very male-driven, but- and perhaps this is due to the promotion going on- there were a fair number of females in the restaurant, seemingly large groups of coworkers all around.  The table next to us was extremely loud, making it hard to hear each other sometimes, but they got up and left soon enough.  But now, on to what’s really important: the food.

The waiter was a standard steakhouse staffer- brusque, without being rude, and efficient.  He didn’t seem upset when we said we were ordering from the prix fixe menu; they did not offer it printed out, but instead he listed it: appetizers, our choice of baked clams, Caesar salad, or a slice of bacon; for our entree, choice of salmon or filet mignon; dessert, ice cream or cheesecake.  All three of us agreed that it was against our beliefs to order seafood at steakhouses (though I hear some of them have quite lovely seafood dishes, if I go to a steakhouse, it’s because I want steak), and so we placed our orders. 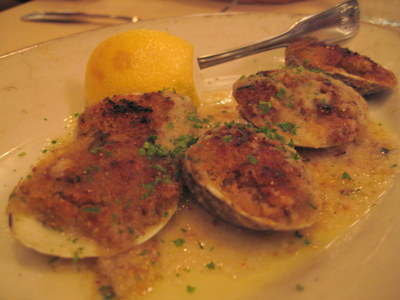 baked clams – these were fairly standard, but yummy nonetheless.  clams were fresh. 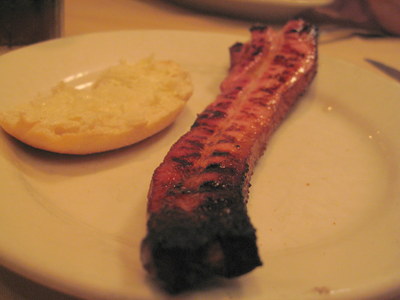 Canadian bacon slice – I was disappointed to discover it was Canadian bacon, instead of the traditional smoked/salt cured bacon we’re used to.  However, this was interesting to try, tasty to say the least, though I don’t think I would order it again.  It felt a little weird to be eating this large slab of meat that they brought over on a platter, then plopped onto my bread plate (hence the bread in the picture).

As for our entrees… 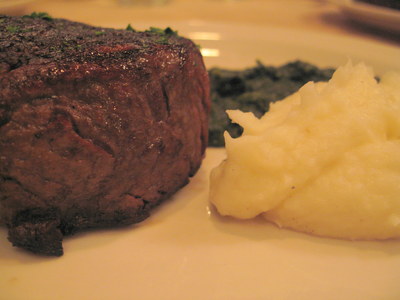 I was extremely happy to see that the steak was not undersized by any means.  It was also cooked perfectly to our specifications (we all ordered medium rare), and the meat was so tender, it melted in my mouth.  The creamed spinach was a bit lacking, too mushy/liquefied for my tastes, though the mashed potatoes were on key, creamed to a fluffy texture and well seasoned.

However… the steak… which I genuinely cannot complain about the cut of meat; after all, it is one of the softest and least fatty cuts.  But this nice, expensive cut of steak has little to no genuine flavor of its own, and deserves to be seasoned accordingly.  I found myself using the house steak sauce, something I rarely, if ever, do.  The steak sauce was a cherry red color, brighter than most steak sauces I’ve seen- it reminded me almost of the sweet&sour sauce on Chinese takeout items- and it actually tasted a bit sweet, a bit sour.  I enjoyed it, though I was a bit disgruntled that in order to to fully appreciate the steak, I needed to douse it in the bright red steak sauce.

And finally, last and pretty much least, the desserts: 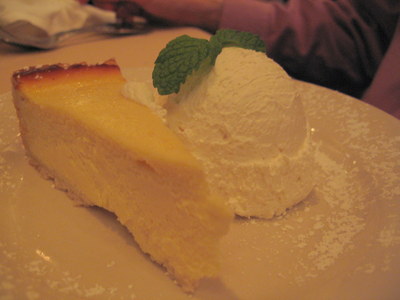 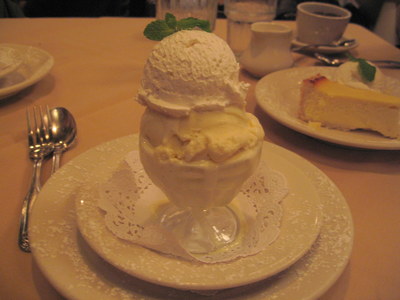 My coworker, Polenta, really liked his cheesecake and insisted on my trying a bite.  It was cheesecake.  I don’t like cheesecake in general and this one was not the one to convince me otherwise.  It tasted like very plain, very normal cheesecake, though I emphasize that he seemed to really enjoy it but was too stuffed to finish it in the end.

Yvo says: I was impressed because the meal was definitely worth the $40 (incl. tax & tip) that I spent.  The filet itself did not seem to be particularly small, and the price on their menu for the petite filet mignon is $39 while the regular is $51.  If you can’t manage to get down there for this special, well, the food was definitely worth it, although I note that the appetizers seem to be priced cheaply while the main courses are a bit pricier.  The service was great, with no distinct “ew, they’re ordering from the cheapie menu” that you might get at some fancy places.  Overall, I was satisfied with my entire experience.
recommended