I’ve been a little quiet here because I’ve been so busy planning my daughter’s first birthday. We hadn’t intended to go all out for it, but once we started brainstorming — let’s just say that one of the questions we had was, “How do we arrange a petting zoo?” (We didn’t. I promise.)

For so many years, I’ve heard people pshaw the idea of a first birthday party as “it’s just for the parents anyway, the kid won’t remember it.” Well, no, perhaps she won’t remember it per se – except through pictures – but we could throw a party that she would enjoy, no? Also, what’s wrong with it being for the parents? We DID just manage to keep a human creature intent on offing itself alive FOR A WHOLE YEAR. It’s reason to celebrate!

Now that it’s passed and I’ve learned a few valuable lessons, I thought I’d show off my hard work and maybe share my lessons-learned at the bottom. Maybe. I’m still a little scarred… 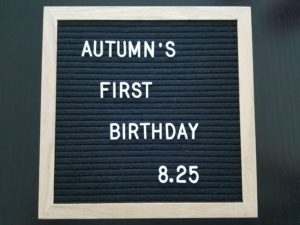 My cool felt letterboard that I’ve been obsessively using. It makes me feel like a legit Instagram-person, haha. 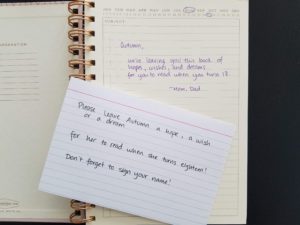 I had a notebook out with a card that read “Please leave Autumn a hope, a wish or a dream
for her to read when she turns 18!” I got the idea from one of the other moms and I’m happy to say that I was able to make sure almost everyone there signed it! 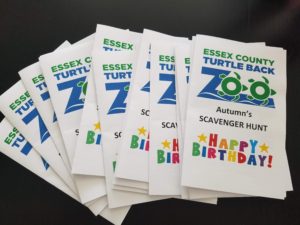 The party itself was in one of the classrooms at Turtle Back Zoo. We chose a classroom partially because it was indoors/air conditioned (all of the other locations were outdoors and late August tends to mean overwhelmingly hot/humid weather), but also partially because we wanted to have an educator come and show us some animals! Unfortunately a scheduling snafu meant that they were all booked, so instead the Zoo created a scavenger hunt for Autumn’s guests. It was super cute and not extremely hard but not extremely easy – I think given that mostly the adults were going to be the ones figuring out the riddles, they chose a mid-level range of clues (all of the kid guests were around 1, and a 4 year old). 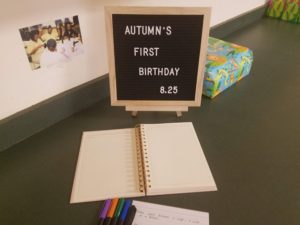 The entrance to our party! 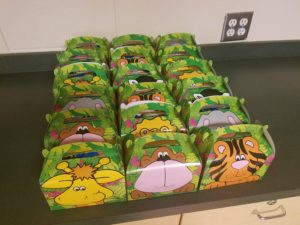 Goodie boxes – what’s inside? Zoo animal crackers (purposely chosen because the packaging said “zoo” on it), a stuffed animal that matches the outside of the box, and bubbles. 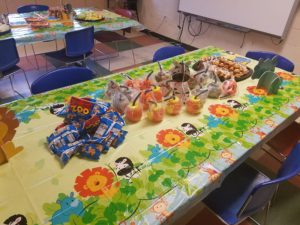 We also had zoo animal straw cups (wrapped in plastic in the above pic) that I encouraged everyone to take for themselves and their kids. 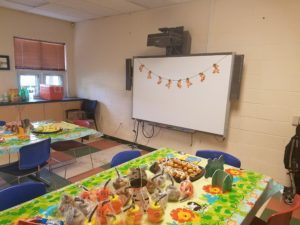 Another angle of the classroom setup. 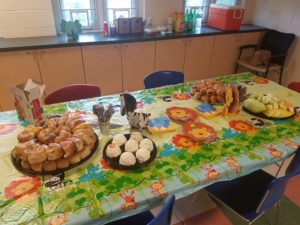 Bagels, cream cheese/butter, fruit, croissant sandwiches, pastries on the other table, coffee, OJ, water, and milk boxes in the cooler… 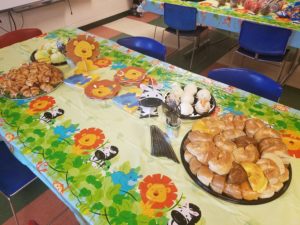 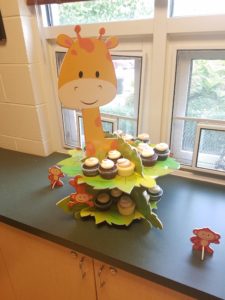 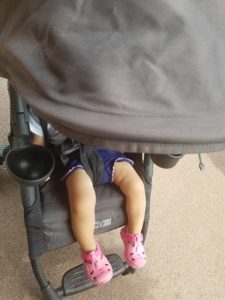 After the party was over, we walked around the Zoo a little with Autumn showing her all the animals. She LOVES animals — she had SUCH A GREAT TIME at the Dublin Zoo — which is why we chose this as the venue. She had an amazing time at her party and at the Zoo – the photos are all on my brother’s camera so I have to grab some to upload, but the animals were mostly out in full force and showing off. There was a condor who was just chilling with his wings wide open so we could see his full wingspan! Our theory was that it was hot so he was cooling off by opening them up. Amazing. 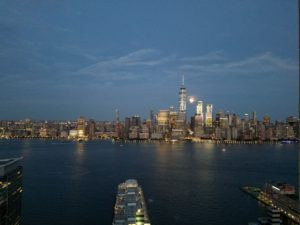 When the day was over, I took this pic of the gorgeous moon. We survived a full year of parenthood! More of my thoughts on that here.

The Zoo was a lovely location for her first birthday, given that she loves animals so much. The classroom was large enough to fit us all comfortably and had plenty of space for our decorations and food, though I’m still a little disappointed we couldn’t bring alcohol in for mimosas. Our party was from 10:30-12:30p, thus the brunch/breakfast slant to the food we served, but it was perfectly suited between naptimes for most of the babies. We had a bit of a headache when we got there and were given the runaround for where exactly our party was, BUT that was likely also because I wasn’t fully familiar with our venue — so that was lesson learned #1.

For our food, I had the bulk of it catered from a local bagel place, Wonder Bagels. It’s where everyone locally goes for bagels for a number of reasons and is very popular. I ordered the bagels/cream cheese/coffee/fruit platter from them, and while I was pleased with the end result, they are the reason I was about to lose my mind that morning. They were meant to deliver at 8:30am (to our building so we would have time to drive everything over to the Zoo and set up), but at 8:45am no one had showed so I started calling them. And calling them. No one ever picks up the phone! When I finally got through, the guy on the other end told me repeatedly they didn’t have a catering order for me. I was panicked and the guy told me to go down with my receipt, which I couldn’t find, but 10 minutes into things as I’m packing up the car trying not to cry or scream planning on driving there and just buying all their bagels (and leaving the fighting over what I’d already paid after the party), he called me back and had miraculously found the order. He said he would have it ready in 10 minutes so we finished packing up and drove over there. He made it right and refunded our delivery fee without me having to even mention it, and was super apologetic — but as my husband reminds me, he was fixing a mistake that shouldn’t have happened in the first place. Regardless, I was happy with the order — the super cute scoops of spreads, the bagels cut into 1/4s, the fruit — all of it was great and people were pleased.

I over-ordered though! Still so many bagels in the freezer.

The sandwiches and breakfast pastries were from BJs, which is where I thought would lose my order before Wonder Bagel! But they did a great job and those were also fawned over and people liked them, so phew! And super inexpensive — the pastry platter was huge and $15, while the sandwiches were $30 and still pretty good. I wish they’d given us mustard but my brother just added cream cheese to them and it was perfect.

The cupcakes were also from a local place, Cocoa Bakery – I think they also did a great job. Super pretty and cute and tasty. Another pleasant experience.

Finally! since I know people will ask — all of the zoo decorations (cups, plates, napkins, tablecloths, goodie boxes and contents [minus the cookies], EVERYTHING ZOO THEMED) came from Oriental Trading. I don’t think it was ‘cheap’ but it wasn’t expensive either, and they have their sections listed by theme. I easily went to the Zoo-Theme page, entered my quantities, and was able to see at a glance – before adding to my cart – how much money I was spending in case I had a budget.

(Also, I have a whole box of the stuff that we didn’t use – and the gently used banners – so if anyone’s looking to take a box of stuff, and a whole case of bags of Zoo Animal Crackers – $30 OBO!)

Phew. That was a lot. Any questions? I’m sure I’m missing stuff as I’m banging this post out in the AM because someone didn’t nap yesterday…

{If anyone wants ideas for what gifts to get a 1 year old, here is her wishlist – a decent round of her interests (animals) that are appropriate for her age, and some stuff for when she’s a teeny bit older — with so many generous friends and family, I don’t open everything for her at once. This way, with stuff for her next few developmental stages, she can have new stuff along the way instead of a ton of stuff for her exact level right now!}

HOW DID/WILL YOU CELEBRATE YOUR LITTLE ONE’S FIRST BIRTHDAY? Any lessons to share?