Buddy Who’s is a relatively new addition to the area – they opened early this year in a great corner space across from the post office. There is a step up in the main entrance, but a ramp along the back/side that you can use to enter with your stroller (or wheelchair or luggage). 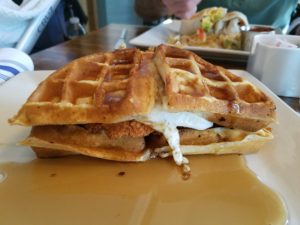 The day after we returned from our most recent trip to Europe, we were awake far too early on a weekday for either of our tastes. We decided to walk the few blocks to Buddy Who’s, one of the few sit-down restaurants in the area that was open for breakfast on a weekday. It happened to be national fried chicken day, so I ordered the chicken & waffles, not realizing that it was a chicken cutlet already in sandwich form and not fried chicken in the traditional sense. I used a knife and fork to eat this (not my preference for sandwiches) but found it tasty enough. I would not go out of my way for this and I doubt I’ll order it again, but it’s nice to have it on the menu… 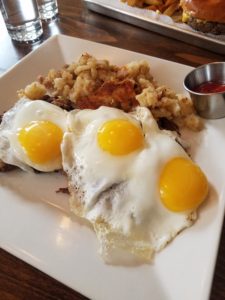 Another time Hubba Hubby and I were there for brunch, I ordered the short rib hash and liked it. I like hash (corned beef hash is a frequent choice of mine at diners), and this was good hash. Super filling with 3 eggs!

Hubba Hubby ordered a burger that time and liked it well enough. You can see his fries in the back — we’ll get to those. 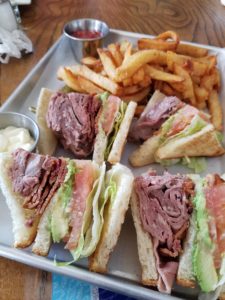 Another time I went — the roast beef triple decker sandwich. Actually, this was my first time there — and I liked it enough to go back the next day with Hubba Hubby. It’s not amazing, but it’s solidly good classic American diner fare. I happen to really like American diner fare (I grew up in Queens; this is in Jersey; both of these places hold dear in their hearts the dining establishments known as ‘diners’) — it satisfies this comfort part of my heart that can be hard to reach sometimes. And the fries? The fries are really good, if you like pommes frites; thick but not quite steak fry thick, crisply fried and the innards perfectly potato-y… these are good. Not my personal favorite, but I’ve heard them called ‘the best fries in all of Jersey City’ by others, so clearly they are well-liked. 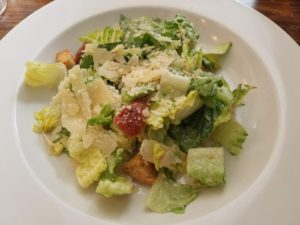 And though this promotion is over, it behooves me to tell you about their Restaurant Week menu. (I can go on and on about NYC Restaurant Week and how it’s not a great deal and how it’s awful and BLAH, BLAH, BLAH — but you’ve read all of that on another blog or maybe even this blog in the past, and I’m trying not to be so negative plus this was just a nice lunch with a fellow mama, not a time to bash on the concept.) $12 for a starter (choice of Caesar salad or a soup that I’m forgetting; it’s been 80+ degrees for weeks now so I’m sure the soup was a non-starter for me), which as you can see above was pretty big, and your choice of either a burger or… 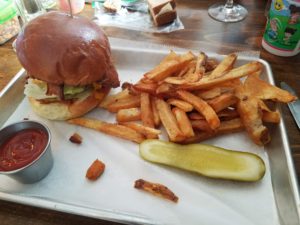 the Double Cluck (two pieces of chicken schnitzel, spicy sauce, sandwich). Comes with fries and a pickle. The sandwich itself is $12 on the menu, so I assumed they might make it smaller somehow to recoup their money, but nope! Standard size with a pile of fries on the side. 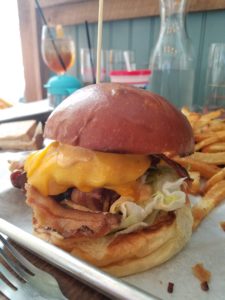 And this sandwich? It was good. This was definitely in the realm of ‘more interesting’ offerings on their menu — of which there is no shortage (more on that in a minute)! I almost couldn’t finish it, but in the last minutes of my stomach-space, I shoveled it down and enjoyed that moment of regret where you’re thrilled you ate something so darn tasty, but you know you’re going to pay for it later. It’s okay. It was worth it. I would absolutely order this again and look forward to doing so at some point… 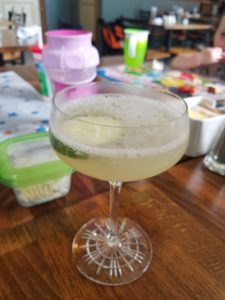 Ignore all the kids’ stuff in the background for a moment, let’s talk about their drink menu! This is the Gini Hendrix, a gin and cucumber cocktail that screamed my name when I sat down. I liked it a lot and definitely want to explore more of their interesting and well-curated cocktail menu.

A lot of notes to add: I really like Buddy Who’s being in our neighborhood. It has a menu that’s a great mix of tried-and-true diner classics that, as you can see, I tend to stick to ordering from that side of the menu. However, they also have a bunch of menu items that are more creative and interesting that I’ve shied away from and I guess I really should give a go: cereal pancakes, anyone?

Have you tried their cereal pancakes? Do I need to get them if only for the Insta?

{the new section of family-friendly ratings!}

Stroller-friendly? YES. There’s a ramp to the left of the main entrance; sometimes the door at the top is locked but you can always ask someone to unlock it for you and they will open it for you.

High chairs? They have high chairs for when you sit at a regular table, but I do not think they have the high chairs that reach bar tables (not a lot of places have these though). They are very happy to help you sit at a table that will fit you and your stroller next to it though!

Changing tables? NO! At least not in the bathroom on the right (there are two single-person bathrooms; if memory serves I’ve only been in the one on the right for some reason). There is a flat surface in there that you could probably change your child in if s/he isn’t very wiggly or doesn’t fight diaper changes with the force of a thousand suns like mine does (and most mamas I talk to as well), but I haven’t tried that here.

Overall family friendly rating? Very. The staff is friendly and welcoming; the owner has come out to say hello on multiple occasions and talk to us when we’re there. I first went when the owner worked with a local mom who organized a meetup group centered around brunching with babies, and I know he is very aware and keen on having his place be known as a family friendly establishment. I haven’t been when it’s super duper packed, but I hope they stick around for a long time to come!

Oh, also — the most recent time I went (a few weeks ago) was with another mom and her 15 month old. As soon as we were seated, the server brought over super cute plastic cups with lids and straws; inside was water for the bubs. While both of us carry our children’s own cups in the stroller, I thought this was a nice and thoughtful touch — and definitely occupied the kids for a bit while we looked at the menus. It was A’s first go with a straw cup and she seemed to like it quite a bit!