As most of my long-time readers know, I’m a pretty avid traveler and it’s only gone up since meeting Hubba Hubby. (Sadly, I haven’t documented here our trips to DC [July 2016], SF/Napa [Sept 2016], Hawaii [Sept 2016], Milan [Nov 2016], London/Paris/Geneva [June/July 2017], Munich/Bern/Zurich/Budapest/Vienna [Jan 2018], … wow typing that all out, I’m really not going to catch up AM I?!) Uh, anyway, traveling with a baby brings with it some really eye-opening experiences. It’s not really a bad thing – just that you learn very quickly that you were once blind to all the moving pieces to travel with a baby, and start to understand why some things are the way they are (and why they aren’t another way).

ANYWAY, all that to say that on our most recent trip – Dublin and London – two places stood out to me as particularly accommodating to mothers traveling with infants, and I need to point them out. First: the Dublin Zoo. 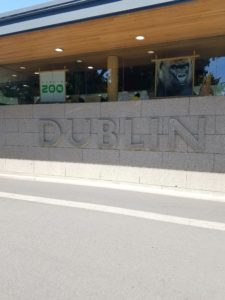 It turns out that our child absolutely ADORES ANIMALS of all kinds. This was a week before she began walking, but this was no problem. 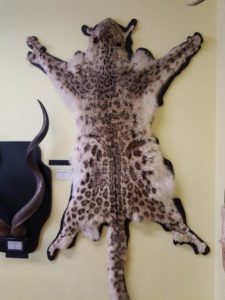 We first stopped at the visitor center, which was decorated with all manner of animal hides, heads, etc. on display and had signs encouraging visitors to touch (gently). We took A around to each one and had her pet them “gentle hands” – something we’re trying to instill in her when she encounters living creatures of all kinds. There was a volunteer on hand who was super knowledgeable and discussed elephants (one of A’s favorites) with us at length. There was an elephant skull on display, cut in half and truly fascinating. I had no idea how intelligent and wonderful these creatures are.

The entire zoo wasn’t super large, but had a lot of small/cozy areas where one could get very close to animals. In this section, there were a lot of ‘farm’ type animals – and peacocks, including this one that kept walking around and literally peacocking. I didn’t manage to catch a good shot of him, but he was quite lovely. There was pigs and piglets behind him, and nearby a sheep kept bleating loudly (and scared A!), but it was a nice area for the younger kids to explore. 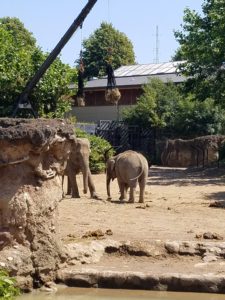 There were a lot of bigger enclosures with the large animals like the elephants here. We watched them for a bit but it was harder for her to see as you can imagine because they were a bit away.

One of the nice things about this zoo is that though it had a good range of animals, it wasn’t so big that we couldn’t cover most animals that we wanted to see. It was a pretty good size with plenty to see and kept A very interested with all of their exhibits. She had a blast looking at all the animals. 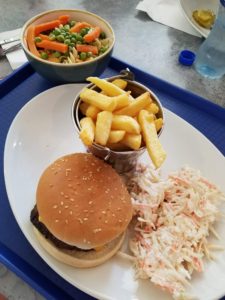 When we stopped to grab a bite, Hubba Hubby and I just got burgers and ‘chips’ to keep the hangry away. They had plain pasta as an option and while I’m generally happy to feed A whatever we’re eating, I wanted something more substantial than bits of my bread or burger. She actually wound up eating a lot of the pasta and veggies that I asked them to add to the pasta — and I packed up the rest to go, which she snacked on very casually from her stroller cup while we walked back to the hotel. She was such a good sport about being in her stroller (though I suspect boredom of being in it is what propelled her to learn how to walk so quickly!), I was so proud of her.

I don’t seem to have the picture here but the cafe where we dined, Meerkat Cafe, actually had windows all along one side where there were meerkats running around cheekily making faces and waving at patrons. We went over when we were done eating and A couldn’t stop laughing at the little scamps running around. A nice touch!

And directly outside the cafe was a little house with two doors, one marked with the above sign… 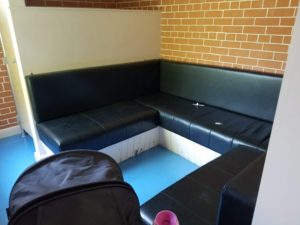 inside was a wide bench with plenty of space for mothers to sit and breastfeed their babies. I’m sure you could bottlefeed as well, though I’m not sure if a man would be welcome in there (just a guess? I don’t know how comfortable a breastfeeding mom would be with a man in there bottlefeeding his baby, but I know in our American culture that would likely be frowned upon). Funny enough, I didn’t realize this was here until we were getting ready to leave, so I’d already breastfed her elsewhere in the zoo. I don’t think anyone even blinked, though if I’d known about this facility I’d likely have used it — it looks more comfy than the bench I found outside the duck pond! 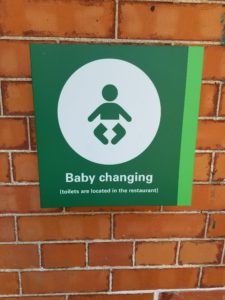 Right next to the baby feeding door was this sign — 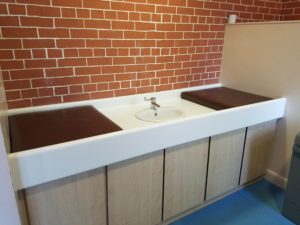 and inside was this super plush area to change your baby, complete with a sink to wash your hands and 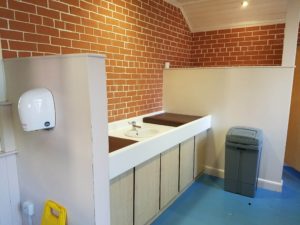 a dedicated pail for diapers. Both areas also had a toilet stall inside though the signs both imply that this is just for feeding and just for changing, but I appreciated having the option of myself using the facilities once I’ve taken care of baby. I can’t emphasize enough how many times I’ve found myself at a loss as to how to take care of her needs, my needs, and not have to run 6 different places and take 3 elevators before all is said and done.

Overall — I really loved the Dublin Zoo for so many reasons, but not least of all for their providing such great facilities to take care of my baby. Everyone in Dublin was super lovely and accommodating as it was (they really do love babies there) — I can’t recommend the city enough for traveling with baby — but the Zoo really stood out to me as completely set up for our littlest humans to enjoy.