On what I believe was my final date with the previously mentioned Butcher, he took me to a place in Brooklyn called The Bounty. (See? I go to Brooklyn!) 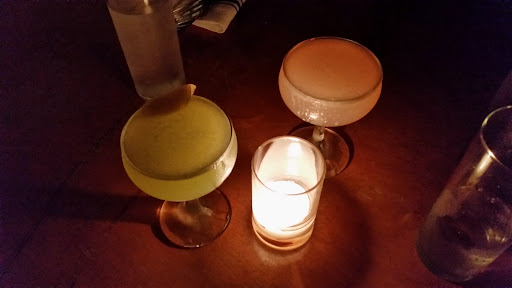 We started off with a couple of drinks. Mine was strong and delicious; based on the menu, it was probably the Pixie because that’s an adorable name and it contains many things I like (cucumber, elderflower, gin…). He liked his drink too. 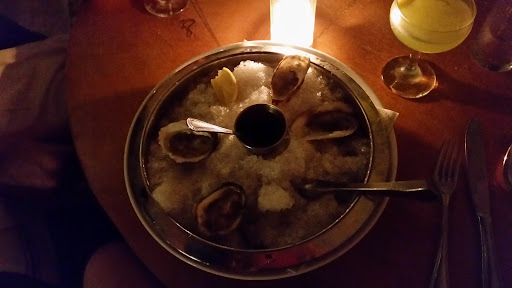 We tried the oysters available, which were fresh and tasty. They have a rotating selection available and a $1 oyster happy hour from 5-7 p. 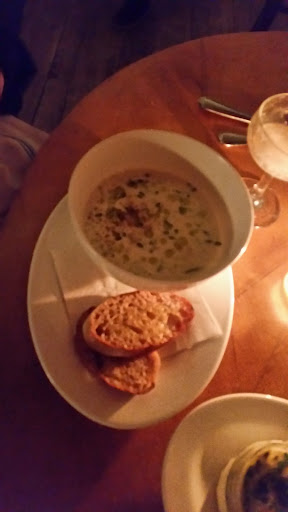 Despite the hot weather, we opted for soup (we shared everything) – a delicious chowder that both of us thoroughly enjoyed. We may have had a moment of arguing over who got the last spoonful. 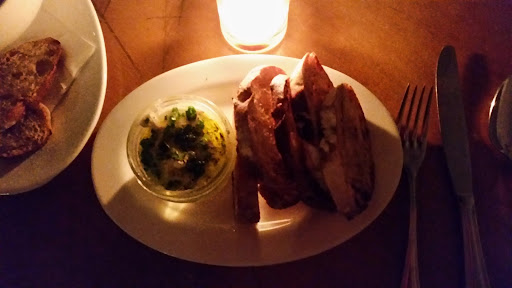 Ugh, dimly lit restaurants are my bane ever since I stopped carrying my larger camera… but this dish, despite looking like nothing but a glass jar next to a bunch of slices of house made baguette, was incredible. Whipped ricotta – such a simple concept, and done so well here! – with lemon zest, sea salt and chives. It was a generous portion; spread on top of the perfect bread, it was heaven. I could happily eat this for a meal – so freaking good. Though they make their own ricotta, I wonder if I can do this with ricotta at home… The answer is yes, because I’ve definitely put out ricotta whipped with lemon zest and bread for guests, and it’s disappeared in an instant. 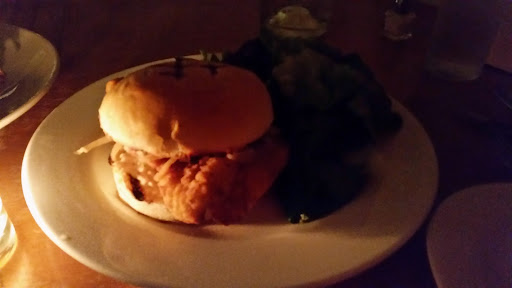 Don’t tell anyone, but I may be illiterate: I was surprised this was a sandwich. Fried catfish; I may have not been paying attention (I think it was listed in a section by itself? I don’t know), but I gamely picked it up and actually really enjoyed both the sandwich and the salad that came alongside it. The bread of the sandwich was soft enough to flatten a bit and take a bite, the catfish was fried really nicely, and there was enough tartar sauce to add some moisture to what could have been a very dry bite. I liked it a lot. 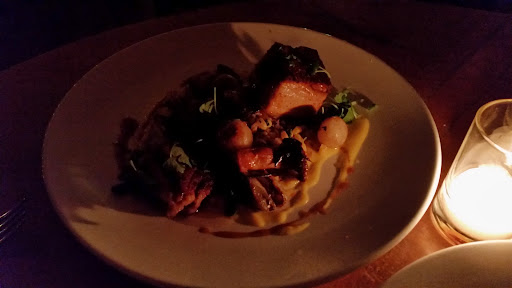 Our final poorly photographed dish was the pork belly, which I found extremely tasty, brilliantly cooked, and almost sticky in its deliciousness. I think Butcher, being the huge carnivore he is, enjoyed it more than I did, but neither of us had any complaints as we finished our meal.

We did not have dessert.

(Because I’m sure some people are curious, things didn’t immediately end but this was our last somewhat formal date. I think I saw him one more time after that. One of his complaints about me occurred at this meal: he said that I always expected him to go out of his way for me [despite the fact that we were in Brooklyn, in his neighborhood, near his apartment, and he chose the restaurant!], and cited the example that our table was extremely wide, so when we first sat down, we were very far apart. He asked that I move to join him on his side, but then I’d be sticking out into sort of the aisle. I declined, joked that he should move to my side, and then declined again. He moved to my side. I would have been fine if he’d stayed on his side. I got tired of him complaining about something I’d done after every single date – it was never on the spot, it was always hours or even a day or two after the occurrence that he’d grow silent/distant in our conversations and I’d have to pry it out of him, and it just got very frustrating. Not to say I’m perfect- he obviously found plenty of things to complain about me – but I was very tired of constantly being criticized. If I wanted to date someone who constantly criticized me, I’d have stayed with my first long term boyfriend.)