After a Mets game semi-recently, my “friend” and I headed over to the Forest Hills Station House, presumably thusnamed because of its proximity to the LIRR. Since my “friend” needed the LIRR to get home after dinner, I figured it’d be a great spot to check out, plus I’d heard the beer list was fairly impressive and he’s a home brewer and beer nerd blah blah blah

Obsessed with Brussels sprouts, yes I am still. Thick cut chunks of bacon, an expert char on the sprouts, all made for a good dish, but what took this to beyond the beyond: the judicious use of acid. There was a healthy glug of vinegar on these, which balanced out the richness of the bacon and the bitterness of the sprouts perfectly. I think Mitch was fairly impressed with the dish as well, as he kept saying “oh my god, this is so good!” 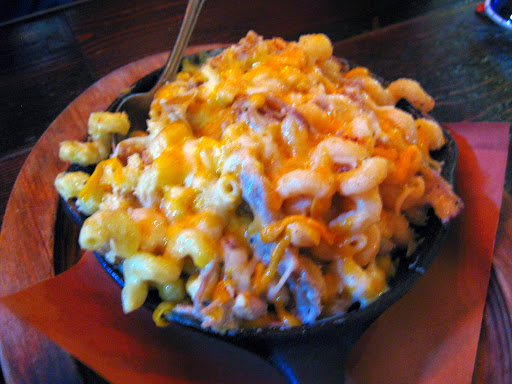 Mac & cheese with pulled pork; the pork is optional and you get to choose from bacon, chicken, maybe beef too I forget. I almost chose bacon but remembered the bacon in the sprouts. Good thing: this pulled pork was out of this world. Mitch and I used to work together in a BBQ restaurant; we’re more than familiar with it. But this was fantastic: not just moist, not just tender, but insanely smoky. Pulled pork is NOT hard to make. But it’s not exactly easy to have each piece completely infused with smoke! This was just awesome, and they didn’t try to get all fancy schmancy with the cheese and make it extra extra sharp or different. It was just the right blend of creamy and cheesy and just… good. The pasta? perfectly cooked. I was over the top thrilled with my choices.

Mitch, however, bless, wanted to order fish & chips as well. I try not to be too bossy so I didn’t tell him that it was unlikely the fish would be good, and when it came and sucked hard, I shrugged it off. The batter was intensely thick and not tasty; he called it a fish donut, and I agreed readily. (I am pretty sure I have used this description in the past. It is NOT a compliment.) The fries, however, were fried well and yum!

I should also mention the fantastic beer selection: I know I often say I don’t drink beer, but one of the beers I DO drink (which you’ll probably find odd as I know lots of people who don’t like this type) is IPAs. Something about them just does it for me, and I was extremely happy to see they were serving Single Cut Beer (a hyper-local brewer – ie, in my county! I just haven’t had time to get over there). I ordered the Billy Full Stack IIPA and found it incredibly well-balanced and just AWESOME. I really need to make a point to visit them in Astoria!

Also, they have this nifty screen up around the bar that shows what beers are on tap and how low they’re getting, so you know to order something fast if that’s the one you want to get.

Overall – while I wasn’t too keen on the crowd, it was during the playoffs and plenty of Rangers fans in there – which is fine, except it was super crowded in an annoying way, with people pushing around our table while we ate – I really enjoyed what I ate there and really like the beer selection. They had a couple of other beers I enjoy as well, so I’ll probably be back for a bite and a beer at some point…

Some people have complained about the prices. I don’t remember what they were, but I didn’t react much when I opened the menu, so I can’t imagine it’s anything too crazy. Maybe a bit high for Forest Hills? but multiple craft beer places have opened in the place in a short time period, so I imagine the upward trend in pricing is in line with that.