Fun fact: the very first post on the Feisty Foodie was about Mother’s in New Orleans. (This is half true; it’s definitely the oldest post, though I started blogging a few years after its date – when I switched to Blogger, I backdated the post to the appropriate date. I first started foodblogging on Xanga, which, at the time, did not allow you to change the date of posts. But my meal(s) at Mother’s had so moved me that I felt compelled to write about it years after I ate there, because I wanted to document it.)

Also fun fact: after Hurricane Katrina, one of the first things I did while everyone assessed damage – I googled Mother’s to make sure it hadn’t been destroyed by the storm.

This place means a lot to me – and as I get older and life unfolds more, it means even more. (Things that don’t need to be discussed on a food blog.) When I was discussing with Jenn places that I absolutely wanted to hit without regard to anything else, this was high on the list. I would have gone after Willie Mae’s, actually, since we drove by afterwards on our way out of NOLA and there was no line, but I couldn’t justify attempting to eat that much in one afternoon. Saturday morning, we planned to arrive in New Orleans early – I had a 2pm flight home – and hit up Mother’s, then Cafe du Monde one last time. My heart sank when we arrived and there was a line forming already out the door and down the block, though I happily discovered it was moving…

then discovered that it was so early, they were not yet serving lunch/dinner items. Crawfish etouffee – the first place I’d ever had it – slipped out of reach, as did the Ferdi po’boy I so craved. But I soldiered on.

Once we were inside the doors, there was another line, and I discovered that I could have my etouffee! in the form of an omelet. I can do that! 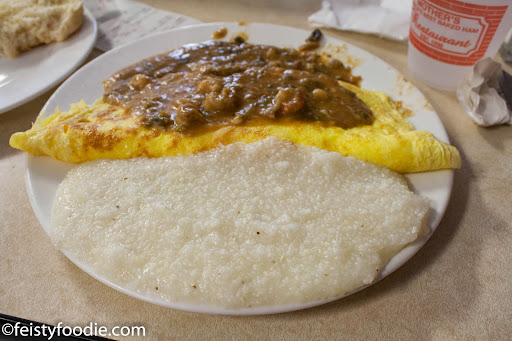 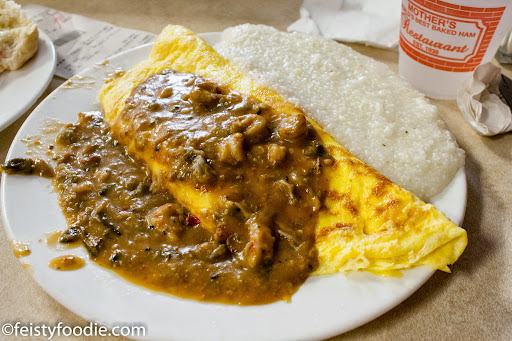 It came with grits on the side – extremely plain grits that I added salt and butter to – and was filled with crawfish etouffee as well as topped generously with it. Oh my gaaaaaa, this was delicious. Non-tomato based, and just savory to no end, I was in heaven. It was a lot of food, but I trooped through it and I believe I ate every last scrap (and left some grits). SO GOOD. I was over the moon happy that I’d not gotten discouraged by the line nor the fact that I couldn’t have the etouffee over rice, the way I think it’s “meant to be” served. 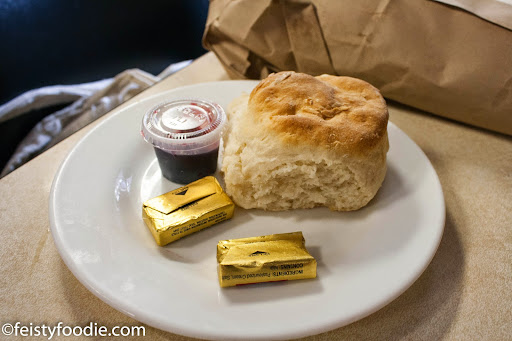 Breakfast also came with a fluffy biscuit, butter and house-made raspberry preserves, which I happily nommed down. The biscuit was fluffy to almost unbelievable quality, where I said aloud “If more biscuits tasted like this, I might actually consider myself a biscuit person.” (My one failing as one who claims to be a Southern girl at heart is my lack of love for biscuits.) The raspberry preserves made their way onto my biscuit; mixed with butter, ahhh, love. 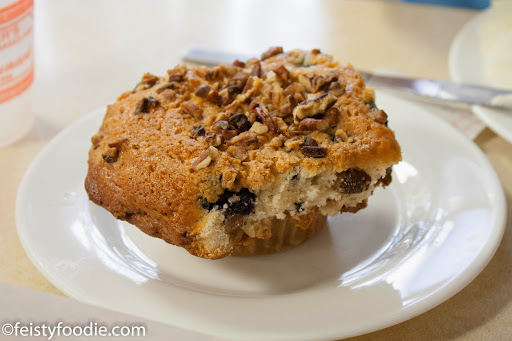 Jenn suggested I take a photo of her beautiful muffin, so I did. She seemed thoroughly enamored of it as well; it had a very unique structure that I failed to capture in photo form – the top was almost like a table, extra muffin top. Possibly extra leavening ingredient?

And… happily… while I’d earlier lamented not being able to have a Ferdi since they were not serving lunch yet, I saw someone taking one to go so when I got to the front of the line, I breathlessly asked if I could also order a Ferdi to go, for the plane. No hesitation: yes. YES. YES!!! 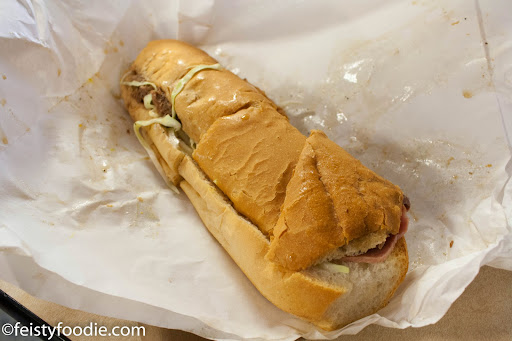 There’s no scale in this picture, but the sandwich is easily as long as, if not longer than, my forearm – approximately 10″ I guess? (I’m a tall girl.) 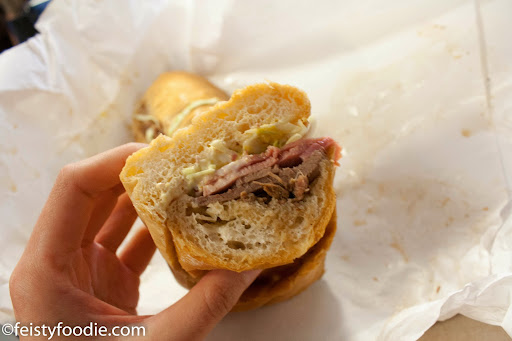 The Ferdi is a beautiful amalgamation of their famous ham, roast beef, gravy, ‘debris’, and a bunch of toppings. I ate this much later – and found it much more mustardy than my memory tells me. Which is funny because I’m much more accepting of mustard now than I was 11 years ago, but I still enjoyed it. There’s something about this type of sandwich that rejects all notions of the ‘rules’ I’ve set up for myself in terms of sandwich enjoyment: the bread is woefully soft, there’s little to no “crunch” in the entire thing, and there’s a bit more going on than I generally prefer in sandwiches – some warring within the bread, so to speak. However, the satisfaction achieved from consuming one of these, the happiness brought about by doing so, just exceeds so many other things. I was incredibly happy with it, though I grudgingly say that this is one thing from New Orleans that perhaps does not hold up to the memory of it. But if it’s the only thing that doesn’t, I am happy to say this was a very successful re-visit to New Orleans.

Overall, don’t be scared off by lines at Mother’s. I mean, I guess it could have been much longer – it barely reached the parking lot (those who visit or have visited will understand that measure) – but it moved fairly quickly, and we found a table to sit and eat. I would not hesitate to visit again, though I may stick to crawfish etouffee next time… and try something else 😉

Love. This concludes my posts about my recent visit to Louisiana… hope you enjoyed eating vicariously through me!