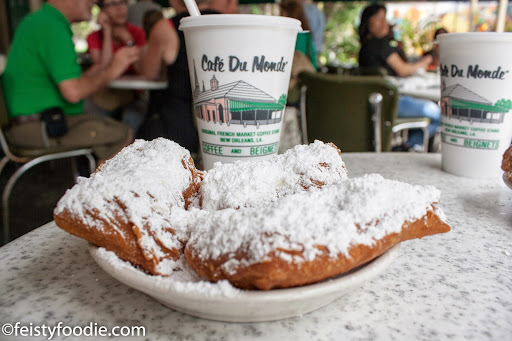 Directly after Willie Mae’s Scotch House, Jenn kindly drove us to the French Quarter so we could both wander around, looking at things, but mostly because I wanted beignets.

Here’s the thing. This was a moment of truth for me. Since my first visit to New Orleans in August 2003, I have dreamed and craved beignets. I have longed, and loved, and hoped. I have been disappointed thoroughly when menus decide to cutely name something ‘beignet’ and I order it only to be crushed when it arrives and it’s a doughnut, or a zeppole, or some other manifestation of fried dough which, at its heart, yes these are all fried dough items, but I dare you to take a bite of each one and tell me they are the same freakin’ thing.

Beignets are one of several food items about which I am extremely particular; if you call something a beignet, it damn well better be a beignet or you face my wrath.

Beignets, made properly – in the Cafe du Monde style, as it were – are light and airy; you can eat 3 or 6 or more in one sitting and not feel absolutely disgusting and bogged down with grease. Yet, quite contrarily, they are dense pillows of dough – not particularly air-filled, as it were – and they have a nice chew to them. They are doused in powdered sugar, but not teeth-achingly sweet; they lend themselves well to being eaten as-served, or being smooshed through the excess powdered sugar that snows off it as you eat it, and eaten like so.

Beignets are a thing of beauty, delight, and deliciousness.

To be lied to by a menu that claims to have them is so very wrong. The closest I’ve come was at Cheeky’s Sandwiches in the LES – at that point, it’d been over 10 years since I had the ones at Cafe du Monde, so I worried my memory was getting too faded. Or perhaps it was getting too overblown – maybe I was inflating it to an impossible standard, something that didn’t even exist.

Maybe that vision of me stuffing fried dough into my face repeatedly – three beignets a day for the entire 5 days I was in New Orleans last time – enjoying each bite so completely as to be in a state of food-induced ecstasy – maybe that was just a vision, not the reality.

And then I sat down at Cafe du Monde on that Wednesday afternoon. There was no line; it was probably 3 or 4 pm, and we sat down, immediately a server appearing to take our order (iced coffee for me, frozen cafe au lait for her; an order of beignets each). 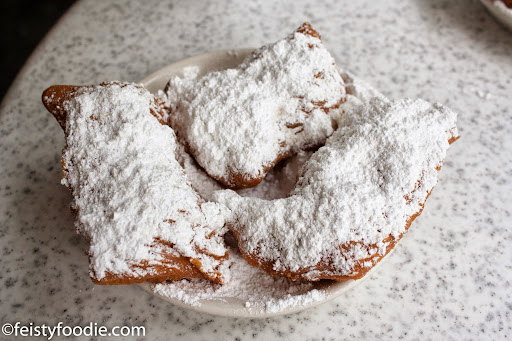 When my plate of beignets landed in front of me, I nervously peered at them. I took my time, taking photos, wondering in my head if what happened next would change my reality forever.

The truth came out in the first bite.

What my memory had failed to provide was just how luxurious a mouthful of the perfectly fried dough was with the powdered sugar melting into it; how fabulously un-greasy it was; just how delightful each chew was.

I may have been moaning in my seat; I’m not sure. I just know that I was over the moon ecstatic at just how amazeballs these really were; my memory hadn’t lied! In fact, it’d shielded me from remembering just how awesome they were! I ate every last bite and relished each one.

So good, I almost cried when I came to the end of my plate.

Of course, because I have amazing friends, Jenn took me back to Cafe du Monde – though she declined to participate this time – on Saturday directly before my flight. There was a line this time – a pretty daunting line, actually, that extended back quite a ways, though there was a police officer walking by who told fearful looking tourists that it would only be 10 minutes. I think his uniform convinced them.

The line didn’t take that long, and when I was seated, I discovered what the reviews mean by the bad/slow service. I didn’t have an issue; I’d been seated at a table that had been pushed together with another one for a large group before me. It was split apart and a woman came over and quickly cleaned off my table, took my order, and disappeared. For whatever reason – maybe it wasn’t her section – she didn’t clean off the other table nor did she take the orders of the women who sat at that table. I feel it might have been because of how brusque they were – they barked their order at her and demanded she clean their table, to which she responded by putting all the dirty things from my table onto theirs and walking away.

In any case, I didn’t take more photos, but my beignets this time were overfried; they were a little extra crispy along the edges, which didn’t bother me… except they also tasted a little stale. Completely weird, given that with lines down the block, I expected all of the beignets to be freshly fried and piping hot, but this wasn’t the case. They just tasted a little bit old, like they’d been sitting out for a bit before being dunked really quickly in the oil again.

While I ate this time, someone proposed to his ladyfriend – at the other end of the cafe, so I didn’t see how it happened. I think it was in the actual line.

This last experience doesn’t necessarily detract from my overall adoration of Cafe du Monde; if anything, it teaches me that anyone can have a bad day, an off moment. I will continue to dream of those beignets and long for the day I return… hopefully, this time it won’t be another 11 years before I wrap my lips around those sweet pillows once more.