Directly after eating sandwiches at No. 7 Sub – okay, that’s a bit of an exaggeration, it took us about 2 hours of meandering and wandering in and out of stores (and buying cheese and stuff) before we got there – Dessert Zombie and I hit our second and final stop on the mini-sandwich-showdown, Cheeky Sandwiches. Ever since TT wrote about them 2 years ago, I’ve wanted to go… but just never found myself down there (and honestly, after I figured out exactly where it was, it’s literally a block outside Chinatown – so many other things to eat there!). So we made a special trip. 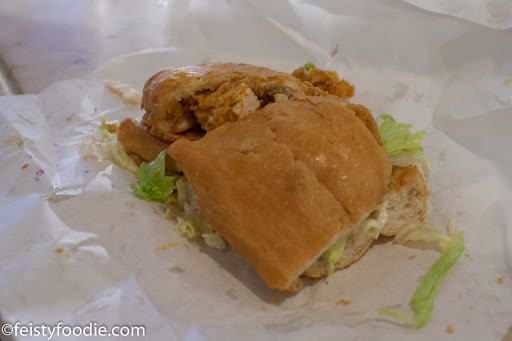 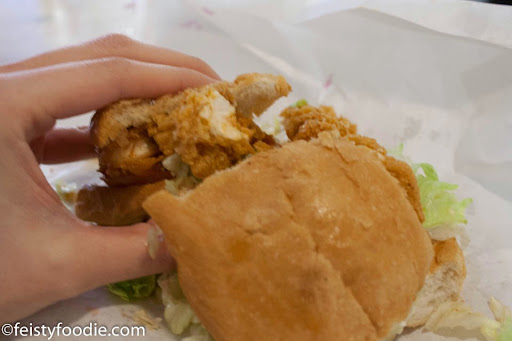 Hard to hold my camera steady with one hand, sorry. Dessert Zombie ordered the shrimp po’boy, and graciously allowed me a bite. I thought it was … good, but doesn’t hold a candle to po’boys in New Orleans. Why would I think that’s a fair comparison? Mostly because some people said that this place comes really close. It doesn’t. I admit the bread was the appropriate, soft, easily smushed down so you can take a bite kind… the shrimp was fried properly, but my bite just didn’t have a lot going on in terms of flavor or remoulade. Where’s my remoulade? … maybe in another bite I would have tasted it … 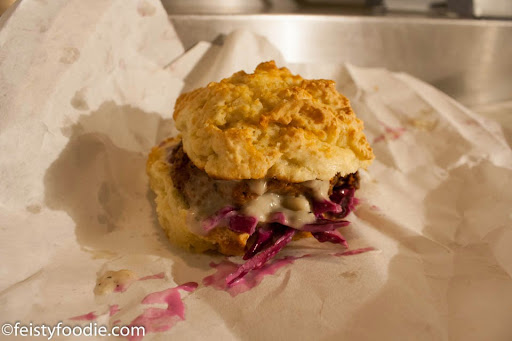 I obviously went with the fried chicken biscuit with cole slaw and gravy – um, hello, do you not know me by now? – the biscuit was sturdy enough to hold up to the chicken, and while texturally this hit all the right notes, I felt the sandwich fell flat for me…. then I took another bite, and got a good amount of the gravy and that hit of pepper… yum! It was a pretty heavy sandwich though, and since I was still full from the previous sandwich, I gave the last 1/3 to Dessert Zombie. Plus I wanted to save some room for dessert. Wait, who am I? 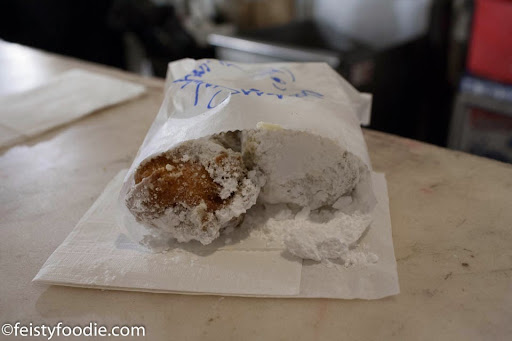 Someone who knew there were beignets to be eaten! Freshly fried and holy crap, 4/$1 and these were the closest I’ve ever had to Cafe du Monde’s beignets in NYC. Not entirely airy. Not entirely dense. Definitely not pizza dough (you can TELL when a place does that) nor doughnut batter… just the right amount of chew and give in each bite, and completely soaked and rolled around in powdered sugar. Perfect. I am absolutely overjoyed that I know where to get beignets – the real deal! – and for only $1. For four smallish pieces, but damn, they are yummy.

Overall – very good. I would definitely return for a cheap sandwich and the kitsch interior. Our server was super nice and friendly, and chatted with us while we waited. The beignets were fabulous! I want more! And I definitely recommend it for your Nawlins fix!