I’m not going to lie though, I’ve participated over the years many times, in recent years always because someone thinks I enjoy it and then I feel like a jerk if I respond with “no, thank you” to an invitation from a friend simply because I dislike the surrounding event. So I go, and suffer silently.

In any case, I’m not here to denounce Restaurant Week, nor am I here to defend my choice to go this year. I’m simply here to report on my experience at one of my favorite chef’s restaurants during Restaurant Week 2014.

I arranged for a group of four of us – BFF, Dessert Zombie, and Mr. “I can eat anything!” to go on President’s Day, since we all had off our various occupations. When we arrived for our 1:30pm reservation, we were seated promptly with a smile. We looked over our menus, made our choices, and the dining commenced. 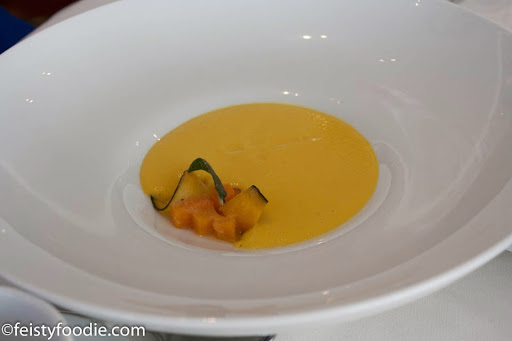 BFF and Mr. “I can eat anything” both chose to start with the butternut squash soup with pickled delicata squash and brown butter. They both remarked on how creamy the soup was, and seemed to enjoy it. 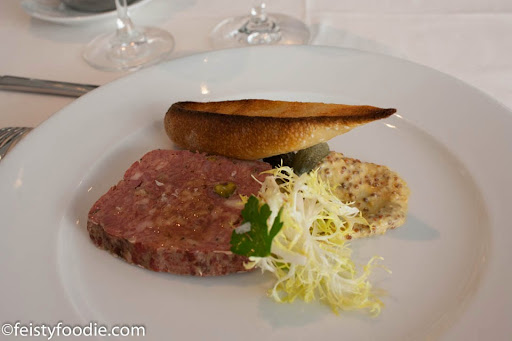 Dessert Zombie and I were also twins in our choices and both chose the terrina di maile – the housemade pork pate with mustard and cornichons. While I felt there wasn’t enough bread for as much pate as we received, the pate itself was rich, pork-tastic, and had bits of pistachios throughout that I liked for the textural change-up. 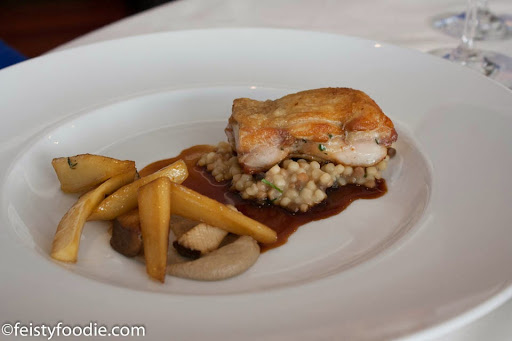 For their main course, BFF and Mr. “I can eat anything” again chose the same – this time, the pan roasted chicken, mushroom puree, parsnips and hen jus. The chicken skin was described as “heavenly” and the chicken tender, delicious, and awesome. I saw clean plates, so I assume everything was above and beyond what they hoped for. 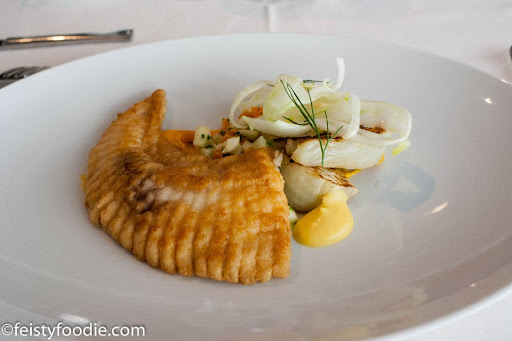 DZ and I once again chose the same – pan roasted skate wing, braised fennel, sweet potato, guanciale, and bitter orange. The fish was perfectly cooked – tender, pulling off into long strands of very mildly flavored fish that was bumped up by all that was around it. Both DZ and I cleaned our plates happily – I especially enjoyed the brunoise behind the fish that you can’t see. 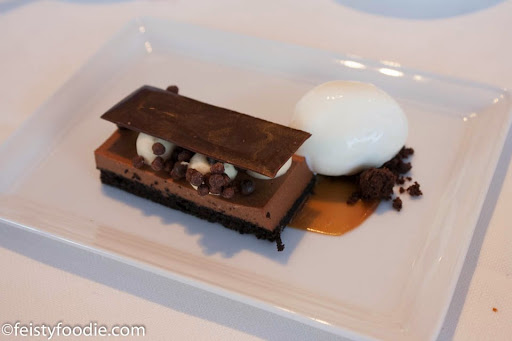 Three of the people at my table ordered the chocolate dessert: dark chocolate mousse with a sheet of chocolate up top, crunchies within, and fior de latte ice cream next to it. Mr. “I can eat anything” really can’t eat anything, so minus one bite, this befell me to devour happily. I really enjoyed it – it WAS quite delicious, especially with the crunchies to counter all the softness of the dessert – but I was eager to return to my own dessert… 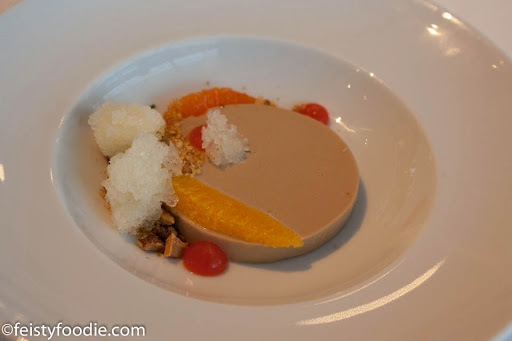 Blood orange panna cotta with balsamic crema. Oh my goodness, the texture of this panna cotta surpassed nearly every panna cotta I’ve ever eaten (and there’s been a lot, believe you me). Dense and creamy all at the same time, rich with the taste of blood orange but not overwhelmed by it, this was the perfect end to my meal.

Strictly on food alone, I was pleased with our meal. It was the first time anyone in my party besides myself had been there, and I thought it was a good introduction to Ai Fiori’s cuisine. At $25 for 3 courses for lunch, when their lunch menu usually offers a $42, two-course prix fixe, I think there was a good deal had and they truly embraced the spirit of Restaurant Week without compromising either their standards nor their bottom line.

(My major complaint about a lot of restaurants during RW is that they just offer random items that don’t showcase the restaurant’s good qualities, they “cheap” out on choices, and no one wins. The customer, who may be trying out a restaurant to add to their favorites, winds up getting a subpar meal and assumes the worst, that the restaurant is always like that. The restaurant loses out on a potential repeat customer. No one wins.)

However, while our service in the beginning of the afternoon was stellar, at some point, our server began… not ignoring us exactly, but … well, ignoring us. We didn’t really need anything, but he stopped appearing at our table. Our coffee – and the wrong number of them – came well after our desserts did, and no one ever checked on us once we were done with dessert. We literally sat there for 15 minutes, just chatting – which wasn’t unpleasant, but felt strange that no one ever came by to either see if we wanted more coffee or anything else. Our meal, from start to finish, was a little over 2 hours, which is a touch long for lunch.

The place was half to three quarters full when we arrived; by the time we left, a lot more tables had been seated. Actually, a table next to us was seated about 30 minutes after we arrived, and managed to eat, pay and leave before we did – despite also ordering the same 3 course menu.

And though this will surprise exactly no one, almost all of the diners in the restaurant towards the later part of the afternoon were Asian or of Asian descent. I remarked on this to my party, and someone responded “that’s because Asians are cheap” – ah. (Our entire party was of Asian descent.)

One final note that has absolutely nothing to do with my opinion of Ai Fiori – except maybe to laud the servers for not laughing in someone’s face – a group of 8 young Asian Americans came in at one point – well, they trickled in, as one of their party actually showed up about 2 hours late, I would have been livid – and one of the women was wearing cat ears. I mean literal cat ears. At some point, her friend began wearing them. I found this more than a little distracting… criticize me all you want, but I don’t think cat ears are appropriate attire for dining at a restaurant like Ai Fiori. Go to McDonald’s if you want to wear animal ears at the dining table.

Despite the quirky service towards the end of the afternoon – which I attribute completely to the surge in diners, and possibly to some snobbery regarding Restaurant Week diners – I thoroughly enjoyed my meal and would recommend anyone visit for a RW lunch. Outside of that, you should go here anyway because the food is amazing on a regular and consistent basis, and while it’s by no means inexpensive, it’s well worth every full priced penny.