While I said Sushi Seki was the last birthday omakase post – and meant it – I do have another birthday sushi post. I wasn’t going to let another year slip by without my family celebrating my birthday! Working within the constraints of my family’s specific peculiarities (every family has them), omakase in the city just wasn’t going to happen. So after a bit of thought, I chose a place that my brother and sister have mentioned several times in the past few months – an all you can eat sushi place.

Hey, it’s kind of like omakase, right? It’s made fresh for you, and you keep going until you say stop. Right? Right! … right.

Plus my family is full of piggies. We eat a lot. Going to one of those other places would bankrupt us before we were full. 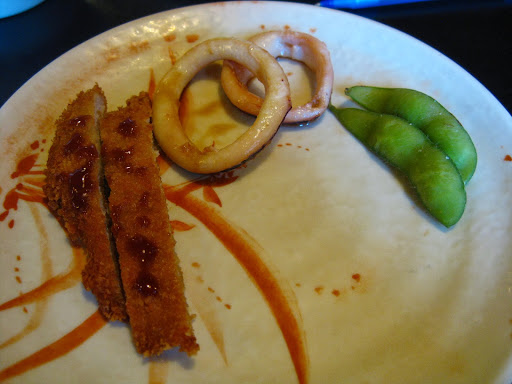 If you’ve never been to an all you can eat sushi place – which differs from a sushi buffet in that this is order as you go, instead of a buffet of stuff that sits out and is communally shared throughout the restaurant – they generally give you a piece of paper that lists out all the items available. Some places will offer items with an upcharge – certain special rolls with bigger ticket ingredients might command an extra $1.50 to be included, for example. At Sushi Village, none of the items require an additional fee, which is pretty nice – especially given that they have a fairly large selection of items.

Above, some of the cooked items we started with – this is just what I put on my plate, I wasn’t able to get a photo of all that landed on our table, which included udon, soup, salmon teriyaki, and more. What’s above? Pork katsu, BBQ squid, and edamame – the pork katsu was actually pretty good. I wasn’t the biggest fan of the squid, but my family seemed to like it a lot. 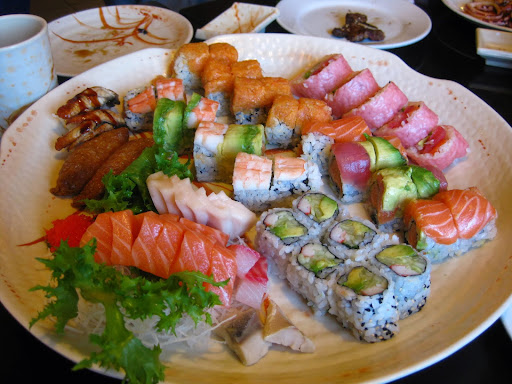 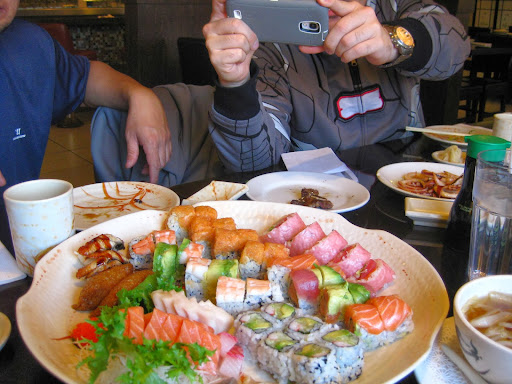 Sashimi – salmon, white tuna; a bunch of random rolls, some inari sushi; they have some interesting specialty rolls. The pink wrapped one doesn’t have seaweed and instead employs Nasoya, soy bean wrappers… I believe that was a mango lobster roll, actually. 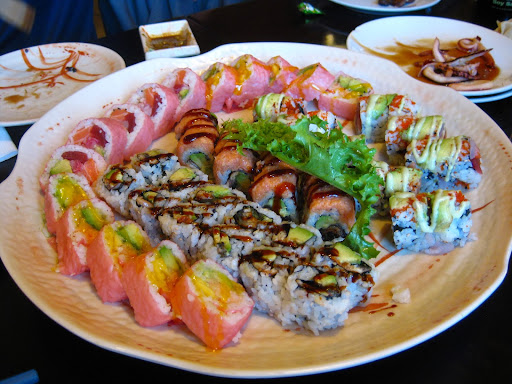 Actually, this one looks more like the mango-lobster… the pictures are more to show you what a wide variety they have, because I didn’t take a picture of the menu and I really don’t remember what half this stuff is… even though I was just there a week ago for big bro’s birthday. Literally.

We ordered more platters, but I only took pictures of the first two.

Mostly I wanted to share that this place is pretty decent – the staff and likely the owners are Chinese, so if “Chinese sushi” puts you off, then this might not be for you. But the quality is on par with your average “take out”/local/neighborhood Japanese place (which, in the NY area, are mostly owned by Chinese people in any case), and the sashimi is pretty fresh. It satisfies a craving, and isn’t terribly expensive in the process – I believe around $20/person.

Thanks to my family for the lovely, gluttonous dinner!!! Had a fab time, even with the bratty one – my mini-me – throwing a temper tantrum and repeatedly kicking me throughout dinner. Thanks for the cupcakes, too – lovingly decorated by my adorable nephews – and the fun times!

Basically – would I go back? Yes. Would I go out of my way to return? No, unlikely, but if my family suggests it or wants to go, I know I’ll have plenty of tasty bites to enjoy.

… I know, this is such a total 180 from my recent high-end sushi posts, and the next post as well. You guys DO know that I don’t eat high end, fancy pants all the time, right? That’s just not who I am – it’s all about balance 🙂