**Apparently, despite the fact that I didn’t drink much, I failed to photograph several courses and am currently really irritated at myself, having only just now noticed this. Grrr. Apologies.

The italicized descriptions are pulled straight from the copy of the menu they sent us home with; anything additional is from my notes.

Back in February 2013, SFG told me about Commis and really wanted to go there. Unfortunately, due to lack of proper planning on his part, we were unable to secure reservations and didn’t go. However, ST later told me it was incredible and I should definitely go – and sit at the chef’s counter – and it’s only $85 for 8 courses, what the heck?! I know, it’s in Oakland, so if you go, driving is optimal, but the BART also goes there. I secured reservations for when I was in SF next, tapped my buddy Jetes, and off we went. (She drove, so I am not entirely sure how close the BART is.) 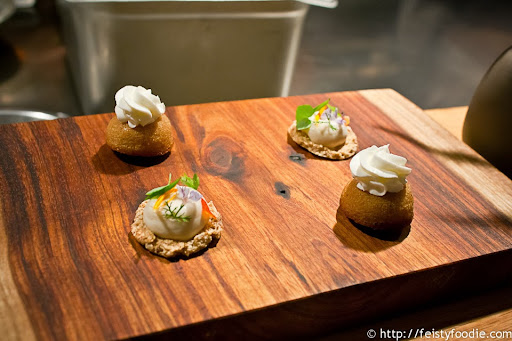 Our first bites – whipped fiscalini cheddar (which is one of my favorite cheeses; it has the characteristics of a hard Italian cheese, with salt crystals and all, but the flavor of cheddar – brilliant!) on toasted oat – whipping the cheese changed the texture entirely, creating a fluffy cheese spread that was delicious – and caramelized onion financier, which was also brilliant – I’m always for making traditionally sweet items into savory ones, and making a savory financier proved an excellent choice. The texture of a properly made financier speaks to me – crisp edge, chewy center, and the flavor was perfect here.

Sitting at the Chef’s Counter as we were, Jetes and I were able to watch the chef and cooks plate each course with deft precision and ease. There were tweezers and careful placement of each piece, and occasionally, the chef came over to replate or reposition a part. It was a fascinating view into a professional fine dining kitchen.

no photograph because I am a do-do brain obviously

Our next course: pacific oyster, preserved celery with lemon verbena and dill– was the perfect little bite to whet our appetites for more. 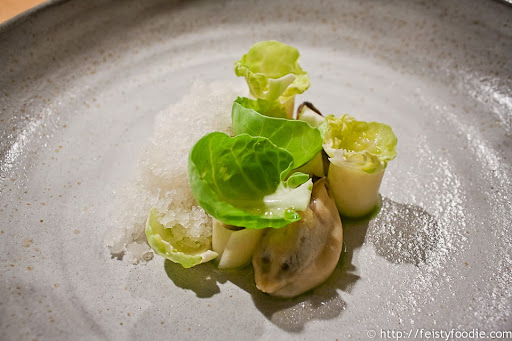 Third: mussels with frozen sea water, kohlrabi and horseradish – and Brussels sprout leaves – proved an interesting combination as that sea water was really just as salty as actual sea water, but frozen. The combination of the textures and the bright flavors of the vegetation was very nicely done – and we sat there watching the commis (which, in a professional kitchen, usually means “kitchen b*tch”) painstakingly roll the kohlrabi into cylinders that the chef occasionally came over and re-did. 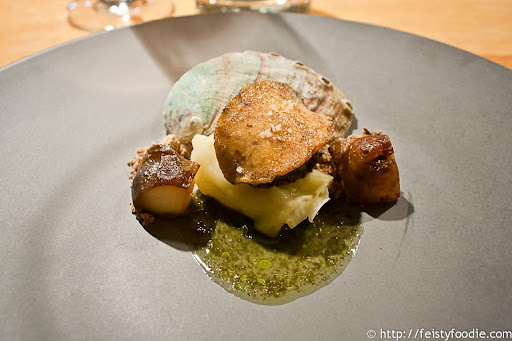 Fourth: abalone with pumpernickel, hen roasting juices with ulva and yuzu – sunchoke and cabbage. Real abalone is something of a challenge to find on menus – this did not disappoint. If you’ve never had abalone, I would describe it as the loveliest chewiness of that part of the clam no one eats… it has a very distinct texture, though I find the flavor to be fairly mild. The richness from the roasting juices served to bring another level of complexity to the dish. 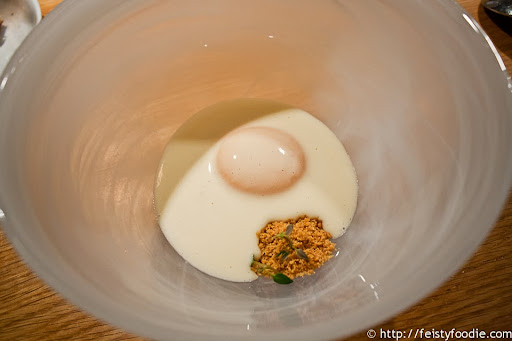 Fifth: slow poached egg yolk with sweet and savory spices, warm potato – shallot, cream. Slow poached eggs are something to behold: the white is silken as the softest tofu, while the yolk reveals the creamiest texture, rich on your tongue, like velvet. The sweet and savory spices reminded me vaguely of “holiday” flavors – you know, nutmeg, allspice, cinnamon, clove, that sort – and I wasn’t all that overly fond of that, but they served a purpose, which was to bring the whole dish to a different level – each bite with a varying amount of the spices was different from the next. 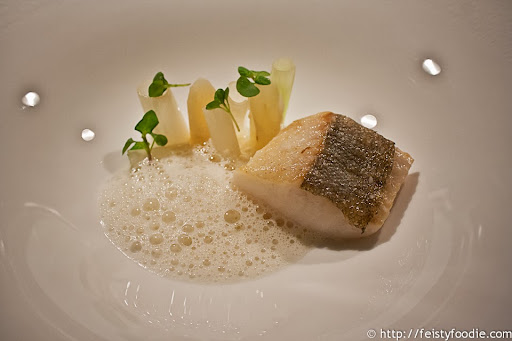 Sixth: grilled sablefish with salsify and shiso leaf, bonito butter – leeks. This intensely meaty piece of fish was cooked to perfection; flaking into big, fat slices that remained juicy, melting in my mouth with the slightest pressure from my tongue against the roof of my mouth. Awesome.

again, no photo because I’m a do-do head, but this was just a cup of brown-tinted warm liquid, so

Seventh: tisane of button mushrooms – we were instructed to “sip” this. Tisane, by the way, is just a fancy word for “liquid created by steeping items that do not contain tea leaves or caffeine” – all those fruit or flower based teas that y’all may drink that don’t contain any actual tea leaves are actually tisanes. Chrysanthemum “tea” for example, popular amongst the younger crowd at dim sum, is not really a tea – it’s made from steeping chrysanthemum flowers – it’s a tisane. Chamomile, herbal teas, all that sort of thing… actually are tisanes. *the more you know* In any case, it was almost surprising how much flavor could be extracted from the humble and simple button mushroom from a simple steeping – we basically drank the essence of a button mushroom, happily, very concentrated umami/savoriness and yet, somehow refreshing almost. 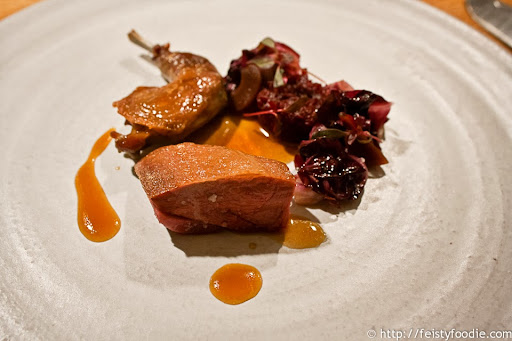 Eighth: roast squab with red beetroot in two year old cherry vinegar, chicory – quail; confit leg, radicchio – whenever I’ve had small game bird at fine restaurants, I’m always insanely pleased with how much flavor they pack into these tiny little birds. That rectangle of meat had extracted from it every last bit of flavor: deep, intense, distinctly not chicken, but retaining that which makes it a bird… just excellent, excellent preparation that made the meat sing its own praises. Delicious. 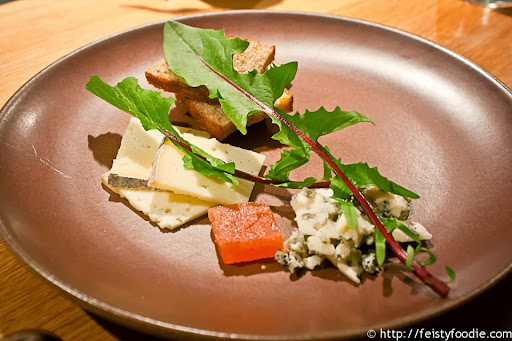 When we first sat down, a server had appeared and explained to us that there were only two choices to make: what to drink (either the wine pairings, or wine by the glass), and what to finish the meal with: cheese or dessert. When we asked if we could have both – a cheese plate, plus dessert for each of us – our server said of course (for a minor additional charge). Because the tasting menu was so “inexpensive” (relative to what we were getting and other places we’d been to), Jetes and I decided why not? So the above cheese course came, though we were both super full by this point and about to burst. I left her to most of the cheese.

(Which is listed on the menu as: American artisanal cheeses, quince and seeded raisin bread – I am sure they explained which exactly we were served, but I failed to write this down. Was I drinking more than I recall? I don’t believe so…) 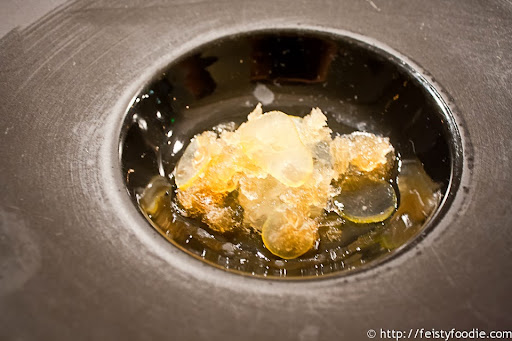 Palate cleanser: oro blanco with citron, fresh hop ale – this was the first SUPER FREAKIN’ FAIL OF THE NIGHT. For me, in any case- Jetes wasn’t quite as horrified as I was. The word she came up with was simply “bracing” but I basically thought my whole mouth was going to flip inside out in its attempt to escape this flavor. There was basically zero sugar; think of the most bitter, least sweet grapefruit you can imagine, then multiply it by about 3. Not 10 – I might have actually lost it if it was 10x more puckery than it was – but it was pretty hard for me to eat more than a few bites. She told me that if I ate all components in one bite, it was much more bearable and balanced, but I couldn’t get past that first bite more than another half bite before I decided no more. I was really displeased with this dish – no warning about the complete lack of sugar! Or that each bite should contain a little bit of everything. Oh well. Can’t… win… them… all… right? 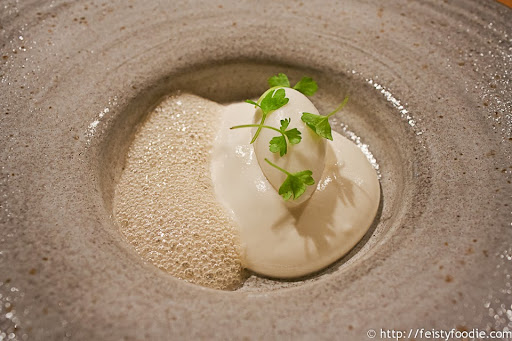 Eleven: pears with celery root mousse, rosemary and rye – pear sorbet with celery mousse, rye, rosemary – the rye was the foamy looking bit, but actually a frothy caramel, and quite “bitter” – relative to the pear sorbet but not the last course, ha. The pear sorbet tasted just like a very cold, fresh pear… while the rye caramel and the celery mousse brought another dimension to the dish, rounding everything out fully to such a beautiful mouth-feel. Despite being ridiculously full, I so thoroughly enjoyed this course that I scraped the plate. Super refreshing and light… the perfect end. 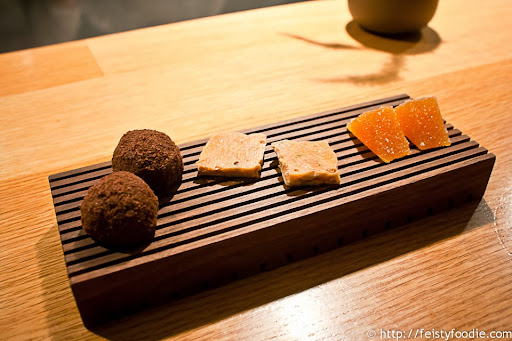 Mignardise of course: persimmon pate de fruits, a brittle of sorts and a truffle. I failed to write down what kind of brittle or truffle, but must say that all three bites were delicious: distinctly, I recall eating the pate de fruits, which is something I usually don’t bother with, but this had the perfect jelly texture, a bright persimmon flavor that shone through… I almost wanted to steal the big container they had them stored in, haha. For later consumption, not for on the spot eating…

Overall, I thoroughly enjoyed my entire meal, from start to finish (minus that palate cleanser – *shudder*) – and highly recommend it. For the price, I don’t think you can get a better value or experience in most Michelin starred restaurants – with one glass of wine each, the added cheese course, I paid about $140 with a nice tip (that’s for one person). I think it’s perfect for special occasions or a splurge – and surprisingly, reservations weren’t too crazy to get. Remember to ask for the chef’s counter! the best seats in the house.

Enjoy… I know I have been recommending Commis to everyone I know heading to the area! Totally worth it!