I have been completely remiss with my blogging duties for scads and scads of reasons (not least of which is that whenever I press “save draft” – as I did 10 minutes ago – my entire post gets eaten, instead of being saved), which I won’t fully get into here. However, I recently made my first trip to London – my first time ever in the mother country! – mother to the United States, that is, not MY mother’s country – and chose to fly Virgin Atlantic, mostly because I’ve enjoyed flying Virgin America on my fairly regular trips out to the West Coast. (Though I haven’t really blogged about those flights, I did make mention of being upgraded to Main Cabin Select and my experience there once… and I will certainly be flying Virgin America when I eventually bring my doggie on that cross country flight.)

I guess that means it’s time for some more travel blogging! Been a while, eh? 🙂

A late evening flight meant that we were served dinner as soon as we leveled off in the air.  We were given menus and our choice of braised beef stew with vegetables, penne pasta with roasted aubergine and Italian cheese, or butter chicken with mixed basmati rice.

(Funny side story: for the past month or so, I’ve been eating Indian food at least once a week – ordering takeout from my local place with a friend while watching TV at my place. I usually get butter chicken. The week I went to London, I actually ordered something different, so when I saw it on the menu, I had to laugh and order it – so I could keep up with eating butter chicken once a week, haha.) 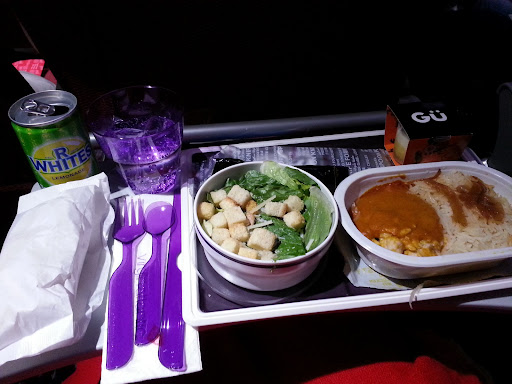 When I ordered Sprite, I was given a slightly sparkling lemonade, which was interesting but later proved too tart for me to enjoy regularly. The salad was fine… the butter chicken was actually pretty tasty, though of course not quite as yummy as the usual place… but that little “Gu” in the upper right corner? OMG!!! This was mango and passion fruit, the tiniest little cup – yet the perfect portion size. Slightly creamy, slightly tart, mango-y and passion fruit-y (I don’t talk much about my adoration of passion fruit here, but yes: I love passion fruit), it was like a mini cheesecake. Except with mascarpone. And light. (I don’t like cheesecake usually.) And just so, so good. I vowed to look it up later to see if I can get GU in the US.

After “dinner”, what I’m terming “hospitality packs” were handed out – containing sleep masks, socks, a toothbrush, a tiny tube of toothpaste, and a pen – and I went right to sleep on the not-full flight (two seats between me and the person next to me, since I was in the middle-row). When I awoke, breakfast awaited me – though it was 4am EST so I opted to just shove the entire box in my bag and eat the muffin later; much much later due to some awkward maneuvering through an unfamiliar city undergoing construction on the Tube…

(Breakfast was a box containing a granola bar, a muffin, and a small container of orange juice, and was perfectly fine, not particularly photogenic.)

On my late afternoon flight back, service was quite a bit different. As soon as we’d leveled off, we were served a beverage with sour cream and onion pretzels (yum; flavored pretzels don’t seem to have made a splash here yet? – they seemed to be the norm across the pond) – I had lemonade, which is when I decided it was too tart for me to continue ordering. Then, right after we handed away our trash, we were served dinner: our choice of steak and mushroom cobbler with diced potatoes, aubergine parmagiana with cheese and herb crumb topping, or chicken korma and pilaf rice with peas.

Come on… I didn’t eat any Indian food while I was actually in London, despite hearing that the Indian food there is fantastic, so I had to go with chicken korma. Plus, korma is actually one of the first Indian dishes that I truly fell in love with here in the States (though I’m of the understanding that it’s a heavily British-influenced pseudo-Indian dish). 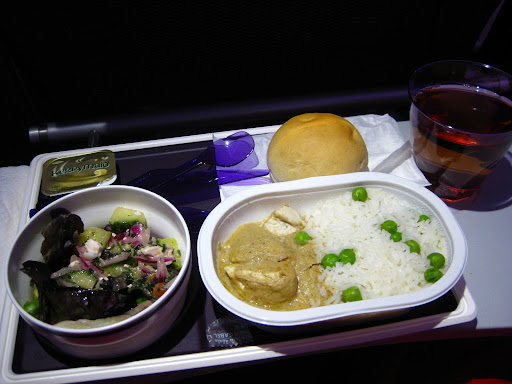 I think this time I had apple juice.  The “fruity Waldorf salad” (as described on the menus they handed out) was actually a Greek salad – cucumbers, feta, oregano, an oil/vinegar dressing… not that I’m complaining, because I actually love Greek salads, but I was definitely surprised. 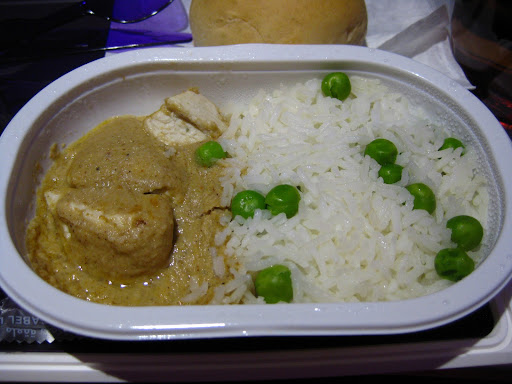 As for the chicken korma – white meat that was surprisingly not dry, and the korma was lovely, heavily spiced and almost spicy (hot), even. I ate this very happily. 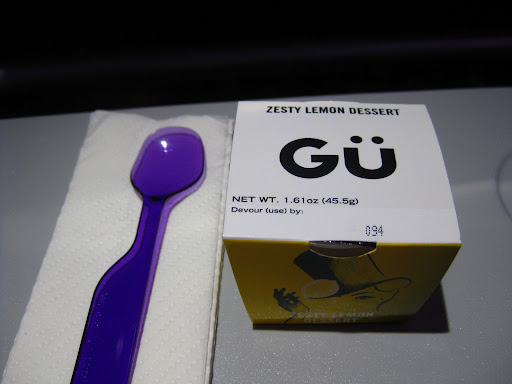 Strangely, though on my flight going, everything was served at once, this time, dessert was served shortly after our dinner plates were cleared away. I was ecstatic to see another GU coming my way – this time, a lemon one. One of my great joys in life is lemon pastries/desserts – I love tart things, I just love that pucker, the slight lift of sugar and just… I love citrus. In just about everything. Ahem. Anyway – while I adored this one as well, I did give the edge to the mango & passion fruit one. And I did eventually Google to find out that Gu IS IN THE UNITED STATES, but their website is less than helpful and just notes that it can be found in “specialty grocery stores in Manhattan” – which means the next few months will find me wandering in and out of grocery stores in Manhattan to see if I can find them, sigh.

Dear GU, if you are reading this, please send me a comprehensive list of where I can buy these – even better, if they are available in Queens!!! xoxox

Shortly after that, I settled in for a quick nap, and woke up when I heard the flight attendants saying “ice cream. Ice cream? Ice cream…” – I got too excited and failed to snap a pic, but they were giving out Skinny Cow ice cream pops. YUM!!! 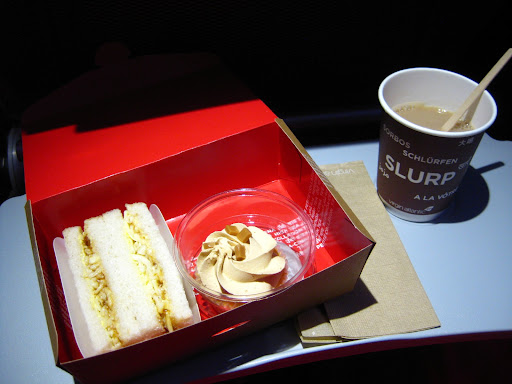 About an hour before we landed, “afternoon tea” as the menu denoted: cheese and pickle finger sandwich, a banana toffee cupcake, and I don’t remember what I was drinking. I can’t imagine it was coffee because we landed at nearly 8pm EST, which means I wanted to sleep shortly after getting home and unpacking. (I’m sensitive to caffeine.) 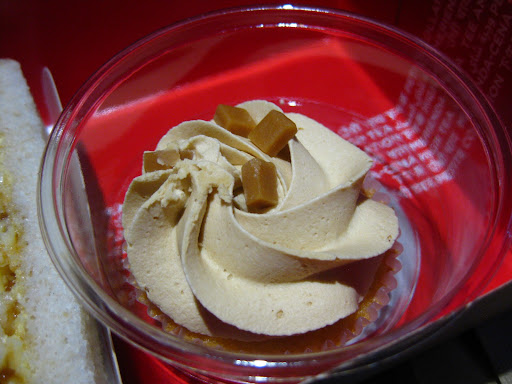 The sandwich was as expected, but the cupcake – which I foolishly forgot to write down the purveyor (which was marked on the bottom of the container, and it seemed like it was a small business, which I gave mad props to Virgin Atlantic for supporting!) – was quite lovely. A bit too much buttercream for me, but the flavor overall – toffee bits, a bit smoky, not cloyingly sweet, moist cake… pretty tasty! I liked my little treat very, very much. 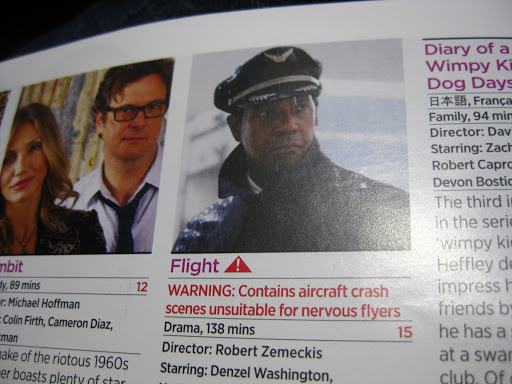 While flipping through the in-flight magazine, I came across this movie listing’s warning for Flight: “Warning: Contains aircraft crash scenes unsuitable for nervous flyers.” I laughed, mostly because if anyone was on the plane who didn’t know what Flight was about, well, did they live under a rock? Plus… it’s in the description. Plus… I mean, come on. But I appreciated it nonetheless, because I can be quite spacey and were I so inclined to watch such a movie, might have flipped it on without connecting that I probably shouldn’t. (I have no interest in watching Flight, so it wasn’t going to happen anyway.)

(I actually posted this photo to Facebook, and the outcry in comments really surprised me. We all have individual TVs in the headrest in front of us; you can turn on the movie or choose not to; it’s not like we’re captive to watching it; I don’t see why a movie – particularly one that received so many nominations – would be removed from being shown on an airplane just because it was about a plane that makes some unexpected and unpleasant turns.)

One last photo: I stopped by the little kiosk in the airport to pick up some snacks and also got these: 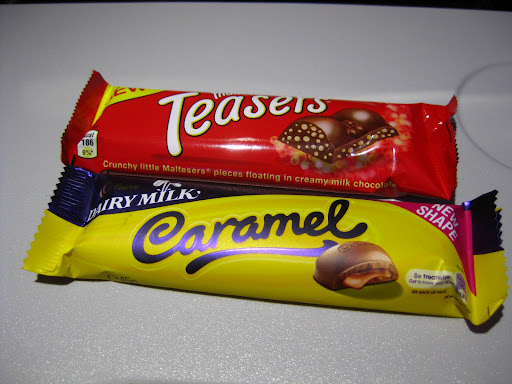 I’d seen a funny commercial for the Teasers while I was there; that one’s okay. Marketing works. But the caramel *sobs* why did I only get one? I really, really liked it – it has things I like, so why wouldn’t I?! plus they’re well-executed… sooo yummy, a little bit of caramel, a bit of chocolate… yummmm… can someone please send me more… oh my!!!

The bottom line here: I really enjoyed my flights on Virgin Atlantic, both ways. The attendants were exceedingly pleasant, even faced with screaming children and annoying passengers (I won’t even get into that!), the seats were comfy as can be expected, and while the flight wasn’t cheap, it was the cheapest I found for the dates and times I needed. There was plenty of entertainment available, with systems that worked well (as far as I used them), and I had plenty of space to spread out as surprisingly, both flights weren’t full (good for me, but I hope the airline is doing well and continues to operate!!!). The food all exceeded expectations and was either average or above average, with lots of little treats to keep things interesting… and I would not hesitate to book another Virgin Atlantic flight again.

Also, just before we began our descent into landing, the attendants passed out “a little something sweet for landing” – small rolls of candy hearts. Love the idea… very cute and made me feel very pleasant.

I highly recommend flying Virgin Atlantic… oh! I forgot the best part. Boarding was smooth and quick both times, and we landed ahead of schedule both times – almost an entire 30 minutes ahead of schedule on our way back, despite flying against the current/headwind/whatever you call that thing when you fly west.

Thanks for the great coming and going, Virgin Atlantic!!!

next post… why I was in London, and the best pizza in the WORLD.