The morning of my flight home, SFG suggested I pick up Pollo Campero for my flight, and I’m nothing if not obedient… He mentioned that it’d just recently opened in the Mission, and the lines were always nutty. It’s a South American chain that’s making a mark in America – though if you click that link, apparently there are a fair number of locations in NY already, including one that’s not too far from my home.

And if you have never thought I was particularly funny before today,… well, if this post doesn’t make you crack at least a tiny smile, YOU ARE DEAD INSIDE. 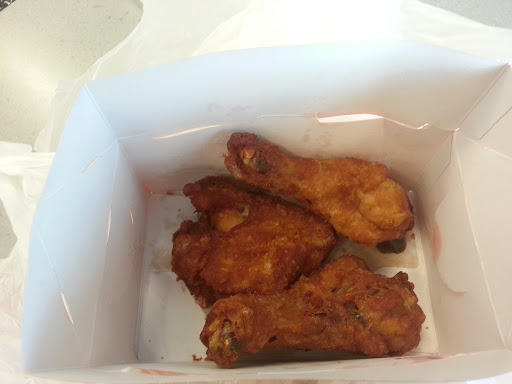 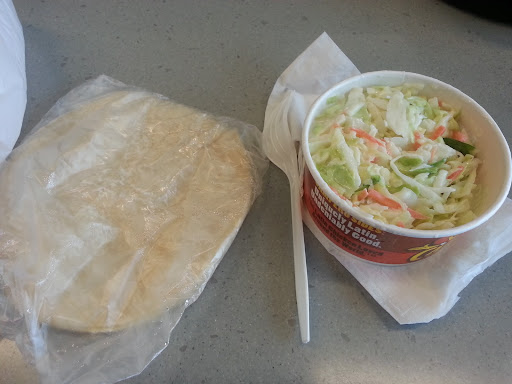 There wasn’t much of a line when I went around 11:30a. The system is quite interesting; if it’s takeout, you enter through a separate door on the left where a woman sitting at hostess stand takes your order and transmits it to the kitchen. You then enter, pay on the side, and wait for your number to be called. Then you clutch your food in your hand and walk out, inhaling the tantalizing scent of delicious fried chicken.

Oh, you get to choose a side, your choice of tortilla or dinner rolls. I knew I probably wouldn’t eat the carb so I asked her to choose for me and, without blinking, she immediately said “tortilla.” Sure, okay. I chose cole slaw cuz I like it, but this one was saturated in mayo, slightly too sweet, and reminded me of KFC slaw – except not chopped as fine as KFC’s (which I kind of like, sometimes). It passed as a veggie side and to cut the fried chicken taste with another taste while I ate, but I’d get a different one next time.

As for the fried chicken… wellllll. See, I took that fried chicken in its box and bag onto the BART to SFO, figuring that I had 2-3 hours before my flight (I gave myself extra time, knowing I might have issues in security because um, my driver’s license was expired – which wasn’t an issue GOING to SF, though, from JFK), and could leisurely eat my chicken while sitting at one of the awesome tables in the waiting area where Virgin America flights to JFK generally board (having been there enough in the past few months now). (The tables are awesome because they boast outlets galore and tall chairs or lower ones, instead of having to hunch over your multimedia device).

PHEW was that a long enough run-on sentence yet?

As expected, the TSA guy checking my ticket and ID at the start of the security line didn’t like that my driver’s license was expired. He asked if I had any other ID. “I have my passport,” I confirmed. “But it’s expired.”

The look on his face was not amused. “Do you have any ID that’s NOT expired?”
“Well, I have major credit cards, but they don’t have my picture on them.”
“No.”
“Ummm…”

Cutely, he then asked me if I had a student ID. Awww, thanks – I guess I look young even to fellow yellows. I mean Asians. Erms.

So I whipped out my student ID – which I could have sworn had no expiration date on it, as I’ve used it plenty of times in the past few years – but it shockingly had a sticker on it in the corner with a years-past expiration date.

Pointing at the sticker, the TSA guy said, “Really?” and I shrugged.

I wasn’t mad. He was just doing his job. I started shuffling through my cards, knowing full well that no amount of shuffling would reveal another ID. There’s only so much I could do though, and I really don’t believe he wanted to keep me in SF anyway. He watched as I shuffled quietly through my cards, the line behind me growing longer.

Finally, he must’ve seen something in my shuffling, and he asked, “Do you have a BJ’s card?”

I handed over my BJ’s card – which has no expiration date on it – and he sighed, looked at it, looked at me, then scrawled on my ticket. “Next time, please bring something that’s not expired, or… just don’t do this again, okay?”

Yes, dear friends. I got through security using a wholesale club card – which I happen to know for a fact is expired and has been for several years.

I wish I could tell you that the story ended here… however, as I struggled to get into the security line without everyone behind me stabbing me for taking up so much of their time…well… I went through the full body scan without a complaint. I didn’t set off the alarms.

Then… I realized that the guy sitting at the computer wasn’t moving the belt. He was STARING at my bag. I could see the outline of my sneakers, of some of my items – I have a lot of wires/chargers, my camera, lots of stuff in there – and I wondered what was the problem. I worried.

I wanted to eat my fried chicken (which passed through the x-ray without an issue).

As I stood there, shoes slipped back on, staring with concern at the man about to have my bag pulled off belt, I tried to think if I actually had anything problematic in my bag. No… no, I stopped dating that doofus years ago, there’s no way there was anything questionable in my bag. No.

My pink rolly bag was indeed pulled off the belt, and someone called over to check it. As I waited nervously, the woman – who was an absolute doll, much nicer than anyone else who’s ever stopped to check my bag (I had a woman yell at me “I can’t tell you why your bag was pulled off, stop asking!” – geez, I just wanted to know how to PREVENT this from happening again!) – cheerfully chatted with me about my camera, explained what she was doing as she was doing it, and asked me repeatedly about my sneakers that I’d packed in the bag.

I told her there were two pairs of shoes in there. She pulled one pair out and said “Ahhh… are these sausages?”

Okay. Fine. I’d bought some sausages at Boccalone, and when I went to pack, I realized if I wrapped them up in plastic bags, I could just shove them into my shoes to save space. Is that so bad?!

She finished checking out my entire bag, wiping it, testing the contents, and finally released me, after telling me all about how she wanted her funeral to play out (which was quite beautiful, actually).

TSA cleared me to fly using my BJ’s card for identification purposes, but security stopped me for having sausages in my shoes.

I couldn’t make this ish up if I tried.

Now, what is the relevance to my fried chicken? Well, by the time I ate it, it was cold and a bit soggy. However, the flavor was excellent, and I could tell that it’d once been crisply fried. Not super crisp to the point where it stayed such, but eh, I’d kept it in a box and a bag for over an hour… Can’t expect the world. I enjoyed my chicken very much – to the point that I actually ate all three pieces before my flight, haha – and would totally return to eat the chicken fresh and get a better picture of what it normally tastes like. And thankfully, I don’t have to wait until my next trip to SF to try it again!

Please don’t pack sausages or cheeses in your shoes when you fly. Security doesn’t like it.