For our last meal together, SFG made reservations at Rich Table. He’d been previously but thought I’d enjoy it – the place was totally hopping with a super trendy crowd (ie, I didn’t fit in at all). We bumped into a couple of other people in his industry… and the server recognized him, which led to a lot of extras and special treatment. 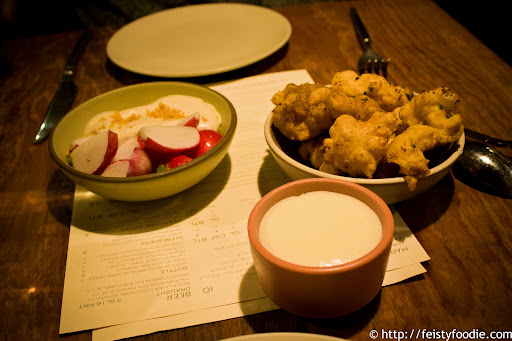 A lot of people rave about the Douglas Fir Levain (bread) to start, but after SFG described it to me, it didn’t sound like something I would enjoy so I passed. Instead, we started off with dried porcini doughnuts and raclette (on the right) – I absolutely adored the dried porcini powder sprinkled on the fried dough. However, they were dense and a little soggy – overworked dough, leading to the chew being a bit tough. (I don’t care for raclette so I didn’t use too much of it.) 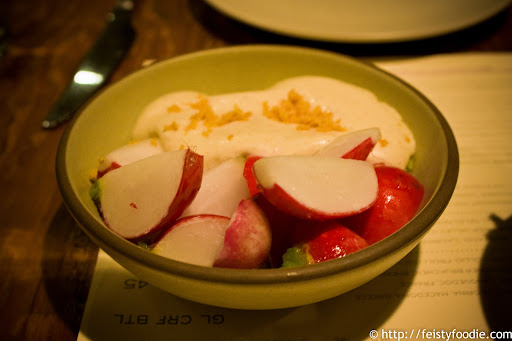 The other item we started with – salted radishes, brown butter, which were a lovely light bite to start – I couldn’t stop munching on these. 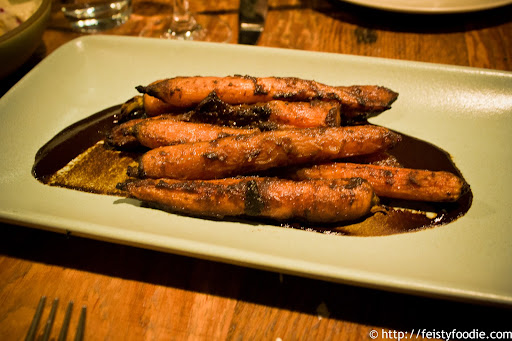 Miso roasted carrots were rich, savory, heady – and led to me remarking that I would like to try making these at home.  For whatever reason, SFG chided me that I’d need to know what kind of miso to use and probably wouldn’t get them right. Oh well – I’ll make my own style then. 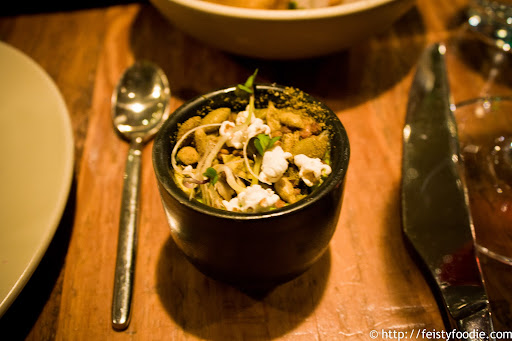 The last time SFG had eaten at Rich Table, he’d been told by his coworker to ask for the “dirty hippie”; one of the signature small bites that apparently isn’t always on the menu. They hadn’t had any when he went, so this time, the kitchen sent them out for us: buttermilk, wheat grass, sprouts and seeds. Yeah, I can see where the name came from… Regardless, it was a very textural experience, and while I felt, for a moment, like I was eating dirt and twigs, the overall effect was not bad – then it was over. Tiny cups! 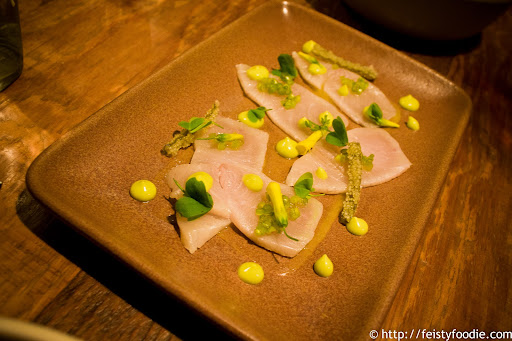 Komochi kombu cured hamachi, oxalis, avocado: a very light dish, which was tasty – though I could have used a little more texture.  The oxalis was interesting, but I liked the long strips of slightly crunchy – almost like a soft pickle – veggies… and wanted more. 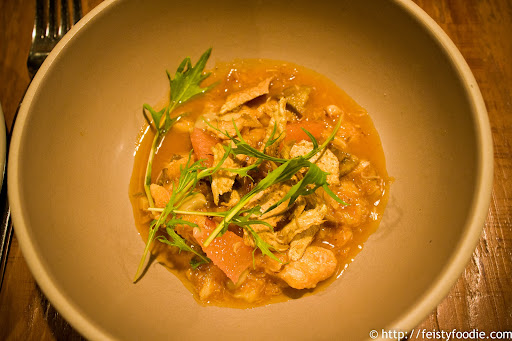 Dungeness crab cioppino, artichoke, cara cara orange: they split this into two bowls for us without our asking – our server was on top of things and very friendly, attentive, and kept giving us things without us asking (I won’t tell you how much wine I had that night). The cioppino had huge chunks of crab throughout it, and was a pretty light soup/stew – I’ve actually never had cioppino, for various reasons including it doesn’t sound like something I’d enjoy. This was fairly light, but flavorful, and I really enjoyed how the orange brightened up the entire bowl so I didn’t feel bogged down by a bowl of soup only partway through my meal.

I don’t think I’m doing a good job explaining how thoroughly I enjoyed the cioppino – would order again. Might try making cioppino at home, but of course, more my own style and my own touches. 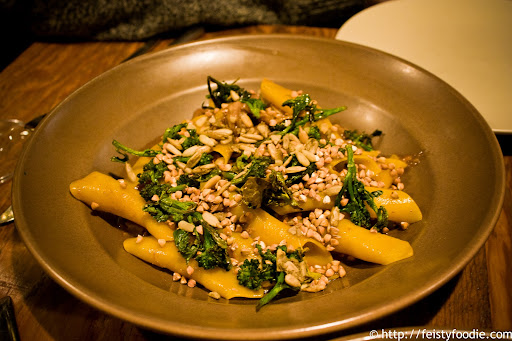 While SFG had considered this dish as an option – rigatoni, date braised oxtail, buckwheat, watercress – ultimately, we’d decided against it. However, it found its way to our table regardless – compliments of the kitchen – and I was pleasantly surprised. I hadn’t been sure what role the buckwheat would play, but it showed up as these intensely crispy, crunchy bits that managed to lighten up what otherwise sounded like a super heavy pasta dish. The flavor was mild, faintly smoky, faintly wheat-like, but a bite of all of the dish’s components balanced perfectly in terms of flavor and texture. I was very impressed. 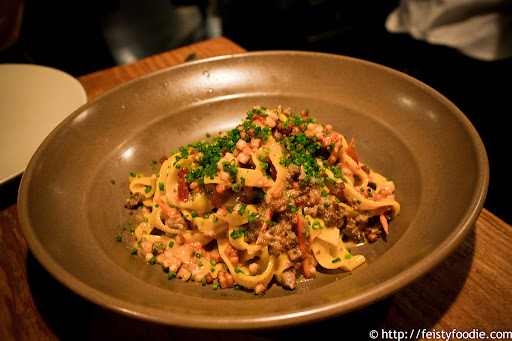 Tagliatelle, beef bolognese, sun dried tomatoes – I’m not a fan of sun dried tomatoes in general, finding they tend to overwhelm dishes. However, used judiciously – as they were here – they can be a wonderful complement to a dish. This dish was pretty tasty, but unfortunately was overshadowed by what else I was eating. 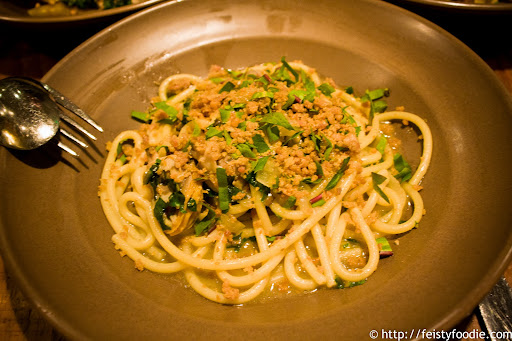 Bucatini, clams, dandelion greens, chicken skin – I was excited to have chicken skin in this dish. Unfortunately, I couldn’t discern those bits; I commented to SFG that I thought the dish was missing something, maybe salt? and his scoff, “No, it doesn’t need more salt” caused me to rethink my comment. It was missing acidity, something bright to lighten the dish – but the pasta was perfectly cooked al dente (like all of the pasta dishes that night), with the perfect chew to it. The clams were minced finely, while the dandelion greens offered a bit of bitterness to offset the richness of the brodo on the bottom. Seriously, a squirt of fresh lemon juice would have taken this dish to the next level – as good as it was, it could have been just one touch better. 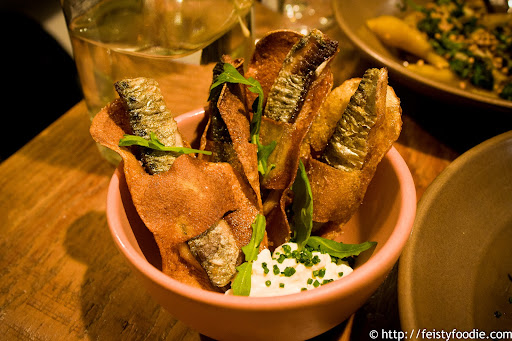 Alright. This is where you all discover how much I eat just for the sake of this blog. Everyone who mentions Rich Table talks about the sardine chips and how incredible they are. Like, RAVES. I won’t name names, but someone told me they are simply slices of potatoes with sardine threaded through them, fried, and “sure they’re good but not like, amazing” – and after a lot of debate, a lot of back and forth, a lot of “I don’t know” – I decided that if I DIDN’T get them, someone would come by and comment that I SHOULD have gotten them, and I would get all “urgh grrrr but they aren’t that great, just people talk about them, but I can’t say that unless I try them, blergh” so to prevent all of that I decided to just suck it up and order them.

So I added the sardine chips. And they’re good… thin slices of very good potato deep fried with nice sardines threaded through the slices of potato. Crispy potato, horseradish dipping sauce. In the end, though, I think the quality of the fish could be better, and improve the dish – a better boquerones (fresh anchovies marinated in vinegar) – I’d have liked it better if they used sharper sardines, less about how oily these fish are, and a bit more acidic. Yes, I like acidity and brightness in my food. The potatoes themselves were perfectly fried though, crisp, delightful bits, and after eating 2-3 of the chips as-is, I picked out the sardines and ate just the potatoes because I love potatoes. (I should make a new blog called “I love potatoes”…) Some of the sardines were quite thick, and where they met the potato, the potato was slightly softer, less fried. I just think the overall idea is very good, but the execution could be ever so slightly better. 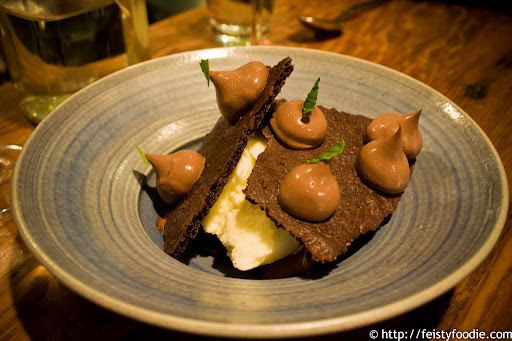 While neither of us are that big on dessert – yes, I realize how ironic that is – you can’t not have dessert when dining with SFG at a place like this. We hesitated briefly over two choices, but decided to go with the mint chocolate cream, milk ice cream, chocolate sable. I was amused when it arrived by the appearance… very whimsical to me. The little chocolate dollops were infused with mint, and quite nice; the milk ice cream balanced the rich dark chocolate nicely. I thought the chocolate sables were OK initially – sables are not my preferred style of cookie, but they were extremely chocolatey and eaten with the milk ice cream, pretty well-tempered – but then “discovered” they were a bit too thick, and as such, a little hard to eat, and perhaps not the best they could be. I’m no dessert expert, as you all know, and this doesn’t fall into the realm of desserts upon which I can expound for hours due to vast previous experience eating or making, so I found this perfectly suitable as an end to the meal. 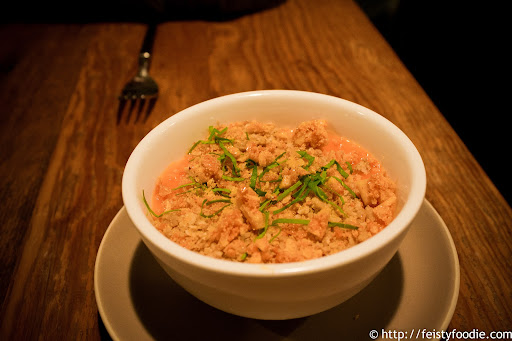 Of course, despite our only ordering one dessert, another one wound up at our table: buttermilk panna cotta, dried apricots, honey oatmeal crumble. SFG mentioned he’d had a different panna cotta the last time he’d been in for dinner, but – while you all know how I adore panna cotta – this wasn’t chosen because of the buttermilk (though it was on the short list – it was this or the mint one)… and the apricots… and the oatmeal… things for which I don’t particularly care. So this dessert started out with some pretty big negatives before I even saw it – plus it was served in a bowl. I tend to dislike panna cotta served in a bowl for the sole reason that it generally is chosen as the serving vehicle because of the texture that the pastry chef has chosen to achieve. Panna cotta has many levels of firmness, and the softer ones usually are served in bowls or cups; I like mine a bit harder. I wasn’t far off here – the panna cotta was indeed on the softer side, though the textures given from the dried apricots and the oatmeal crumble really changed up the end result. However, the dessert was absolutely huge – think the size of a bowl of ice cream for snacking with a late night movie – and just could not save itself from my discrimination.

I said I wasn’t a dessert expert and I’m not. But panna cotta is something I both have eaten thousands of times at restaurants (if it’s on the menu, it’s almost guaranteed I will order it) and I am quite proficient at making it myself at home (which is a dangerous skill to possess, since I can, will and have eaten large quantities in one sitting). While those who enjoy the sharp tang of buttermilk and the softness of tofufa (Asian soft-tofu dessert) might enjoy this greatly, I found the buttermilk to be too overwhelming, and the other components – while nice – couldn’t get this dish to where I was waiting at the finish line. A bit of work might turn it into something incredible – they’ve already changed the type of panna cotte they’re serving.

Overall, I enjoyed my experience at Rich Table – despite or perhaps because of all the special treatment – and would have no issue returning (though I doubt I’ll receive the same fanfare if I do!). It’s clear that the husband and wife team that run Rich Table put a lot of thought into each dish that makes its way onto the menu, and though there were some missteps along the way for my palate, you can definitely taste the care and love that goes into making each plate appear on your table. (Oh, and if this at all matters to you: the chef himself was not in the kitchen that night. Food was still very good.)

I look forward to seeing more from them in the future.