After our extremely heavy brunch, we took a drive around the city to see things that are just so hard to get to without a car – but thankfully my awesome sauce cousin lent us his car for the weekend 🙂 – this included the gorgeous Lands End, which we stumbled on while driving along the coast – and then decided to finally see what’s up with soup dumplings in the Bay Area. SFG had heard a lot about Shanghai Dumpling King, but after House of Prime Rib, Naomi told us about Shanghai House… and they’re like a few blocks apart… so we decided to try them back-to-back. And then finished the day with fried chicken. Yep – if you ever wonder how I choose my companions, it’s by ability to eat and/or willingness to indulge MY ability to eat.

We got there at just the right time, too – the waits for the first two were pretty short. 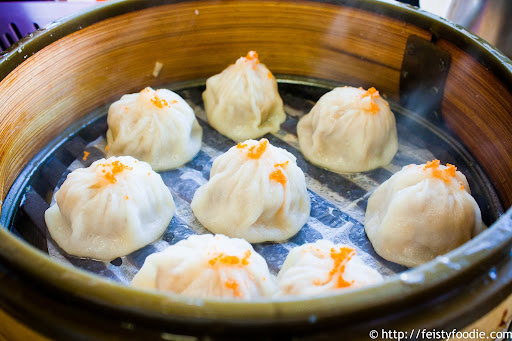 First up, the place everyone mentioned when either of us asked – a wide array of people; his friends, food industry people in the know, and my friends, food writers or just Asian people who eat lots of Asian food – Shanghai Dumpling King. Pork and crab soup dumplings because I like the ones with crab more in general… and these were OK. The skins were super thin, but weird and gummy; thin to the point where many of them were ALREADY ripped before we could even get to them, and yet the wrappers were thick in places, with a gumminess that stuck to our lips and if we were lucky enough to have gotten it into the spoon without ripping them, they tore when they touched our lips! Blegh I hate sticky dumpling wrappers. The meat wads within boasted absolutely no crab flavor, and were on the wrong side of too fatty. I was not impressed, and SFG didn’t seem too keen either. What little soup we managed to eat was super meh, slightly bland, and just EHHH. 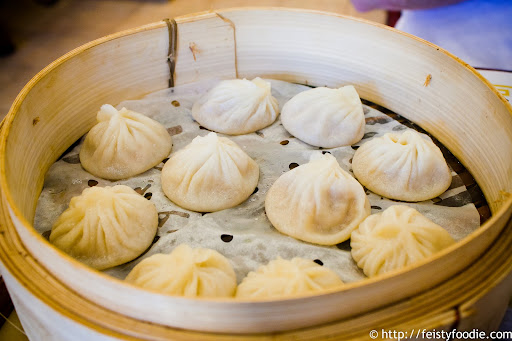 Unfortunately, Shanghai House only had one kind of soup dumplings on the menu – regular pork ones. But, eh – it’s not like the ones at Shanghai Dumpling King tasted like they had crab in them anyway. These were slightly smaller, and while the skins were ever so slightly thicker, they were evenly thin, not gummy, and much tastier. The meat wads in here glistened with fat, but not so much that all you tasted was fat; they were pretty damn good, actually. The soup was flavorful, with a good punch of pork flavor, and while I wished there was just a little more – these WERE smaller dumplings, after all – they were still quite good.

Having said that, though, I will say that I enjoy the soup dumplings I’ve had in NYC much, much better. Leaps and bounds. I’ll have to keep looking for better ones in SF… if they exist.

After we finished, we quickly drove over to San Tung, hoping to beat the rush. Unfortunately, we did no such thing, and foolishly believed the “door guy” when he told us 20 minutes.

Let me tell you a story: SFG and I waited for AN HOUR AND A HALF. By the time we realized we should probably leave – or get take out and leave – we were too entrenched in the wait. It’d been too long. We just had to stick it out.

During this time, I witnessed the “Door Guy” – let’s call him DG – tell every.single.person. who came in the door that it would be “about 20 minutes” – and a few times, in Cantonese, he would add, “but look me in the eye, I will tell you right now, I am NOT telling you the truth.” Literally, he said that. I’m NOT JOKING.

He would also randomly call people’s names on the list, and if they weren’t inside waiting, he would erase their names. So you can’t put your name down, go grocery shopping, and come back. It doesn’t work like that. You have to wait there (though we witnessed people do that, come back and discover their names were erased, and complain to him, so he’d put it back on, but the hassle doesn’t seem worth it).

Okay. Got all that? We waited 1.5 hours for chicken (that I’d had my last trip out – with no wait – but SFG had never eaten there, so I was kind of sticking my neck out a bit there). 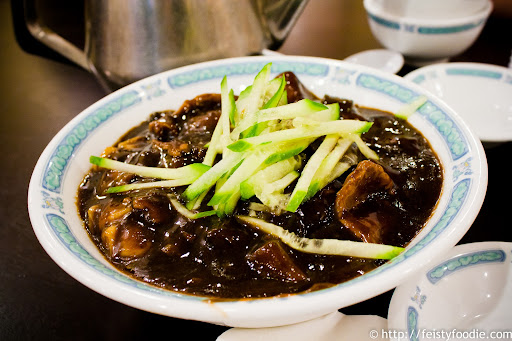 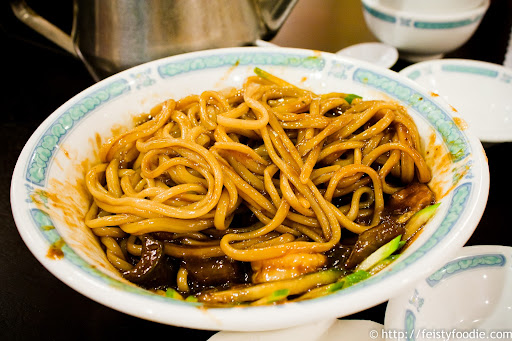 While we waited, I watched the black bean sauced noodles go by and just really wanted them, even though we were there just for chicken. So I ordered them, before remembering that I’m partial to the Korean ones (jjajjungmyun) and my experience with the northern Chinese black bean noodles hasn’t been good (it’s been years, but they were way too spicy the one time I got them at a Chinese restaurant)… but did not regret this. OH MY GOODNESS, I could eat bowl after bowl after bowl of these. The noodles were the chewiest, most delicious noodles I’ve had in a very, very long time – I love love love chewy things – and the savory sauce slicking them was very good too. I’ll be honest: I didn’t need the seafood or meat bits that were in the bowl, I just wanted to eat the noodles and a bit of sauce. I was absolutely over the moon for this dish. 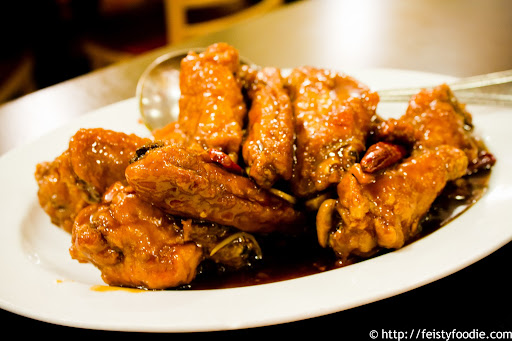 Though I’d informed SFG that my previous experience with the ‘wet’ fried chicken was meh, he wanted to try both, and I’m never going to say no to ordering more food. 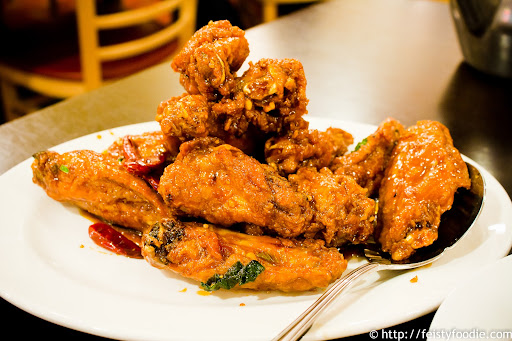 The dry came out about 10 minutes later, which we both laughed should have taken less time than the wet, no? 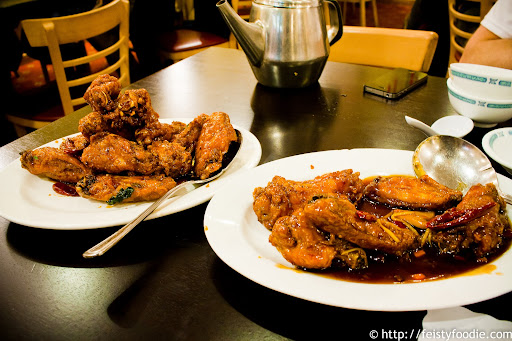 Both platters together – I don’t care for the wet fried chicken. It smells slightly funky to me; like one of those wet rags that many Chinese restaurants use to wipe down their tables after each turn… funky. It’s pretty faint while you’re eating it at the restaurant, but I did notice it both times I ate them. They’re crisp, savory, but I just don’t care for that slight funk.

The dry fare much better with me; crisp, tasty, no funk, and just perfectly sticky, slightly sweet, and super yum. They remind me of Korean fried chicken, but with more garlic, more Chinese influence to the seasonings. Really tasty. I’m totally OK getting just the dry fried chicken every single time I go – along with my very own bowl of noodles… yummm.

Here’s the funny thing: the next day, prior to heading out, I pulled out the leftover wings to snack on. (I suffer from a really bad relationship with my blood sugar; I’ll be fine, fine, fine, and suddenly I’ll be so hungry I can’t think straight or see or anything, so I have to be really careful about eating a little something in the morning before I leave or I might lose my sh*t and scream at a stranger – or worse, the person I’m with.) SFG and I were snacking when he commented “ummm, I think the wet ones went bad” – that funky smell had intensified to the point where taking one bite of a wing was pretty much vile. So we tossed those out and ate only the dry ones.

So… yeah… I won’t be getting the wet ones again, unless someone else insists.