When I was in SF back in October, I walked by Southpaw BBQ and was immediately curious. I’m technically a “southpaw” myself (left handed! though there is a fair number of things I do right handed), but also… I love BBQ. I suppose I should have thought more and realized that if I can’t smell a BBQ restaurant halfway down the block…

In any case, I walked by it a lot – these last two trips, I stayed in the Mission – and finally was curious enough that, when asked to pick a place to meet my cousins for a bite, I suggested Southpaw. 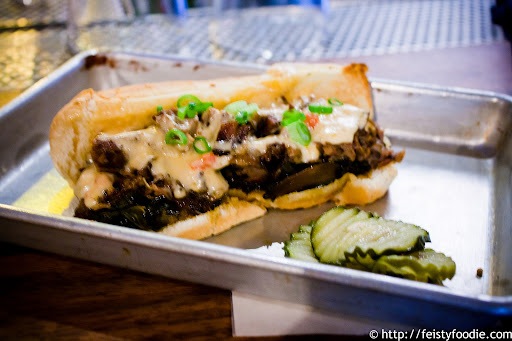 It was pretty empty when I arrived, JKL arriving a few minutes later. The place started to fill up quickly though and since we were shockingly the first ones to arrive, we just staked out a place at the bar and had a drink while waiting. Since I was on the edge of being too hungry to be polite, I suggested we get a bar snack from their happy hour menu; a Philly cheesesteak of sorts using the house brisket. Though this Philly cheesesteak expert would hardly call this a cheesesteak of any sort, I will say that I enjoyed my half very much. Tender brisket – so tender that it melted – a drizzle of a cheese-based sauce, a spike of green scallions and incredibly soft bread all made this a very enjoyable bar snack for $5. But a cheesesteak? Nah. 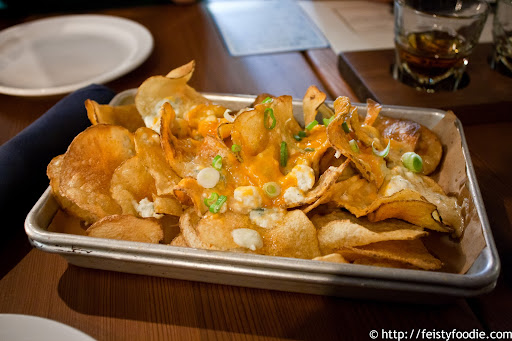 Once we were all there, it took a few minutes to get a table because the place was suddenly PACKED on a Wednesday night around 6:30. But we opted to start with house made potato chips, covered in cheese and more cheese. These were GREAT. This is a fantastic bar snack! crispy homemade potato chips covered in warm and gooey cheese – even though I’m not a huge Roquefort fan – just great. We all dug into this with enthusiasm. 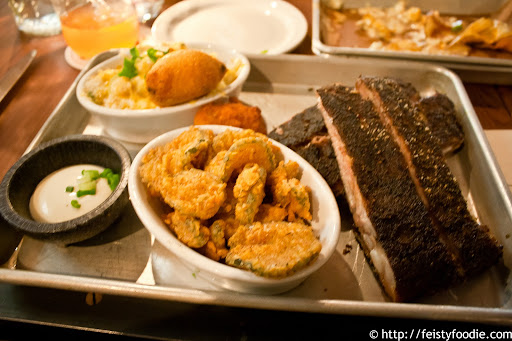 I went straight for the rib platter, with hush puppies (meh) and my choice of two sides. Fried pickles were only OK – not soggy but not quite crisp enough, and just okay. My bacon cauliflower gratin – our server’s immediate response when I asked what side she recommended – was tasty enough, but no bacon of which to speak. Creamy mashed cauliflower… sure, it’s tasty.

As for the ribs, however… well, yikes. These were dry, chewy, and while there was flavor to them, I sadly couldn’t get past how dry they were. Overcooked and practically jerky-like… I’d really looked forward to a nice rib with a bit of chew – I’m not a “falling off the bone” person when it comes to ribs – but the meat just was very dry and a bit tough. No… I’ll pass. I took most of this home, with the idea if I chopped it up and cooked it with eggs or pasta, I could revive it a little, but this trip, I actually did no cooking whatsoever (unless you count cutting up an avocado and spreading it on bread). Oh well. Sadface.

Everyone else seemed OK with their food, but no one seemed like “wow this is SO good, I really like what I’m eating, try this!” – except Hideki, who got either the short rib pot roast or a special pork chop, I can’t even remember – which was good, but not quite what I want at a BBQ joint. 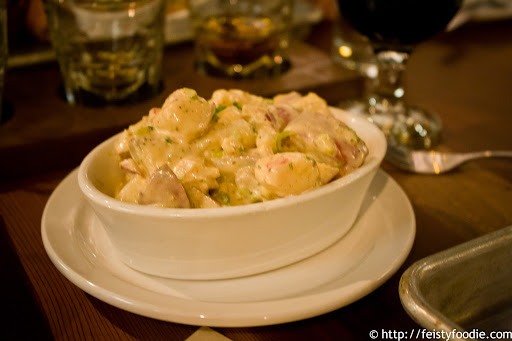 I also ordered the potato salad because … um, I really like potatoes and I like to see how people make their potato salad. This was super heavy on the mustard – German potato salad, anyone? – and sufficiently tasty, but did not make up for my terrible ribs.

Sorry… sadly, this is a resounding pass. I might wander by and grab a drink – they have a really great cocktail menu, and the bartenders – ahem, I mean mixologists – know their way around the bar very well – but the dinner menu seemed to be across the board mediocre to disappointing.