Long ago, Beer Boor told me about Crook’s Corner as the place all the college kids went when their parents came to visit. Unfortunately, on my last visit, I’d managed only to visit Crook’s Atrium Cafe, the casual outpost of Crook’s Corner, but had really enjoyed it so I looked forward to returning and visiting Crook’s Corner.

My dining companions hardly needed any more encouragement to imbibe…

Crook’s Corner was easily one of the “fancier” places I’ve visited in NC – upscale feel to it, service styled more closely to nicer restaurants than to the homey feel of a woman calling you “hon” and “sugar” – and the prices to match. 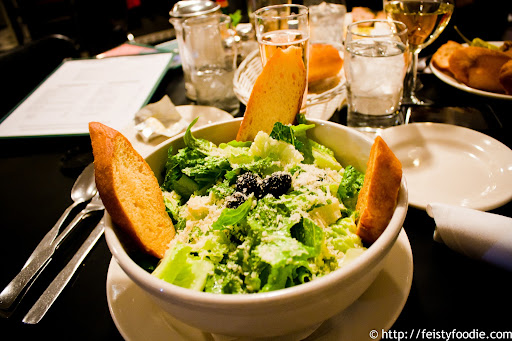 I’d not been eating many vegetables on my trip, and – I keep saying this, amusing and shocking friends – I really do like salad. Especially a well-executed one. I ordered the Caesar salad and could have eaten just this for dinner, but there was a certain expectation from my dining companions for me to continue eating… In any case, this Caesar salad had so much potential but fell far short. Romaine lettuce, shaved parm, a few oil brined olives, thick slices of toasted baguette as “croutons” (um, no), dressed lightly… There was no creative thought put into this menu item. It was just slapped on the menu because “we need a salad and everyone knows what a Caesar salad is” – really. 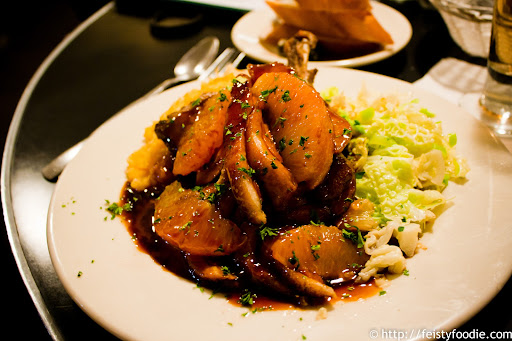 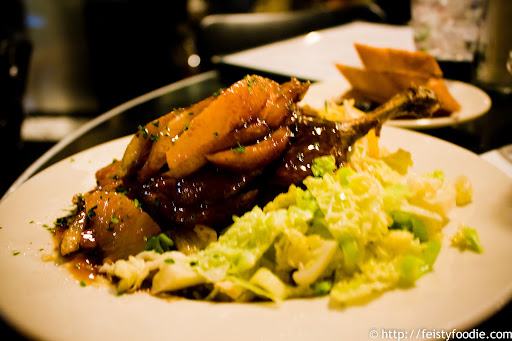 My main course had a cute name – “Goin’ South” – but was another dish that fell far flat. Though there was an attempt at creativity here, I suppose – duck, two ways – there were so many missteps along the way, that I was left with an overwhelming feeling of disappointment. The duck breast was cooked properly to a nice medium rare, with a good streak of pink in the center – perfect. However, the fat on top had not been rendered, so there was a thick layer of chewy, unappetizing fat along the edge. One of my dining companions informed me that in the south, fat is embraced and loved; yes, I agree, but there’s a marked difference between fat, gloriously rendered, shiny and happy glistening on my duck breast, versus being forced to either cut the fat off or chew through it. No. This was not meant to be there… Score the skin, sear the breast skin side down, let the fat come out while the skin gets nice and crisp… it won’t overcook. I’ve done this before. A somewhat egregious error, really.

The duck confit was, as I have come to expect but still dislike, dry and tough, chewy. Rarely have I eaten a properly made confit, unfortunately, and this fell into the norm as opposed to the wonderful exception.

The entire dish was draped in a cloyingly sweet glaze of a sauce, with extremely bitter segments of grapefruit punctuating it. There was no balance to the dish. The vegetables were bland and barely cooked, and while I ate them – I love vegetables! – there was so much wasted potential for a better dish.

Overall, the entire experience was incredibly disappointing. My bill, before tip, came to $45 and change (the above food plus a glass of wine), and for that amount of money where I was, my food should have been simply amazing. Instead, it was just misstep after misstep after misstep.

The one upside was having many cute servers as eye candy, and watching one of my dining companions shamelessly flirt, hit on and then score our server’s number. Oh, and the space was cute.

I don’t believe I’ll be returning to Crook’s Corner. Crook’s Atrium Cafe, on the other hand…