Told you I was going to try posting this more often! Driving down to NC to visit my girl Aimee, stopped at Cracker Barrel for my favorite chicken fried chicken covered in country gravy, sauteed veggies and hash brown casserole. YUM. 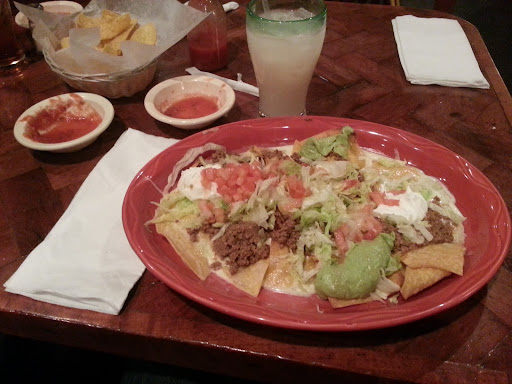 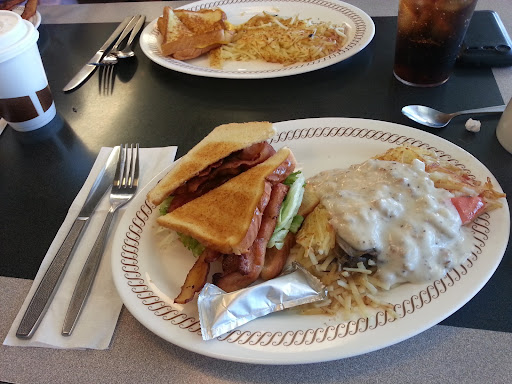 It’s becoming a bit of a tradition to end the trip with WAFFLE HOUSE!!! BLT with my smothered, diced, capped hash browns. YUM. 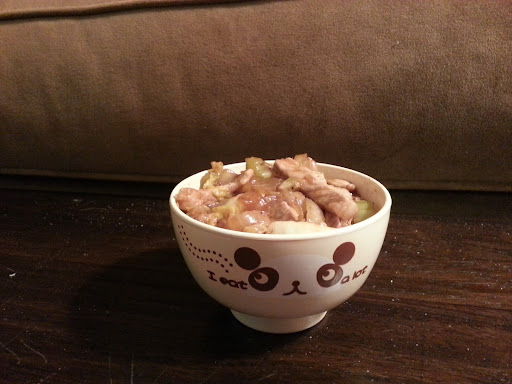 Pork stir fry over rice! I discovered a fantastic stir fry sauce that I made myself. I’ll share the recipe soon. 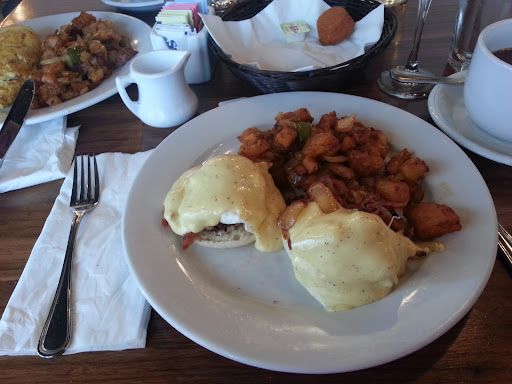 Brunch at Agora Tavern with my bestie.

Chicken noodle soup and a “Greek” salad from Panera Cafe.I put “Greek” in quotes because they failed to include that which makes it a Greek salad: olives, etc.

Blurry overhead shot of brother’s birthday dinner at Canton Gourmet. Everything was absolutely delicious! the clams with slightly spicy meaty bits was awesome. 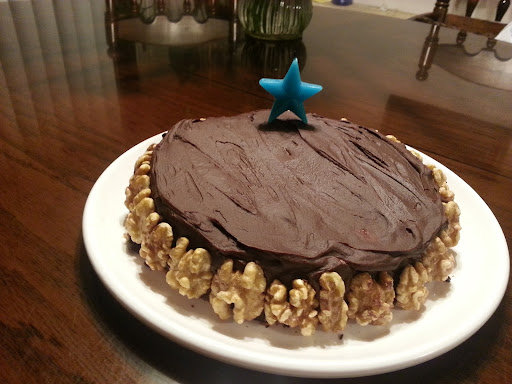 Banana walnut torte that I made for my brother’s birthday.

Walnuts, Chobani 0% fat plain yogurt, bananas, drizzle of maple syrup… makes for one of the bestest high protein breakfasts ever.

More of that delicious stir fry sauce, this time with udon. So freaking good. I literally made the sauce 3-4x until I was satisfied with the proportions and taste. So, so freaking good. Yum. 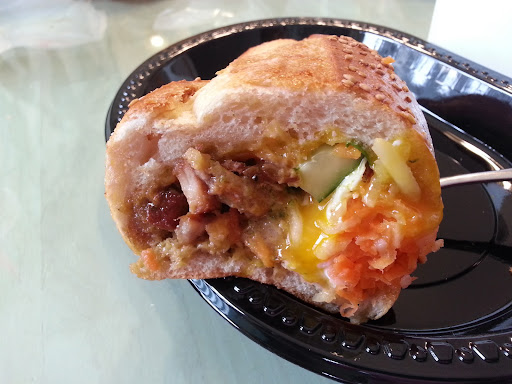 An inside shot of the Belly Dancer from JoJu sandwiches. Not bad… not bad at all. 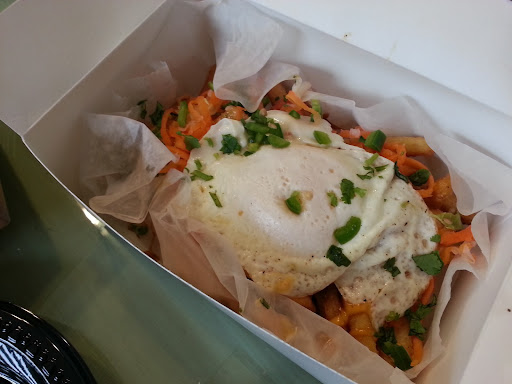 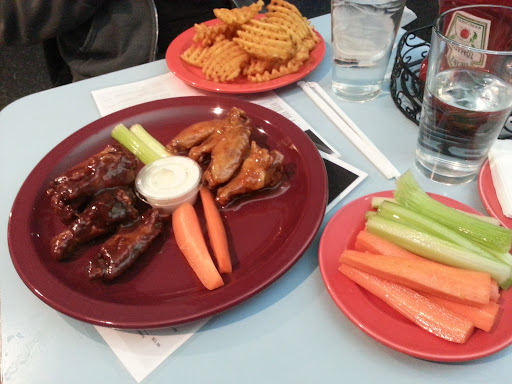 Wings and a salad from Atomic Wings in TriBeCa. 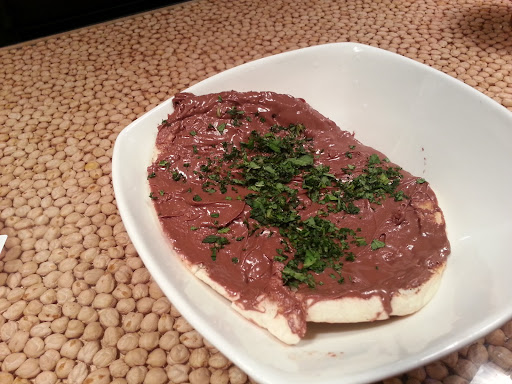 An interesting dessert at Nish Nush for Dessert Zombie… pita spread with chocolate. I thought it was good, but he was much harsher than I.

Coffee in my new French press, a gift from Dessert Zombie! (Thanks again!) 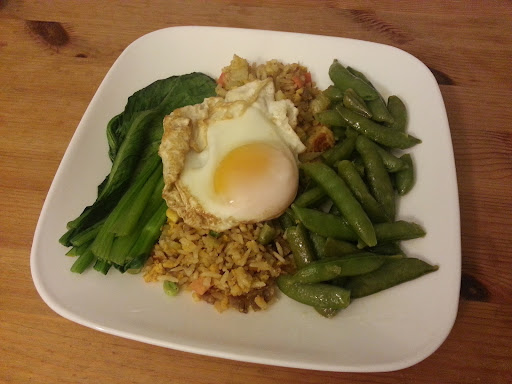 *I used an egg from Pete & Gerry’s – provided by them. Delicious – a richer, yellower yolk than I’m used to. (Opinion is my own; I was not compensated for this mention, though I received a dozen courtesy of their PR.)

A “Swiss” bun… I think that’s what it’s called… from a Chinese bakery, alongside my chicken potato cilantro soup. Yes, I like cilantro. A LOT.

A small stack of pancakes with elderberry syrup (not pictured) and a toffee nut mocha from Starbucks.

Fully loaded baked potato soup. YES THAT IS HOW I ROLL. And that’s why I’m fat. 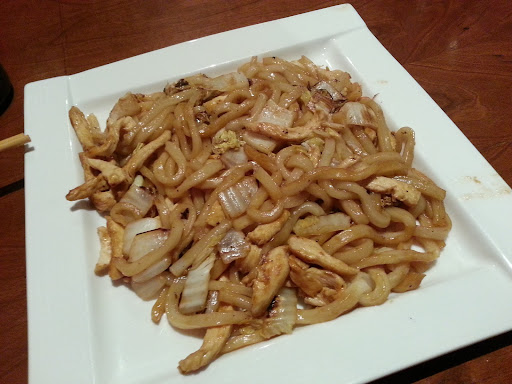 After a failed attempt at a Malaysian restaurant that was randomly closed on a Tuesday, yaki udon from the hibachi place next door. Greasy and not good. 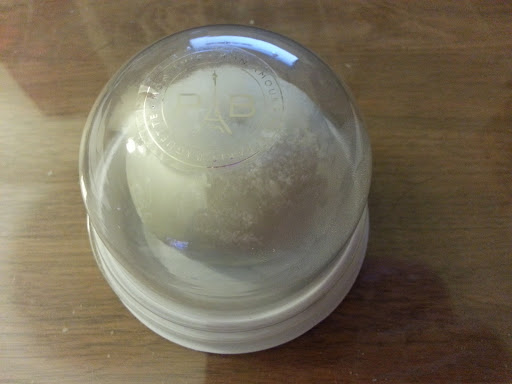 A couple of treats from Paris Baguette after dinner with the bestie: “royal pudding” which was soooooo good, and a huge red bean mochi that I didn’t like as much as I liked the royal pudding (the red bean filling was a little chalky, and the mochi part not chewy enough for my tastes).

Chicken potato cilantro soup, along with some brown butter mushrooms and soy glazed hot dogs – with the addition of Sriracha. Spicy!

A slice of cake to say farewell to someone who was leaving at work. It was pretty good. I shouldn’t have eaten it.

My Elvis pancake: pancake topped with Dark Chocolate Dreams by PB&Co (dark chocolate peanut butter; omg it’s so good, one of my obsessions! I eat it by the spoonful when no one’s looking, which is always because I live alone!), mashed banana, and bacon. This was pretty darn good, though more bacon next time – this leaned on the sweet side, and I’d prefer it a little more on the savory side.

Bailey’s in a Maker’s Mark sweater… goes great in my awesome Williams-Sonoma hint-of-mint hot chocolate. Yeah, I got it like that. 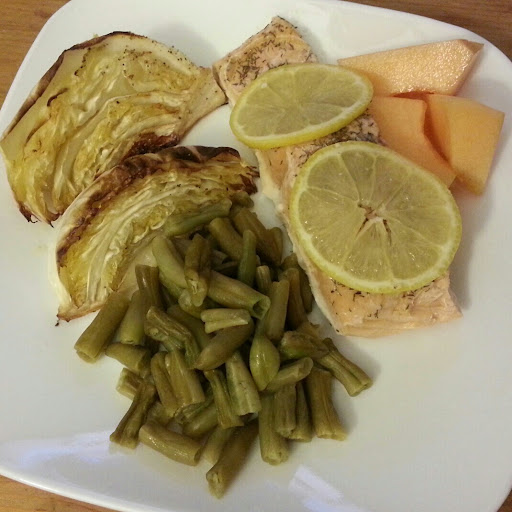 Wow, that’s only 3 weeks of pictures. I eat a lot… and a lot of stuff I don’t post about. That’s kind of crazy.

What’ve you been eating?