I love exploring my neighborhood, Forest Hills. I don’t do it nearly as much as I can or should, really. To that end, Pahal Zan has been on my radar for quite a while – a number of people have recommended it to me, and mentioned how great the falafel there is. And I really do love falafel. 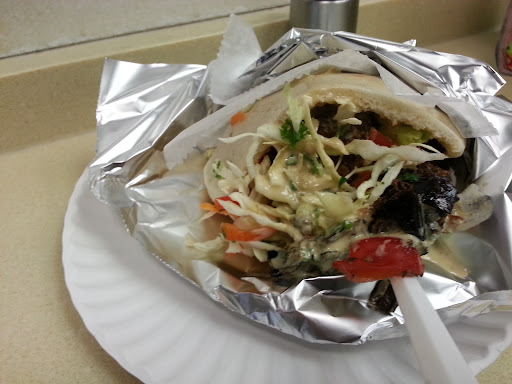 So one warm-ish winter day in January, I decided to treat myself to a movie at my favorite classic old movie theater (Monday through Friday, all showings before 5pm are $6, and all day Tuesday/Thursday as well) – I saw Wreck It Ralph for those keeping track, and really really liked it! – but not before I grabbed a bite at Pahal Zan during the walk over. Pahal Zan is a tiny place underneath the LIRR tracks in Forest Hills, with a super friendly purveyor who took my order and chatted with customers while I waited. 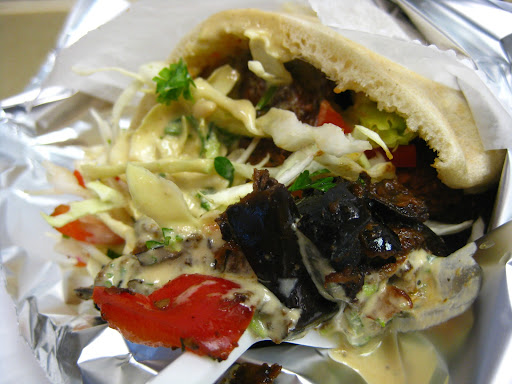 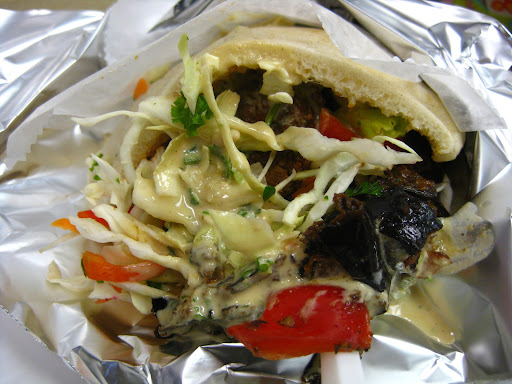 Whenever anyone paid him a compliment, he thanked them profusely, very genuinely, which I found endearing. My understanding is that they’ve actually been there for many years, and while I was there, no less than 3 of the 5 customers that came in to order (I went around 2:30, so it was past prime lunch time) made sure to tell him how much they liked his food. So it isn’t like this was his first time hearing it, but I liked how humble and sincere he was as he thanked each person. It was nice.

As for my falafel sandwich ($6.99), it was HUGE. I asked for only a little spice, but boy howdy, that little smear he put in there was enough to send sweat pouring down my face. Not completely unbearable “I can’t eat this” but just at that threshold; I’ll definitely say no spicy! next time. The falafel themselves were crisp, flavorful, delicate but hearty enough to stand up to the myriad of toppings; hummus, salad, baba ghanoush, tahini… the complete sandwich was very messy and very delicious. I really enjoyed working my way through the entire sandwich; most of it made it into my mouth in one piece, though towards the end, I was getting very full so I resorted to using a fork to eat what was inside.

I made sure to thank him and tell him how delicious I thought the sandwich was, and that I’d be back, and again, I was struck by how happy the compliment made him, how he didn’t seem to take it for granted that it was delicious. You know, that goes a long way: you can know your food is tasty, but still appreciate kind words given…

I highly recommend anyone in the area stop by for a falafel sandwich. I’ll definitely be back to try some of their other offerings, though I’m not sure I’ll ever be able to get past the awesome falafel… yum!!!

« Football Snacks
… and back to bento we go »