The really observant among you may have noticed that I didn’t talk much about baseball this past season. No, I was obstinate in my cold shoulder towards baseball, so when football season started, I was ecstatic. Over the moon. I continued playing fantasy football [poorly], and began obsessively watching games. 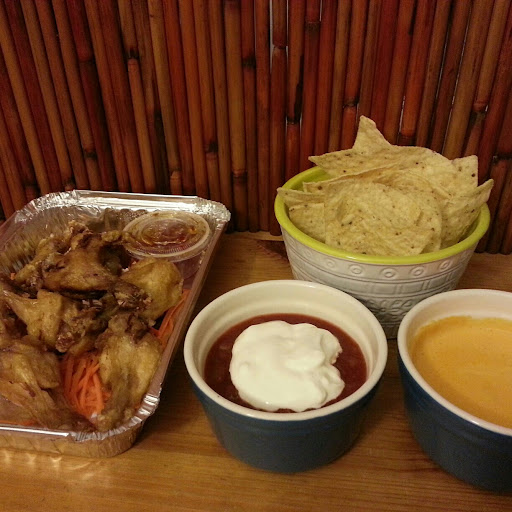 You know what’s a great part of watching games?

The food. The snacks. Also… call me weird, but I vastly prefer watching games alone. When you watch with other people, they actually expect you to socialize and like, pay attention to them when they talk. Ugh.

First menu: wings from my local Thai place. Ever so slightly spicy, crisp, nice, though not too meaty. Tostitos Hint of Lime (my favorite; I eat these plain sometimes because they’re already flavored! So good!), jarred salsa topped with sour cream, and some queso from a jar too. Why not? It was good. And more than enough to get me through 12 hours of games – anyone else annoyed with this year’s rule changes? I mean, seriously – every scoring play needs to be video reviewed? I know some of them deserve it, but there are a fair number of TD catches squarely in the middle of the end zone that you do not need to review. Games taking 4 hours or more is RIDICULOUS. 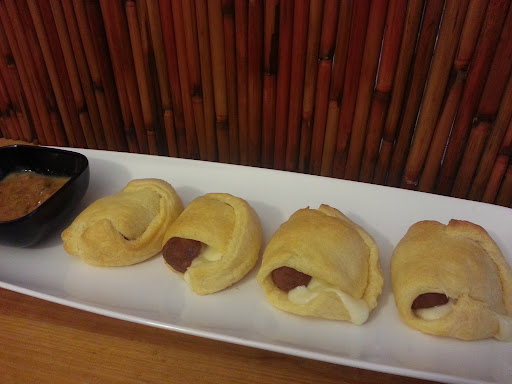 I tried to get creative the next week, and made these fancy pants Piglets in Duvets. Just some crescent roll dough wrapped around hot dogs I cut in half, along with mozzarella. So you know, mozzarella and hot dogs isn’t a common combination because it doesn’t really work. Something about the mild flavor of mozzarella doesn’t go with the super savoriness of hot dogs. Ah well, live and learn.

However, the dipping sauce I made for them was AWESOME, and I began making it for lots of things. Pretty simple, too: ketchup, mustard, lots of pickle relish, and Sriracha. It had just the slightest heat (because I didn’t go nuts with the Sriracha), a lot of tang from the pickle relish, and a bit of sweet vinegariness and mustardy from the ketchup and mustard. It was delicious! 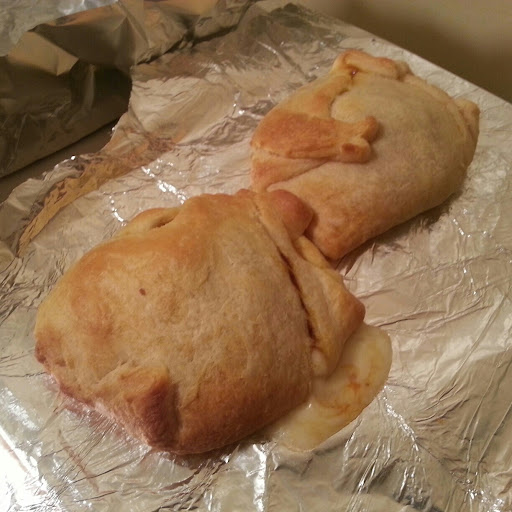 These are rather ugly, but my brother loved the one I gave him: meatball bombs. I took meatballs, sauce, mozzarella and fresh basil, and wrapped it in crescent dough and baked. I’ll have to do a better job wrapping so they don’t explode, but he went nuts for them. I liked mine just fine 😉 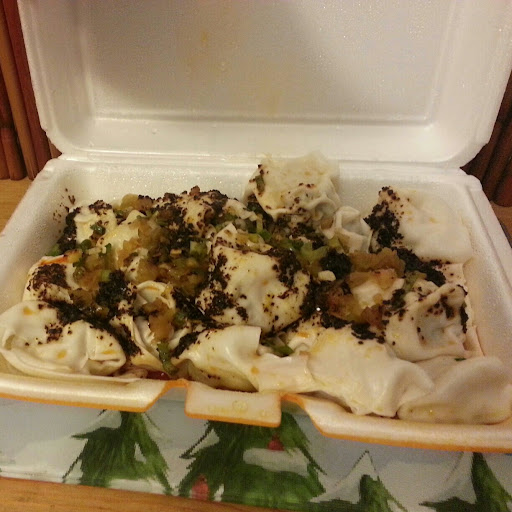 He even traded me and satisfied my White Bear craving. 18 wontons FTW!

I decided to be healthy one week and made my own hummus, which turned out to be so easy, I’m sad I wasn’t doing this all along. Can of chickpeas, drained. Chimichurri that I made myself (parsley, garlic, red pepper flakes, olive oil, vinegar), some more olive oil, salt/pepper and a bit of chipotle powder for some kick. Dipping carrot sticks and those lovely, lovely Sungold cherry tomatoes in it was great – and kind of healthy! Great snack. 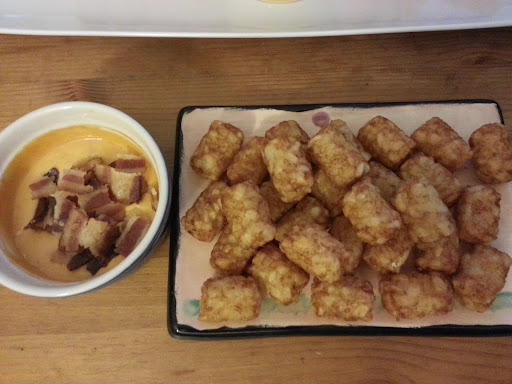 But I can’t be completely healthy, so I also made tater tots – just a bag of frozen Trader Joe’s “potato tots” (which are great, and it’s like 2 or 3 lbs for $2), cooked according to instructions. I tried a recipe from a blog where you wrap them with cheese in bacon, but I didn’t like how they turned out so I didn’t photograph them. It sounds great in theory but the bacon grease just soaks into the tot, making it soggy, not crispy, and a little too heavy.

Plus look at my awesome dipping sauce: more of that jarred liquid cheese (one of my ultimate guilty pleasures), topped with bacon I crumbled on top. Ummm, yes please?! 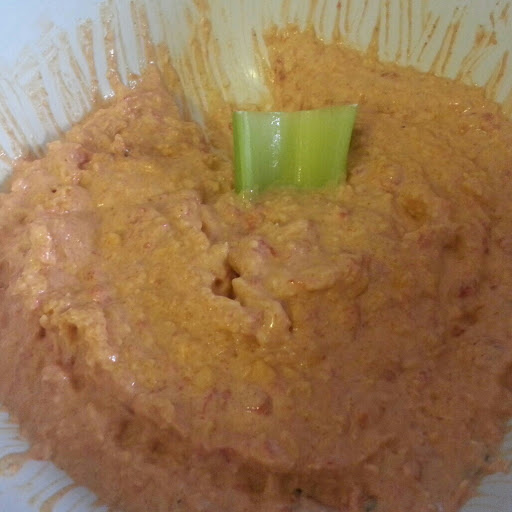 And then there’s my latest crave, pimento cheese. I decided to make my own, using Homesick Texan’s recipe, with a few minor tweaks. Then I realized I need to tweak again because it’s too garlicky for me – the longer it sits, even only one clove of raw garlic grated into it, becomes too strong for me as times goes on. And I did something wrong the first time – not wrong, per se, just not what I wanted. Probably my lack of box grater (I KNOW, why do I not have one?!) and using a regular fine grater turned it much softer than I wanted; I was aiming for something more like what I had at Fremont Diner: large shreds of cheese barely held together by the slightest slick of mayo or sour cream. YUM. The flavors were good in mine, though; I even used chipotle for a bit of kick. 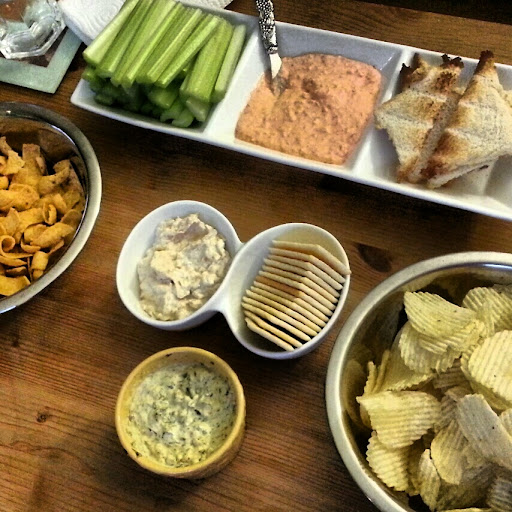 Last but not least, SFG came to visit (yay!), and for new year’s eve we decided to stay in and have a nice night to ourselves. For snacks, I put out club crackers, spinach/artichoke dip from a jar, Ridges chips, fried onion dip, Fritos, celery sticks, toast points, and a new batch of pimento cheese (marginally better, but I really have to ease off the garlic). There were gin drinks (Bombay Sapphire, of course), wine – sparkling and still, and Indian delivered from my local place, all adding up to a lovely night of snacks and cards.

This post comes just in time for Super Bowl! so I leave you with this question:

What will you be eating this Sunday for Super Bowl – or Puppy Bowl, if that’s your thing?

Also: who are you rooting for? The 49ers or the Ravens? 🙂